To Google or not to Google, That is the Question 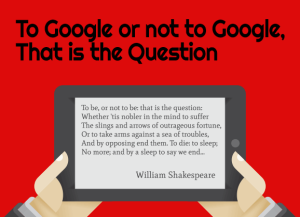 A spectacular thing happened this weekend past, London’s Globe Theatre played Hamlet in Canada. Unless you live in Eastern Ontario, however, you weren’t likely to hear of it.  Not for want of mention of the troupe’s international tour in Canadian news outlets – but for a lack of notice that in taking the tour to every country in the world this might include Canada too.

At the close of an amazing evening, having watched some of the world’s best Shakespeare performed on a stage situated on the St. Lawrence River and afterwards meeting these talented and humble actors, curiosity beckoned – what mention was there of this performance in the media?

A quick search on the ride home returned some expected results at the top of the list: the host festival’s website; as well as coverage of the January announcement in the Ottawa Citizen, The Globe & Mail, and National Post.

A bit further down, however, was an article posted in April to the CTV News website entitled “Shakespeare’s Globe theatre to take ‘Hamlet’ to every nation on Earth”. Surely, I thought, this must make mention of the St. Lawrence Shakespeare Festival’s unique undertaking as the first Canadian host of The Globe theatre and the only stop in Canada for the world tour. After all, CTV is a Canadian national news outlet, they ought to cover news about Canada.

Alas, this was not the case.

CTV ran yet another article on The Globe’s international tour again in July. This article, by the same author, also failed to make mention of the single Canadian stop on this impressive tour.

How “Canadian” is it if the coverage makes no mention of the single stop in Canada?

Other Canadian papers picked up the article by the same author without ever questioning the obvious local connection.

Just days after the sole Canadian stop, both Canada.com and CTV managed to cover the next venue on the tour – the UN headquarters in New York City. In mentioning 21 other spots on the world map, the article still fails to note Canada’s participation.

Granted both of the articles on the tour favoured by CTV and others originated with the Associated Press – “the world’s oldest and largest newsgathering organization”. A big news machine such as that surely cannot mention all 205 spots – even if one of the authors is herself Canadian.

Yet the question begs, in a digital era with tools such as Google, aggregated user generated content on networks such as Twitter and good old fashioned email, how is it that CTV failed to take note of the Canadian connection – especially considering that the tour was considered newsworthy enough to be covered not once, but three times to date?

It was also not from want of direct outreach – CTV was contacted directly through four different email accounts, including to general newsrooms and direct contacts. Had reporters or editors done a quick Google search for the terms “Hamlet, Globe, Canada” they would have easily found past coverage announcing the Canadian host, dates and location. And with journalists such as Paul Wells tweeting about their attendance to some 30K followers, it seems odd that CTV didn’t pick this up in a basic social media scan of Canadian news.

The digital environment makes it much easier than ever before to track news as it happens online.

While verifying breaking news shared via user-generated content can be tricky, easily verifiable news such as The Globe tour stop in Canada is but a quick Google search away. Any newsroom worth their coverage ought to by now have a system in place for monitoring local content across open source channels and processes in place for identifying that which should be pursued and steps for so doing. (And if you don’t, there are Canadians who can help!) That an AP article boasting a show in “every nation on Earth” did not trigger some sort of alert in CTV news monitoring to at least investigate a Canadian angle to this story might lead some to question the modernity of their methods and earnestness at providing Canadian coverage.

Something is rotten in the state of this Canadian newsroom.