With the release of its 2016 World Press Freedom Index, Reporters Without Borders proclaimed “we are entering a new era of propaganda”. Indeed, Information is increasingly being manipulated and controlled in attempts to sway unsuspecting target audiences. This can have serious implications for society at large. The average person now spends eight hours a day consuming media, often on multiple devices at once – essentially plugging into a media matrix that, given the amount of exposure and degree to which that information environment is manipulated, drastically shapes perspectives and real-world outcomes. This real outcome has been recently demonstrated through the ability of Daesh to successfully engage with international audiences luring the radicalised to help build its so-called caliphate. Leaders aiming to counter the destabilising effects of adversarial propaganda – be it from extremists or external actors seeking to undermine authority – must gain an understanding of the new information operating environment and then be prepared to not just shape opinions, but follow up with practical measures that address core issues making that society vulnerable in the first place.

In this context, the first critical step in designing a successful influence operations strategy is Digital Media Mapping, a window into society that enables professionals to develop strategies for audience engagement and capacity building in digital communications literacy, which can in turn counter the effects of adversarial propaganda.

What is Digital Media mapping?

Digital Media Mapping (DMM) is the monitoring and analysis of interactions between people to essentially understand how people are communicating online. The analysis identifies who is engaging online and what topics they are discussing, but also how these subjects are being discussed, or the sentiment around it. DMM helps frame online engagement by determining where people are connecting be it by geo-location (when data is available) or by the online spaces where interactions occur (such as forums, social networks or media comment sections). Most importantly, however, DMM can help explain why these interactions are important, identifying networks and key influencers.

Put The Information Environment into Context

During the next stage, DMM analysis must be framed within the offline context of an operating environment. People might be communicating online, but so what? If only 15 per cent of a population in a country can afford to connect to the internet, those people engaging online might be of a very specific socio-economic class – and not at all representative of an overall society. This situational awareness has an impact on how intelligence gained through Digital Media Mapping is understood and framed.

To that end, a full analysis of the operating environment should include review of:

Apart from better framing and understanding of DMM results, the key insights gained through greater situational awareness would help in defining necessary parameters for conducting the overall analysis of unstructured data more manageable. 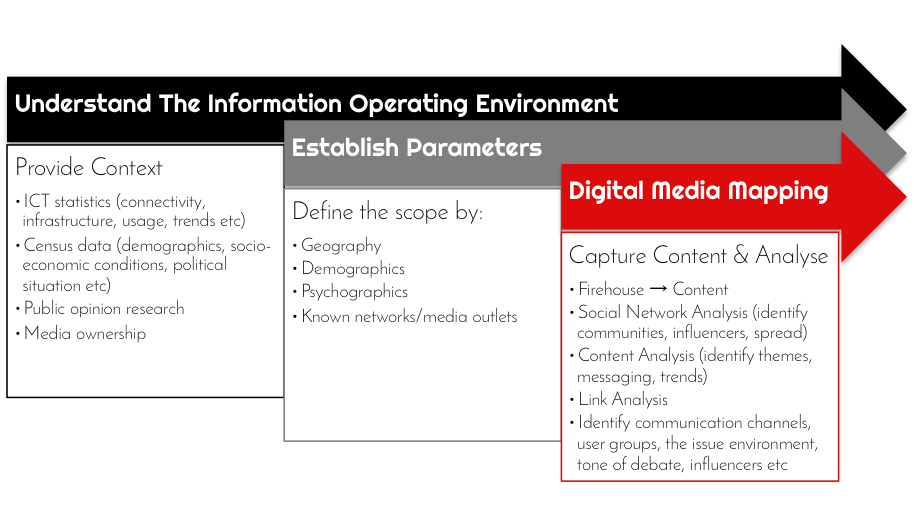 Every two days more new information is generated than was created cumulatively before 2003. This is an unfathomable amount of data – and making matters worse, most of this information is unstructured, rendering it very difficult to analyse. Having clear research questions with specific parameters helps in creating manageable snapshots of this data, that can then be analysed – and the findings extrapolated.

Research conducted to place DMM into an operational offline context can help identify reasonable parameters such as geography (both online and off), demographics, psychographics, or known communities and networks, that can be set for the capture of online data related to these definitions. This step is extremely important as it ensures that only data necessary for understanding these subsets of online activity will be retrieved through digital research service providers such as BrightPlanet, Datasift, or GNIP.

In making sense of this defined, but still unstructured data further analysis is required, including:

Ultimately, the above Digital Media Mapping will assist in understanding:

Such in-depth mapping can provide ample data stemming from the country-specific cultural, sociological, economic and political domains, and inform the development of a facts-based communications strategy that can hyper-target influencers, engaging them to help build an amplification network of supportive voices – but also to create strategies for countering opponents.

In creating effective Influence Operations, both quantitative and qualitative data should drive the development of counter/propaganda strategies. This understanding of the information environment should be coupled with other available academic studies that consider cognitive biases and other human behaviours vis-à-vis influence and media consumption. Efforts should look beyond singular, one-time campaigns, to a more systemic and all encompassing approach. Propaganda by nature is continuous – and so too must be any effective counter measures. While each communications strategy will be different depending on the needs of that specific environment, there are several considerations each comprehensive strategy ought to include:

There is no such thing as one large monolithic audience. If you attempt to speak to everyone in the world at once, you will end up reaching no one. Much of the success in Russian or Daesh propaganda can be found in their ability to identify very specific target audiences, and craft messaging that resonates with them. While care must be taken to avoid saying different “truths” to various audiences – because of the ease with which one audience can see the content shared with another – messaging must reflect the existing beliefs of a group if it is to resonate. 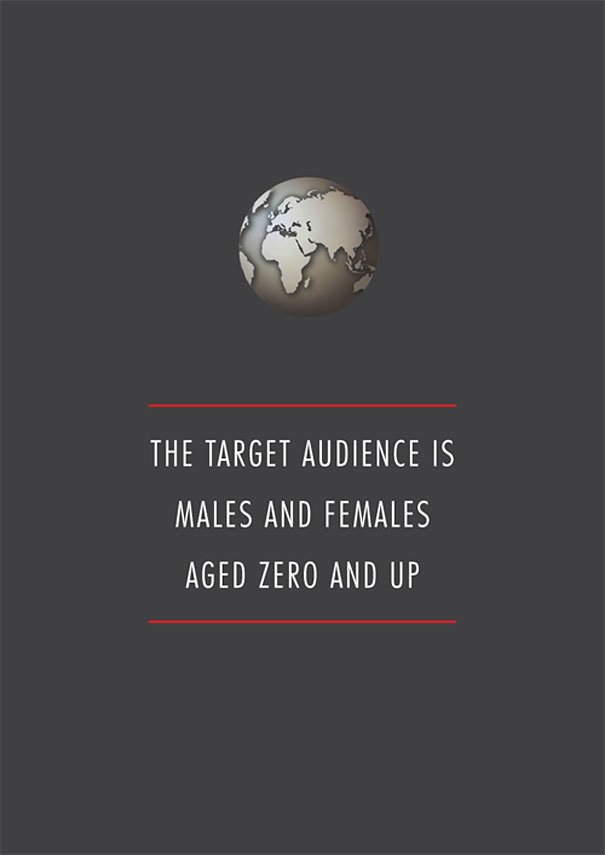 A poster by Clients From Hell, visualizing less than helpful requests to graphic designers

Contextualised Digital Media Mapping will provide insight into which communities are engaging online and how, and more importantly what matters to those groups. For maximum engagement, focus on target audiences that are likely to become communications partners, sharing in similar values and likely to pick up on key messaging. Any emphasis spent on dissenters should involve identifying influencers and understanding how that audience has come to believe what it does.

In order to sway an audience, any counter messaging must conform to that target group’s existing beliefs. If new information contradicts what a group already believes – even if a superior argument is presented – it is unlikely to be accepted. Likewise, counter propaganda that denigrates or insults the target audience will actually have the adverse effect, causing people to more fervently believe in what they did before. And, if the audience does not like the messenger, they will not accept the message.  In short, it is far easier to reaffirm existing beliefs, than it is to change perspectives, and much comes down to the messenger as well as the message.  Understanding and applying human psychology when crafting messaging is equally as important as Digital Media Mapping and initial offline research.

Given cognitive biases, it is highly unlikely that dissenters will be easily swayed by a communications strategy. Attempting to counter disinformation with so-called “myth-busters” will do little to change the minds of those who already accept propaganda as truth. Setting aside the mathematical challenges of disproving disinformation with proof otherwise (it takes far less time to create and spread lies than it does to prove them wrong), fighting lies with facts actually does little to change perspectives. Moreover, those people exposed to disinformation are seldom those who view the corrective information when it comes out. Instead, focus on identifying the key influencers who are spreading dissenting messages. Analyse influencer content to determine key messages and what is appealing or manipulative about them. Track the spread of influencer content understanding how content moves and why that might sway target audiences. Review what the audience is saying about the influencer content, much about the conditions for that propaganda’s success can be learned in their reactions. This knowledge can help in creating strategies for reaching people before they are so disaffected as to join organisations such as Daesh. Reaching those who have already been radicalized requires far more creative strategies than broadcasting criticism or “facts”.

Developing Capacity Amongst The Target Audience

Digital insights can empower citizen journalists, independent media and civil society to amplify their messaging to inform the public and better hold the government to account – however, capacity must also be built among these networks such that they stand a chance of countering coordinated propaganda. Comprehensive training on communicating in a Digital Age and coping with disinformation must be offered. Venues and opportunities for collaboration must be established and fostered to develop a network that can share information, and increase the volume of counter-propaganda efforts. It is not enough that these beneficiaries be enabled to share a message. they must know how to make it heard, spread farther, and feed back into a network with shared aims and goals. Careful crafting of alternative messaging must take into account the socio-political and psychological realities of key target audiences, and the country as a whole.

With so much content being created each day (for a dizzying visualisation by channel, click here), the biggest challenge in countering propaganda is cutting through the noise. Building capacity among supporters is key, but in order for their voices to really be heard, amplification of their messaging is required. This entails fostering networks and channels of support – both among regular users (because people will believe what others like them already do) and existing gatekeepers, such as media outlets and journalists. The spreading of counter-propaganda cannot be left to the chance of virality, but supported through deliberate sharing channels that spread content, comment positively about it, and “like” it. 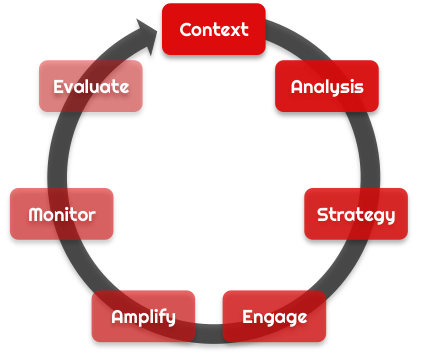 While much of the background research and Digital Media Mapping requires manual specialist support, these steps feed into a more automated Media Monitoring capability. Based on the findings of the initial stages of research and analysis, platforms such as Bottlenose, Cision, Crimson Hexagon and other custom solutions can be set up to facilitate real-time monitoring of online conversations. Such ongoing monitoring is crucial in tracking the effectiveness of outreach efforts over time, whereas the findings from contextualized Digital Media Mapping provides much needed baselines and parameters for continued listening

Constant media monitoring and evaluation must become the basis for a feedback loop. Based on regular review, counter-propaganda strategies must be tweaked to increased effectiveness.

In this article, we reviewed some of the fundamental steps and practices which should be considered and implemented to achieve a successful Influence Operations campaign over time.

In the new digital reality, media, information, and technology are converging in ways that both significantly impact behaviour and perspective, but are also very hard to observe.  As a result, fully grasping the related consequences is an ongoing challenge. A new multidisciplinary approach is required to analyze how this new information environment is shaping human perspective and how it is shaped in return. And, at each step of the process, practitioners must develop an appreciation for how quickly the information put out there can be turned against the source. In the Digital Age, to win in an information war, one must begin to think differently. More importantly, yet, is to match influence operations with real-world measures – swaying minds is not sufficient if the messaging does not correspond to the physical circumstances around the target audience.