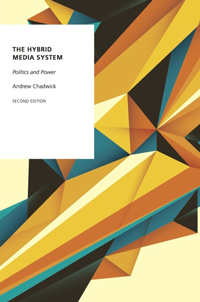 New communication technologies have reshaped media and politics. But who are the new power players? The Hybrid Media System is a sweeping new theory of how political communication now works. Politics is increasingly defined by organizations, groups, and individuals who are best able to blend older and newer media logics, in what Chadwick terms a hybrid system. From American presidential campaigns to WikiLeaks, from live prime ministerial debates to hotly contested political scandals, from the daily practices of journalists and campaign workers to the struggles of new activist organizations, the clash of media logics causes chaos and disintegration but also surprising new patterns of order and integration. The updated second edition features a new preface and an extensive new chapter applying the conceptual framework to the extraordinary 2016 U.S. presidential campaign, the rise of Donald Trump, and the anti-Trump resistance protests.

Andrew Chadwick’s book, The Hybrid Media System: Politics and Power, offers a much-needed understanding on how media has changed since the advent of the internet. What makes this book so important is its grounding in what came before the internet, to offer a more balanced understanding of where we are now in communications and how we got there.

As the Bible says, “there is nothing new under the sun” – yet that hasn’t stopped the hype that some propagate suggesting that the internet has drastically changed media. In that regard, Chadwick provides a hybrid media model that helps bridge the gap between old and changing media logics.

While it is likely my bias in terms of research interests, I most enjoyed Chadwick’s chapter on the Obama campaign. The insights into how the campaign was coordinated, in terms of communications as well as community organization, were well-worth the read alone. A new edition has since been released (the details for it are above) and now include a new chapter on Donald Trump’s campaign.

This book is a must read for anyone interested in or researching digital media, including social media, if for no other reason than to check the tendency to proclaim that the internet has somehow fundamentally changed everything – we still do many of the things we did before the internet, just differently.

The Hybrid Media System: Politics and Power book is available at Amazon.