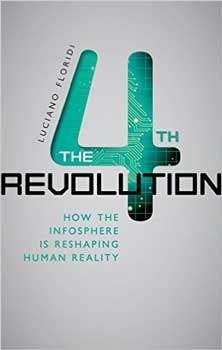 Who are we, and how do we relate to each other? Luciano Floridi, one of the leading figures in contemporary philosophy, argues that the explosive developments in Information and Communication Technologies (ICTs) is changing the answer to these fundamental human questions.

As the boundaries between life online and offline break down, and we become seamlessly connected to each other and surrounded by smart, responsive objects, we are all becoming integrated into an "infosphere". Personas we adopt in social media, for example, feed into our 'real' lives so that we begin to live, as Floridi puts in, "onlife". Following those led by Copernicus, Darwin, and Freud, this metaphysical shift represents nothing less than a fourth revolution.

"Onlife" defines more and more of our daily activity - the way we shop, work, learn, care for our health, entertain ourselves, conduct our relationships; the way we interact with the worlds of law, finance, and politics; even the way we conduct war. In every department of life, ICTs have become environmental forces which are creating and transforming our realities. How can we ensure that we shall reap their benefits? What are the implicit risks? Are our technologies going to enable and empower us, or constrain us? Floridi argues that we must expand our ecological and ethical approach to cover both natural and man-made realities, putting the 'e' in an environmentalism that can deal successfully with the new challenges posed by our digital technologies and information society.

What Dr. Luciano Floridi puts forward in The Fourth Revolution: How the infosphere is reshaping human reality is at once timely and exciting.

After working in the digital space for more than a decade, including training journalists on how information spreads and is manipulated, I have been constantly surprised at how weak our understanding is of the changes brought by the internet and related technologies. We simply have not caught our thinking up to our current reality. The digital space – or the “infosphere” as Floridi is describing it – is rapidly becoming far more integral to our daily lives than something we log on and off of at will. As Floridi explains, we are living “onlife”. In other words, what happens online doesn’t just stay online, it is interwoven into our daily experience, and we will become increasingly dependent on information communication technologies (ICTs) as we move into a new era of, what Floridi has outlined as, “hyperhistory”. Our understanding of our current information space must adapt to this changing circumstance – and Floridi’s The Fourth Revolution is a giant leap forward in helping us update our thinking.

Beyond demonstrating a more systemic understanding for the Digital Age than most grappling with this topic, Floridi does a commendable job of explaining new concepts such as “hyperhistory”, “infosphere” and “onlife” in extremely accessible terms. Far from the usually dry writing of academia, The Fourth Revolution is fun to read and full of an array of metaphors and examples drawing from the classics to pop culture and everything in between. Floridi has written a truly accessible book that anyone can and should read. Indeed, The Fourth Revolution ought to be compulsory reading for any introduction to digital literacy.

While The Fourth Revolution covers the changing nature of many topics, such as privacy, politics, education and the environment, a couple of things stood out to me as a communications professional.

Floridi warns that in the proxy culture developing in our burgeoning infosphere, “we may easily be de-individualised and treated as a type”. As a marketer, this particularly struck a nerve, because that is exactly what is happening as audiences are broken down into segments based on demographics and psychographics. Moreover, the so-called digital shadow each of us builds might be restricting our options for future growth or mobility out of a particular type, as “increasing memories also means decreasing the degree of freedom we might enjoy in redefining ourselves.” This already appears to be the case in American politics, for example.

American voters could easily be grouped by party lines during the recent presidential election, namely republican or democrat. Amplified through communications with like-minded people in social networks, existing perspectives were reinforced and further entrenched – whether they were accurate or not. Both echo chambers and growing animosity developed along party lines, and a lack of overlapping media that is trusted by both camps further decreased the chances of exposure to new, or different information. The limited information exposure inside such “echo chambers” often prevents individuals from accepting new information. Moreover, belonging to a perceived group encourages subscribers to conform with shared ideas and remain consistent in holding those views, making them more susceptible to populism and manipulation by a variety of techniques including memes, fake news, email leaks, trolling, and distorting online dialogue with astroturfing and bots. This can, and will, have disastrous implications for liberal democracy, which is based on consensus building. An easily manipulated electorate, irreconcilably divided by issues, will not likely be able to show empathy or compassion for the “other side”.

Another point that really stood out was the idea that “the ever-increasing pervasiveness of  ICTs shakes established reference frameworks”. (This concept is dealt with more in depth in Floridi’s The Onlife Manifesto and its longer collection of essays related to the concept, both excellent companion readers for The Fourth Revolution.) According to Floridi, these reference frameworks are shaken through these four transformations:

Again, in light of the recent U.S. elections, it would appear these transformations are already taking place, at least in politics. With Trump’s continuous posting to Twitter – not to mention the issues around fake or biased news – there was a blurring between reality and virtuality. The use of bots to spread news, pump hashtags and dominate online political discourse blurred the distinction between human and machine. An abundance of information enabled people to choose what to consume based on preexisting beliefs, and thus strengthening echo chambers. And considering 62% of American adults get news via social media and more than a few voices were decrying Facebook’s role in Trump winning the election, interactions do appear to be taking primacy over entities.

How our proxy culture sorts us into types and the four transformations experienced in a shift to a hyperhistorical era are but two of the many points addressed by Floridi in The Fourth Revolution. While the book is short and a quick read, it will leave you with ample thought.

The Fourth Revolution is available on Amazon.