The Age of (Self) Manipulation

We live in an age of persuasion. As media outlets, brands, and others compete for our attention in an increasingly crowded information environment, manipulative communication techniques permeate much of the content we consume. Tailored to our sense of self and desires to feel, this content encourages us to engage with it, sharing it through our networks – and as we do so, makes us a willing participant in our own manipulation.

How are you complicit?

Unless you are the rare communications Luddite who shuns social networks or hides from all forms of marketing or media, chances are you have reacted to messaging at some point in your life. A reaction could include voting for a candidate in an election, buying a product, or simply clicking on a link to watch a video or read a post – and let’s face it, you probably clicked on a link to find this article.

We are persuaded daily: by seemingly benign linkbait goading us with its “you won’t believe what happened next!”; by celebrities selling products; or worse, by the catastrophic use of conflict and fear to muster popular support for war. The manipulation is usually subtle, so much so that if we are not watching for it, we readily react as prodded. What’s more, this persuasion often satisfies something on a personal level, encouraging us to participate in our own manipulation, even if we recognize the more blatant signs.

It’s all about me.

A study by The New York Times Customer Insight Group [1. Customer Insight Group. (2011). The Psychology of Sharing: Why do People Share Online?. The New York Times.] surveyed people to understand their motivations for sharing information online. Most people (93%) suggested they think carefully about how useful information is before sharing it. This consideration is in large part due to the fact that when people share online, it is more about themselves than it is about their recipients. According to the study:

We share online because of our own sense of self. We share to advance our own interests, to stay connected, reaffirm our own beliefs by engaging with like-minded people, to see ourselves as part of the world and, in turn, let the world know who we are. In short, our egos drive us to share information online – communications professionals know this and use it to their advantage. Few media outlets understand the power of self better than Buzzfeed, which has built an empire on content that spreads – or in other words, content that speaks to our egos.

In another study by Buzzsumo spanning an 8-month period and analysing the share rates of over 100 million articles, it was found that 8 out of the top 10 most shared articles were personality quizzes – 7 of which were published by Buzzfeed. The most shared quiz asked readers “what career should you actually have?” and was shared more than 5 million times. 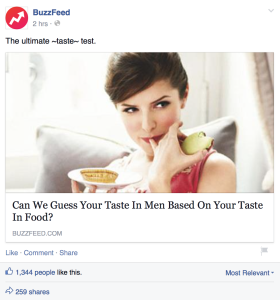 Personality tests (and their results) feed several top drivers for online sharing including providing content for staying connected and seemingly enabling people to give others “a better sense of who they are”.

These formulaic personality quizzes continue to be a scourge in social media streams – surely followed by puzzles that provide people an opportunity to demonstrate how smart they are (or sometimes not), such as counting the squares or naming a city that has no letter A in it.

Each time we click a link for a personality test (or answer some puzzle), we become complicit in propagating someone else’s content without fully understanding how we are being used. We become a vehicle for promoting a website and its content by sharing our results or answering the game. We do have a choice – should we be willing to put our egos aside for a second – it is possible to take the quiz without sharing the results, or answer the puzzle for ourselves without posting it.

More than a feeling

Beyond appealing to our desires to look good or seem interesting, content is also shaped to encourage us to feel.

A study of the New York Times most shared articles indicates that content evoking arousing emotions are more likely to spread. As the authors of the report explain:

Content that causes people to feel a “heightened arousal or activation” tends to be shared more than articles that do not. Emotions, states and experiences such as curiosity, awe, anger, inspiration and joy all encourage us to share – a phenomenon more fully explained in Jonah Berger’s book Contagious: Why Things Catch On. In addition to these emotions, a sense of self-importance through being part of something perceived as exclusive is also a driver in spreading information. 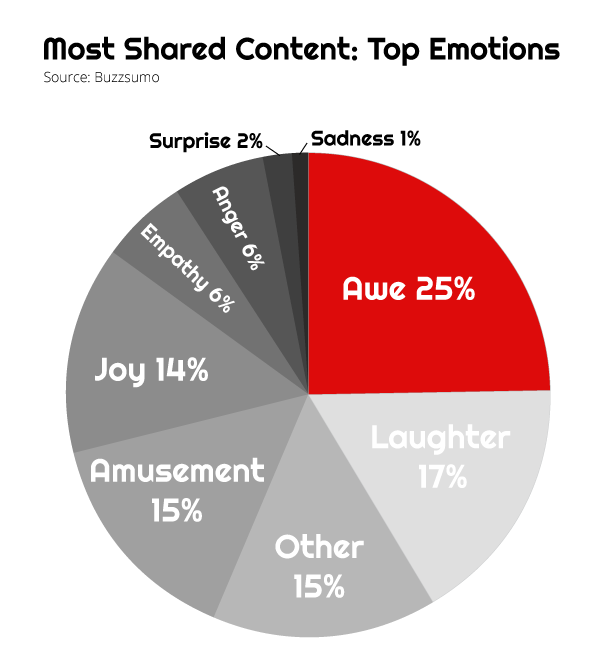 These emotions and states are manipulated to encourage engagement with content.

Curiosity has long been a driver for linkbait, luring us with promises of things we won’t believe or asking questions that can only be answered by clicking on that link. The technique works. One Buzzfeed video purporting to offer “14 Sex Facts You Won’t Believe Are True”, has been viewed more than 14.5 million times.

The use of emotions and states to grow readership and foster engagement is no longer just the tool of web-savvy infotainment sites. Traditional media is increasingly adopting these techniques as they struggle to maintain audiences in a Digital Age. Headlines are becoming more sensational – as the content within them also delves deeper into first-person accounts and slants towards editorial.

A quick look at The Guardian’s most viewed articles in 2014 is revealing. Topping the list with nearly 4 million views was the article that introduced Edward Snowden to the world – a piece that mixed exclusivity, curiosity and awe in one much-read piece. Of the other top 100 headlines, 38% used curiosity (frequently asking a question), 30% involved awe, and 21% engaged fear. It is an approach that seems to be paying off, with some studies indicating that The Guardian is the most shared British news site on Twitter. 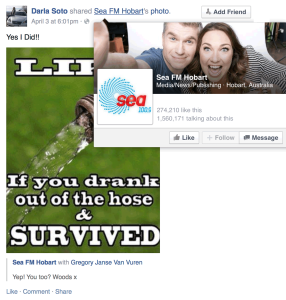 Websites such as Viralnova and Upworthy post endless content intended to tug at heartstrings – and encourage sharing. When we allow our emotions to be played such that we too share this content, we turn from mere targets for manipulation by original content generators into unwitting propagators of that content through our social networks. This magnifies the spread of content and makes it more powerful through increased social acceptance.

While it is impossible to stop feeling altogether, we can exert a bit more control over how we react when an arousing emotion occurs. Before clicking the Like or Share button, try looking at who is promoting this content – is it the person who originally posted that entertaining content, or is it a radio station after Likes and Shares? Who really benefits from you engaging with this content? Despite how that content makes you feel, do you really want to promote the site encouraging you to share? Perhaps most importantly, how does this content affect you such that you want to share it?

The Good, The Bad and the Selfie 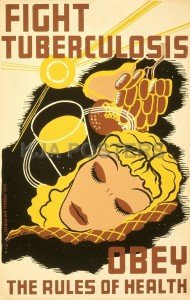 All of this is not to pass judgement on whether persuasive communications techniques are good or bad. Manipulating people into engagement or some kind of an action is nothing new – posters once encouraged people to practice good hygiene to fight disease. Messaging that encourages you to click or share is just the digital equivalent. In some cases, plucking at heartstrings and appealing to egos has led to considerable positive change. Take the ALS Ice Bucket Challenge, for example.

In the summer of 2014, the interactive fundraising campaign swept the online world raising $88.5 million for a disease so rare it affects less than 1% of the total population. While this disease is horrific, given its lack of prevalence in society is often ignored from a research or funding perspective.

The fundraising campaign brilliantly appealed on an emotional level, causing people to feel hope and inspiration, but also to want to engage on a self-interested level, as the challenge was essentially a video-selfie doing something silly. Once celebrities jumped on board, this campaign was an engagement trifecta of feeling, ego and influence – little makes content spread online faster.

The campaign effectively cut through the noise to raise considerable awareness for an otherwise forgotten condition. Yes, it was persuasive in appealing to egos and making people feel, but it also depended on audience complicity – when a person answered the challenge they were ultimately complicit in their own manipulation, but at least it was for a good cause.

And so what, you might ask? By engaging with this content you are putting an image of yourself out to the world that makes you feel good. After all, you’re just trying to connect in this crazy digital world. And what’s the big deal if you enjoy the sensation of arousing feelings? The consequences might not seem obvious, but they are myriad. Below are a few:

The internet is changing our information environment. We are no longer fed information and expected to simply accept content as it happened with TV or newspapers – we are now asked and encouraged to engage with it, persuaded to do so using techniques that appeal to our weaknesses, personality traits, hopes and aspirations. To that end persuasion is becoming a two-way affair, we are moving beyond being convinced and into active participation. In a way, we join the ranks of a massive propaganda machinery that includes millions of content generators and manipulators who in their daily online engagement receive, create, edit or distribute messages shaping all of our perceptions of reality. This onslaught of persuasive communications will not abate. Since information shapes our minds and perceptions, which in turn shape our actions, the future hangs on the tips of our fingers clicking away at a keyboard or mouse. It is down to the individual to become more aware of what sort of information they encounter and how they interact with it, in The Age of (Self) Manipulation.