The internet has changed many things including the concept and practice of “cult of personality.” Formerly a one-sided, top-down affair affecting mostly those living under the rule of the promoted personality, the internet has facilitated the spread of such popularity beyond geographic borders by allowing grassroots engagement in a massive, bottom-up fashion. Whether this engagement is real or fabricated through the use of fake accounts, the perceived participation, sharing with friends and growing Likes lend credibility to the personality cult.

A product of propaganda, a cult of personality is created through the encouragement of a target audience to show admiration to a specific person, in some cases leading to mass hysteria. Achieved through mass media, personality cults portray the key subject as ideal and heroic in a bid to foster devotion and popular sentiment. The cult of personality in politics is similar to standard PR and reputation management, but executed on a much more massive and systematic scale over time, usually by a state with considerable sustained funding. 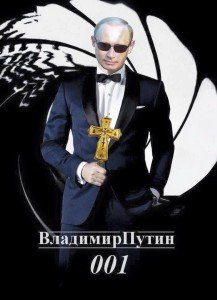 Cults of personality have traditionally been limited in geographic reach. Through print, radio and television, leaders have been able to foster personality cults within their countries, but such devotion and popularity rarely extended beyond the region ruled. Through the internet – and specifically social networking tools such as Facebook – however, personality cults can enjoy far greater reach

Consider how a network of unofficial Putin fan pages work to promote the leader’s personal image. The 12 Facebook pages and groups found in the course of writing this article enjoy Likes and members totaling more than 2 million. While this might not be an astonishingly high figure by social media standards, these are Likes for unofficial pages seemingly unsanctioned or unsupported by Putin himself.

Half of these fan pages were created in 2013, with one dating back to 2007. These dates correspond to a surge in Putin’s popularity, suggesting that adoring fans could, in fact, have created them.

The fan pages and groups are predominately run in English, with the exception of those in Arabic, Russian, Italian, Polish, and Finnish.

Geographic reach for these pages extends as far afield as New Zealand, but location selection on Facebook is set by the user and cannot always be verified by GPS data. In analyzing the content and users of a specific page, one that more broadly promotes Russia, Putin and Pan-Slavic Orthodoxy, the page administrators appear to be Serbian (based on the content posted), but many of the users have self-identified their operating language as being American English, Bulgarian, German and British English, beyond Russian and Serbian. In the age of the Digital Cult of Personality, spreading the content beyond the national borders becomes much easier than ever before. Who stands behind it, where it comes from and what effect it has on target audiences is another matter. 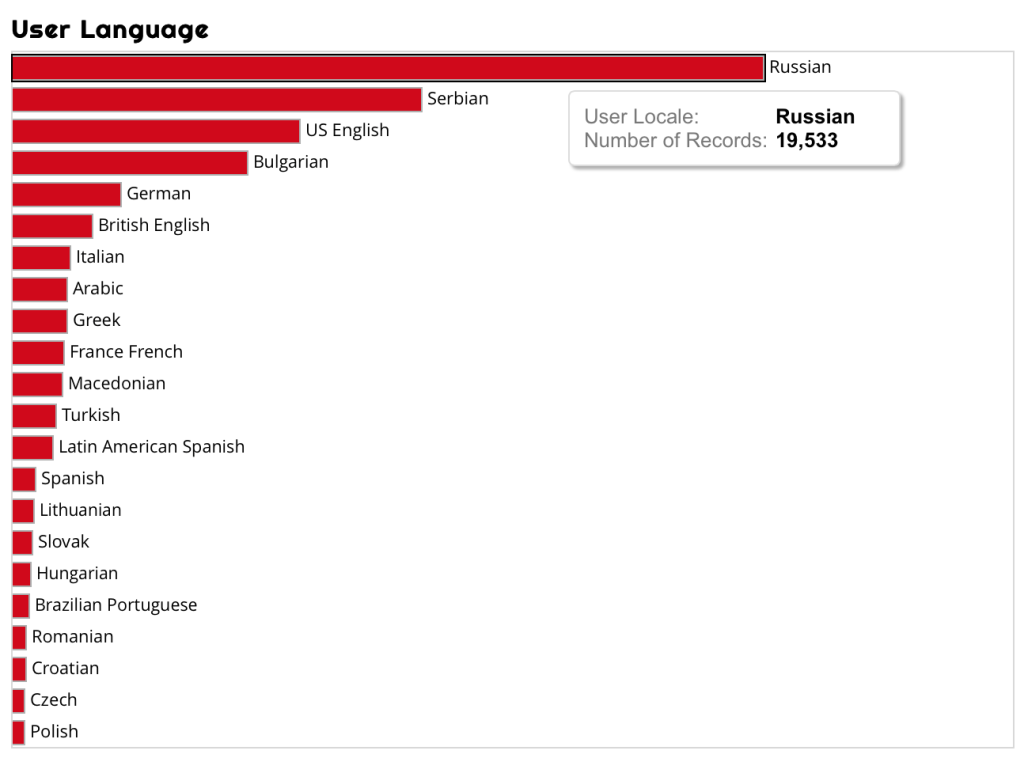 Reality is not all That Matters

As with many other things that adapt to the Internet Age, so does the creation of ‘cult of personality’. The new Digital Cult of Personality offers the appearance of citizen participation and grassroots adulation, a staging of another kind.

One of the characteristics of the Digital Age is the ability to create a virtual reality that may, or may not, correspond to true facts and realities on the ground. A masterful manipulation of Facebook Likes, an enthusiast’s innocent re-posting of false information and other methods can all be used to establish credibility in the minds of target audiences. After all, the more others around us believe something to be true, the more likely we are to accept that idea as fact too.

The distortion of reality in pursuit of a Digital Personality Cult could be achieved in three ways, for example:

User-generated content is beginning to influence perspectives and offline actions. Recent studies analysing the impact of online content and shopping habits confirms this view. A Forrester study from late 2014 indicates that herd mentality applies to user-generated content and purchasing: 76% of those surveyed were more likely to buy a product if many positive reviews were available online. It stands to reason that user-generated content supporting a political leader, for example, could have a similar impact on target audiences, as one Pew Research Centre study demonstrated in 2012.

Politics and ideology can be a motivating factor for a person deciding to disseminate information – whether it is verified or not. (I personally enjoy the example of one young woman’s response to sharing disinformation online regarding the recent conflict in Gaza, as shared in the video below. For her, the representation of bombing was justification enough for sharing something that was not true.)

Returning to the examples of Putin fan pages, the appearance of geographic reach could be enough to convince people that Putin’s popularity is broader. In analyzing the top 10 most engaged users of the Serbian-led page as mentioned above, half appeared to be legitimate accounts including an Azerbaijani in Germany, a Russian in Canada, a Serbian in an unidentified English speaking country, another Serbian in the Balkans, and a man in Poland. One other appeared to be a Serbian organization, rather than an actual person.

Four of these top contributors, however, appeared to be fake accounts posting only promotional content supporting Putin, in language that did not correspond to the claims of the identity. For example, the image below was taken of a post on one account claiming to be an English-speaking native woman, but the text is in Russian using Latin script. Further analysis of this user account also suggests it is more likely run by a Russian man, rather than a woman. The account identity has been obfuscated in the event that the account is (however implausible) legitimate. 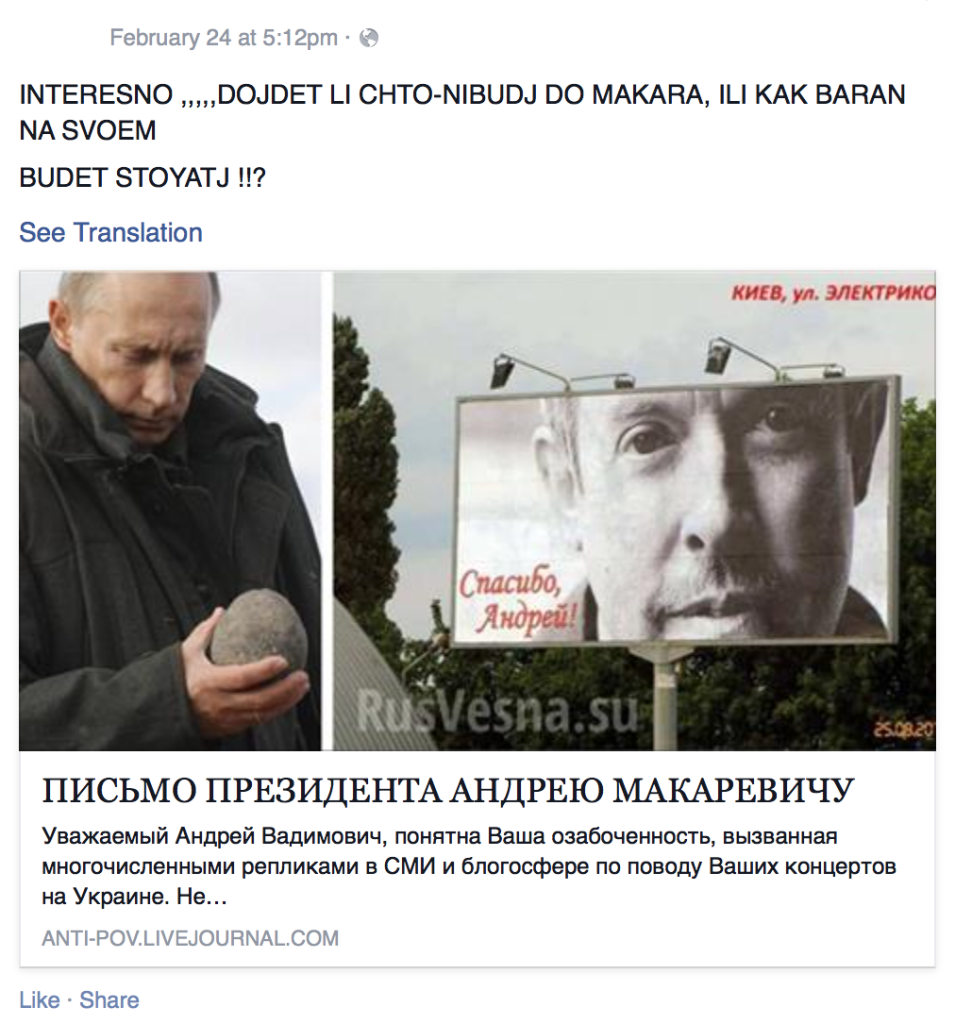 Of course, all of this uncertainty has not prevented people from liking these pages. Since beginning research on this article two weeks ago, and reviewing engagement rates again, many of the pages assessed have gained hundreds of new followers in that time frame. Considering none of the pages or groups appears to be paying for ads, this suggests a relatively healthy organic uptake in likes – (or at least one as a marketer, I would be pleased to enjoy on any of my pages).

The future is one of dis-reality. As disinformation is increasingly mixed with truthful content, the lines between both will continue to blur. And with increased exposure to this murky content, more average people will become desensitized to it and unable – perhaps even uninterested – in distinguishing fact from fiction. 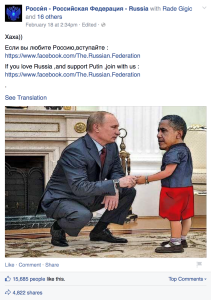 None of these pages appear to be official. Often the content seems to be unprofessional and simply driven by what might very well be fans of Putin. These pages are enjoying healthy engagement rates, as exemplified in the second most engaged with post from the Serbian-run page, pictured here to the right. (Note the likes, and shares. Additional examples are below.)

It is also entirely possible, however, that outfits such as Студия 13, (which runs a fan page on VKontakte and supplies the other Facebook pages with visual content), are sponsored by someone to create the endless imagery that feeds into this Digital Cult of Personality. This question warrants further investigation, to be sure. Arguably, whether they are sponsored or not, the illusion of grassroots support will still have an impact on regular users who encounter these pages – particularly if they are sympathetic to Putin and Russia already. 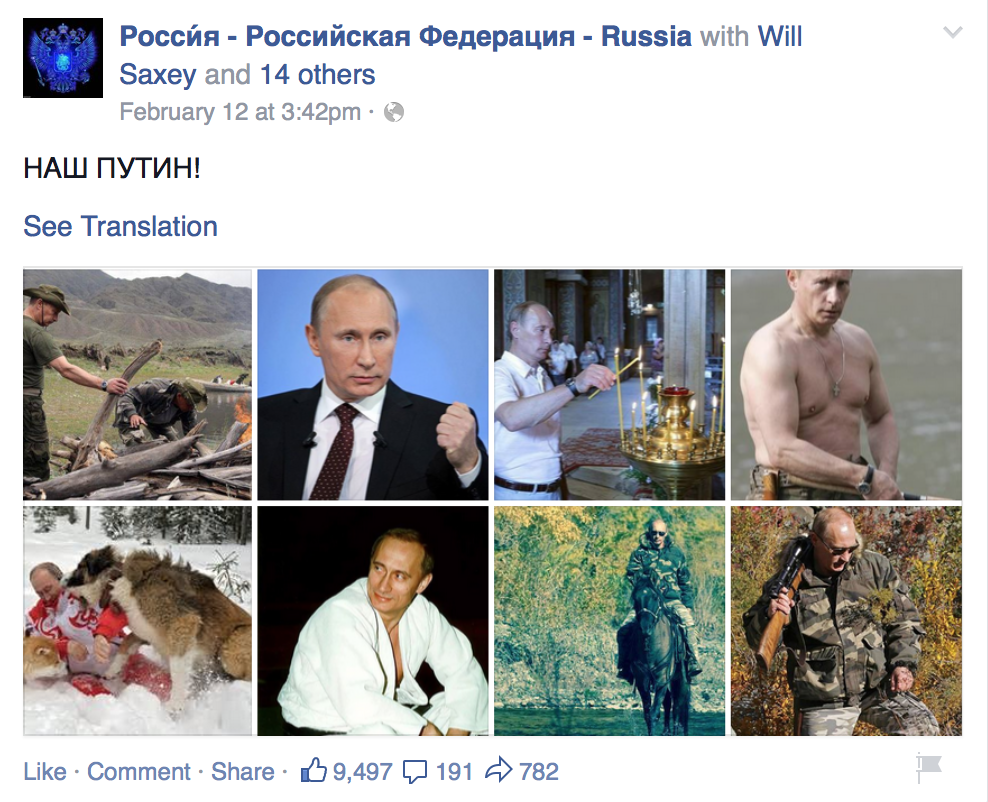 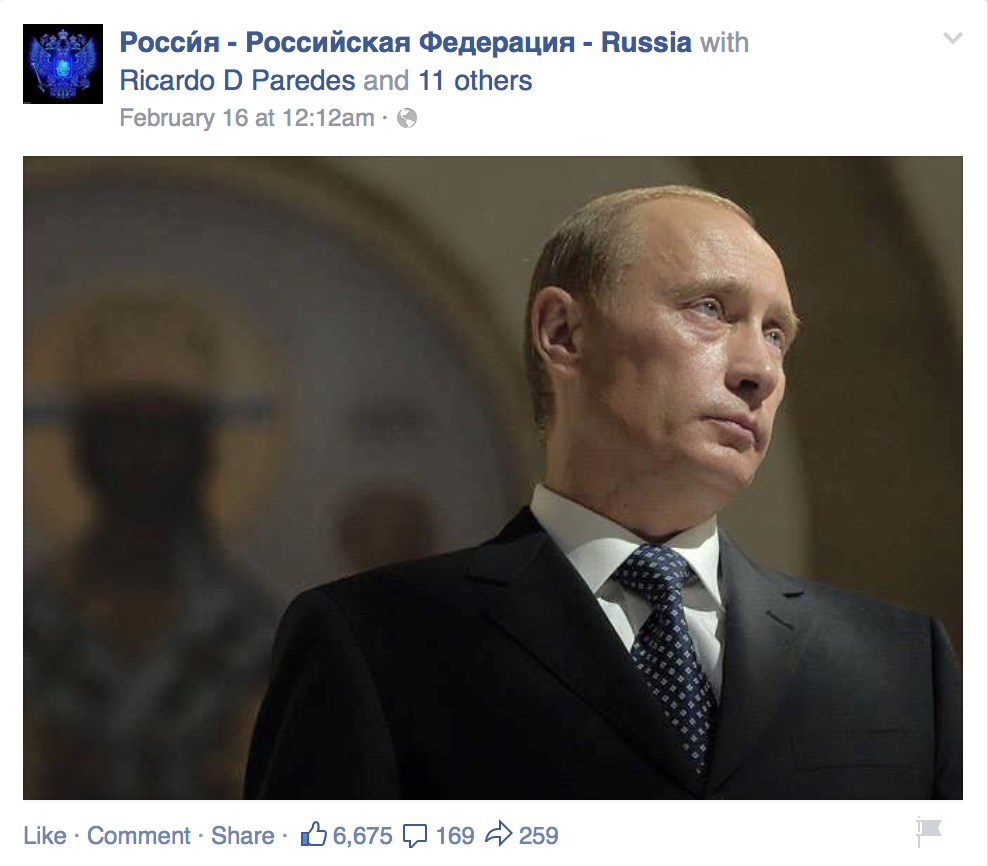 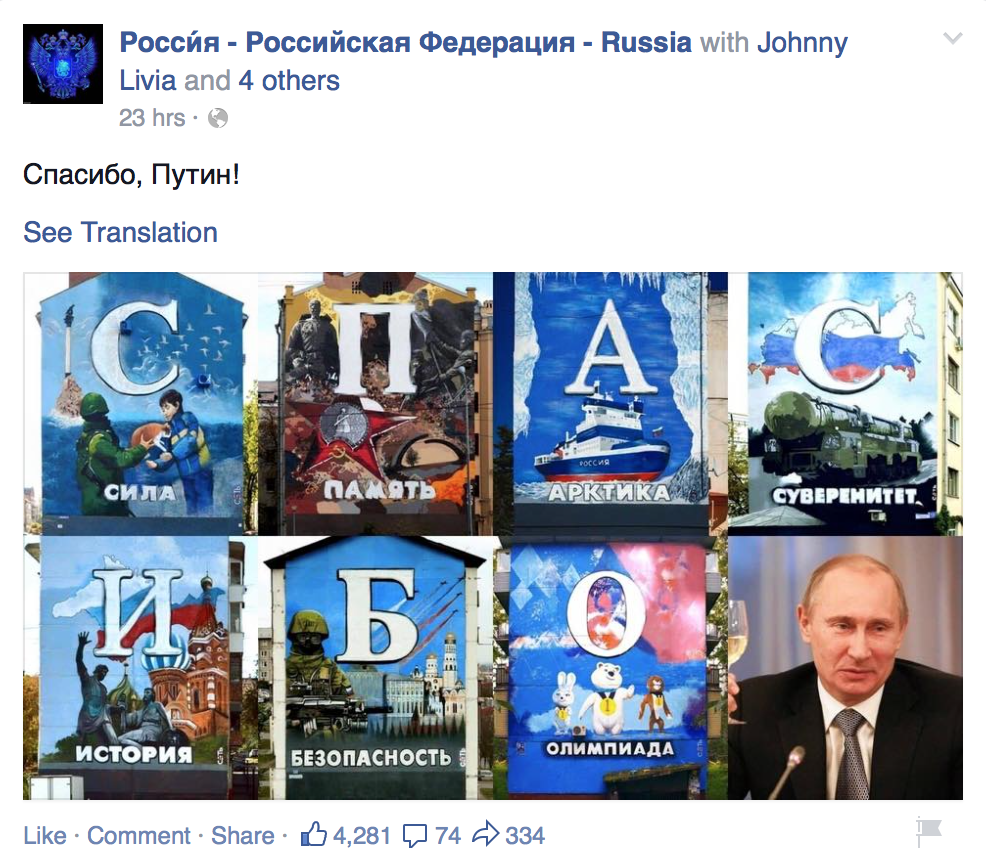 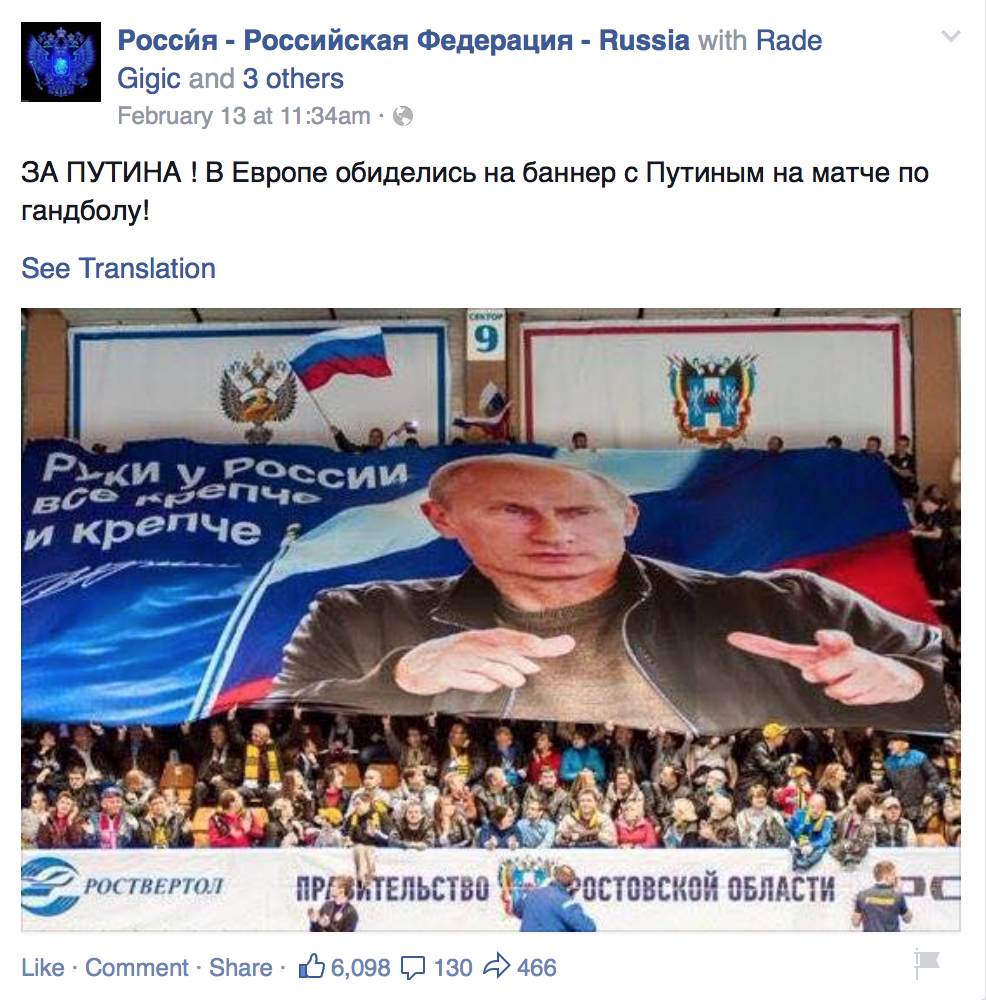 Whoever is behind supporting a Digital Personality Cult for Putin, if there is in fact an orchestrator, certainly knows the target audience. Content draws from themes designed to engage a pro-Russian audience, including victory in the Great Patriotic War (World War II), the tradition of a strong man as leader, Pan-Slavic Orthodoxy as a civilization juxtaposed against the West and morally superior, and even old Soviet propaganda, as highlighted in the post and poster below. 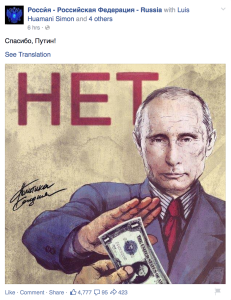 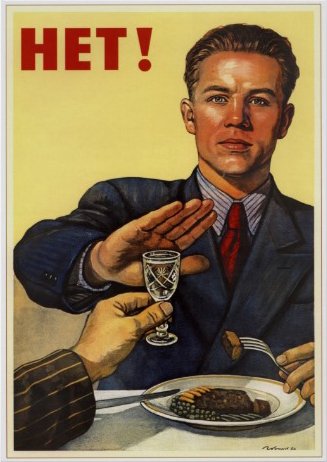 And in exploring how these Putin fan pages are connected and liking other pages, it is evident that these pages, at least, are paying close attention to the Russian Ministry of Foreign Affairs, RT, Dmitry Medvedev, and the Skolkovo Foundation – as demonstrated by this rather messy Gephi chart below. 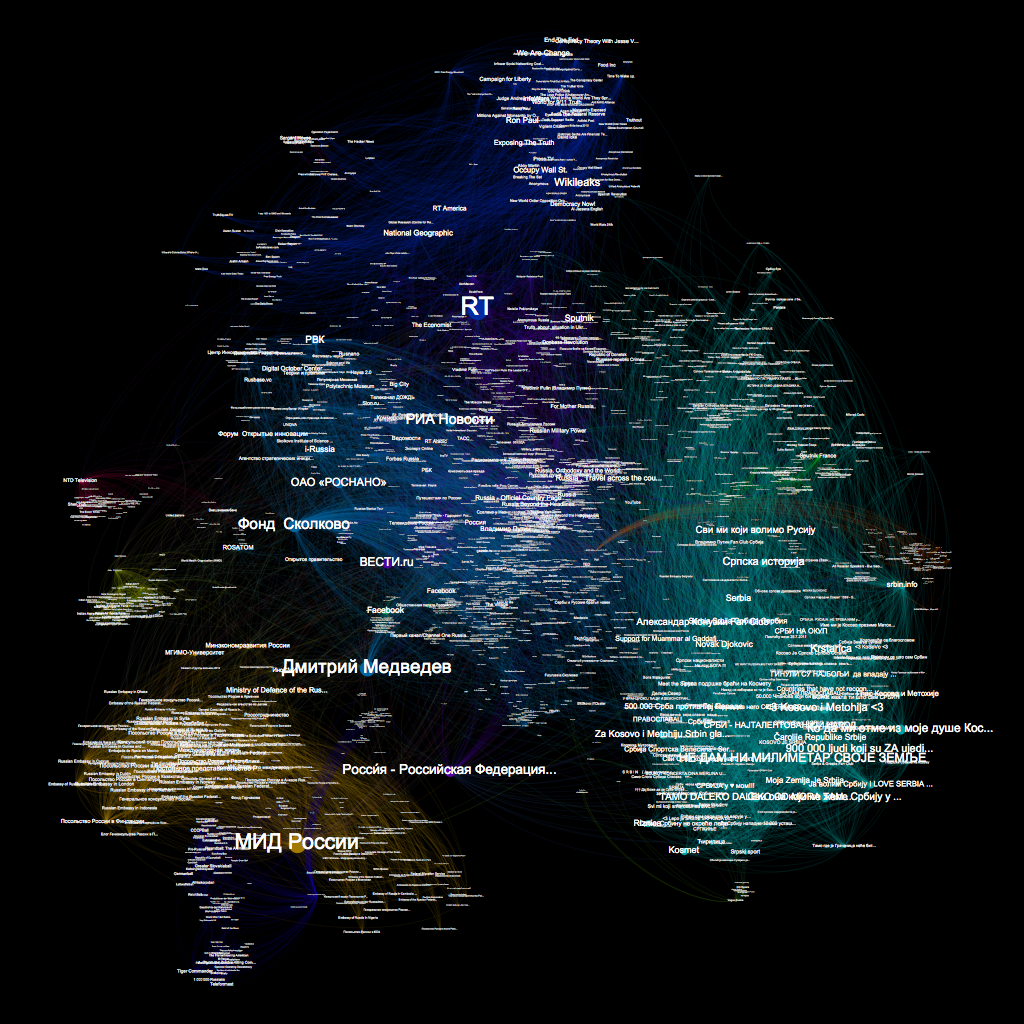 The possibility exists to adapt the concept of Personality Cults in a Digital Age, into something far more insidious and globally effective than what has been achieved in the past. These pages might just be the beginning of a “user-supported” propaganda approach.