Christmas can be an emotional time of year. From a propagandist’s perspective, that can present both opportunities and challenges, depending on the strategic needs, and whether or not a campaign’s aim is to build morale, or break it. Since influence activities at Christmas time extend beyond conflicts and include advertising (encouraging people to consume) and patriotic holiday greetings, below, dear readers, is a sampling of historic propaganda efforts at Christmas, as a holiday greeting to you.

First a little housekeeping. For those new to this site, our definition of propaganda draws from Jowett and O’Donnell, namely:

“propaganda is the deliberate, systematic attempt to shape perceptions, manipulate cognitions, and direct behavior to achieve a response that furthers the desired intent of the propagandist.”

As such, propaganda goes beyond disinformation or mere posters, and encompasses all deliberately persuasive communications. Propaganda itself is agnostic – it can be used for good and bad. The key to effective propaganda is in using messaging that appeals to the emotional state of the target audience. Reflecting the emotion currently felt by the target audience, for example, has a higher likelihood of succeeding in persuading them.

Christmas is nothing if not an emotional time. Expectations to be with and enjoy one’s family run high. This can lead to feelings of nostalgia, and longing, particularly if people are not able to be with their family.

This longing was used to positive effective in a campaign to demobilize Colombian guerrillas, for example. “Operation Christmas” manipulated the sadness felt by many Colombian guerrillas during the holiday season, and spread a message to encourage demobilization. The campaign resulted in a 30 per cent increase in demobilization over the year before, directly correlated to the initiative. The effectiveness of this campaign wasn’t just a matter of making the target audience feel, but provoking the audience’s current emotional state for the desired outcome.

Emotions have long been used to erode the morale of adversary, particularly at Christmas. Sadness was used by the Germans in leaflet drops during the Second World War in an attempt to demoralize the Allied troops, such as in the example portraying a mother alone with her children asking why their father isn’t there too. 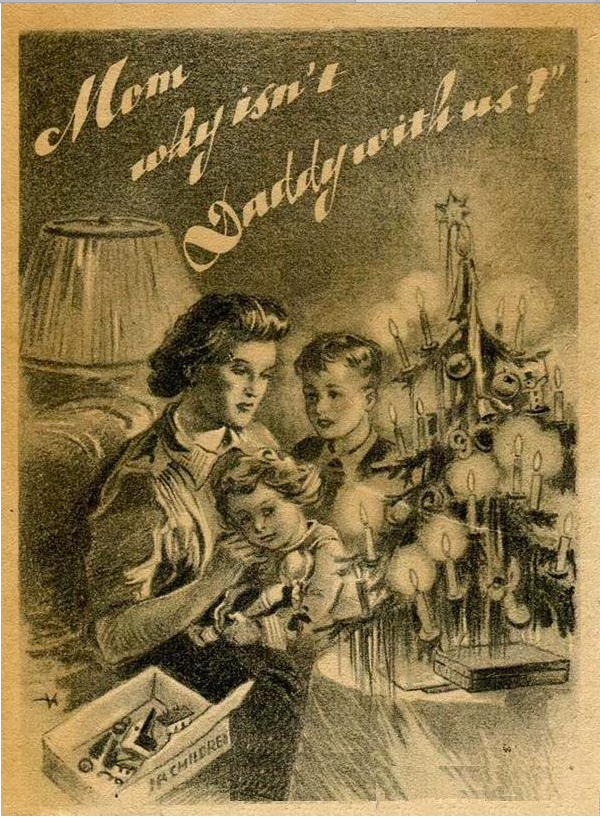 During the Korean War, Chinese propagandists aimed to provoke outrage among American troops by playing on class divides. This Christmas propaganda leaflet depicts men and women back home in the U.S. living it up in Florida, while below troops march in harsh conditions – asking the reader: Where are you? The leaflet questions the point of war and who profits, at what costs to others. 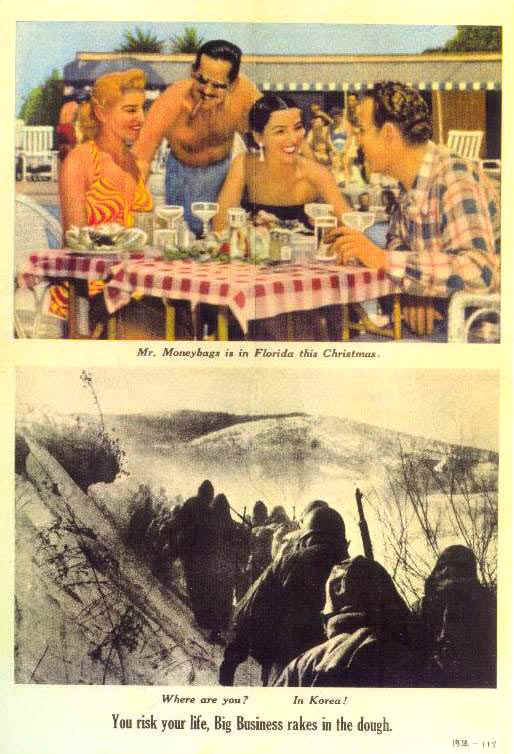 Much more challenging at Christmas is to boost morale in the midst of conflict to keep the fighting going. German propaganda during the First World War aimed to reinforce the morale of troops, by depicting soldiers celebrating Christmas at the front and at home. 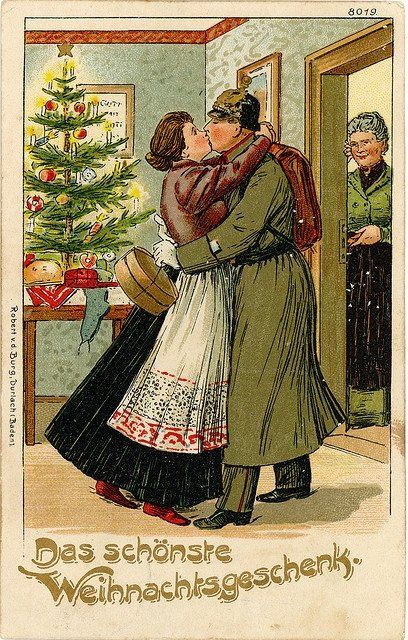 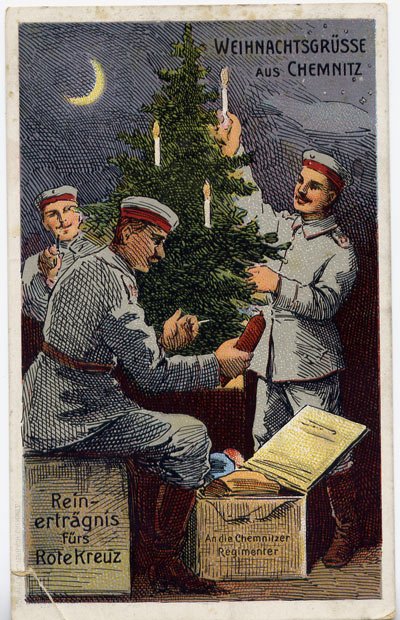 Some American war propaganda at Christmas took a decidedly cheerier tone. Posters from both the First and Second World Wars make use of Santa Claus to encourage people to support war efforts, both in terms of service as well as buying war bonds or sending packages to troops. 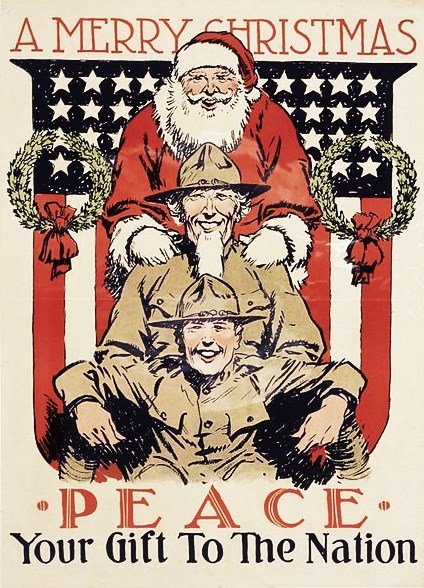 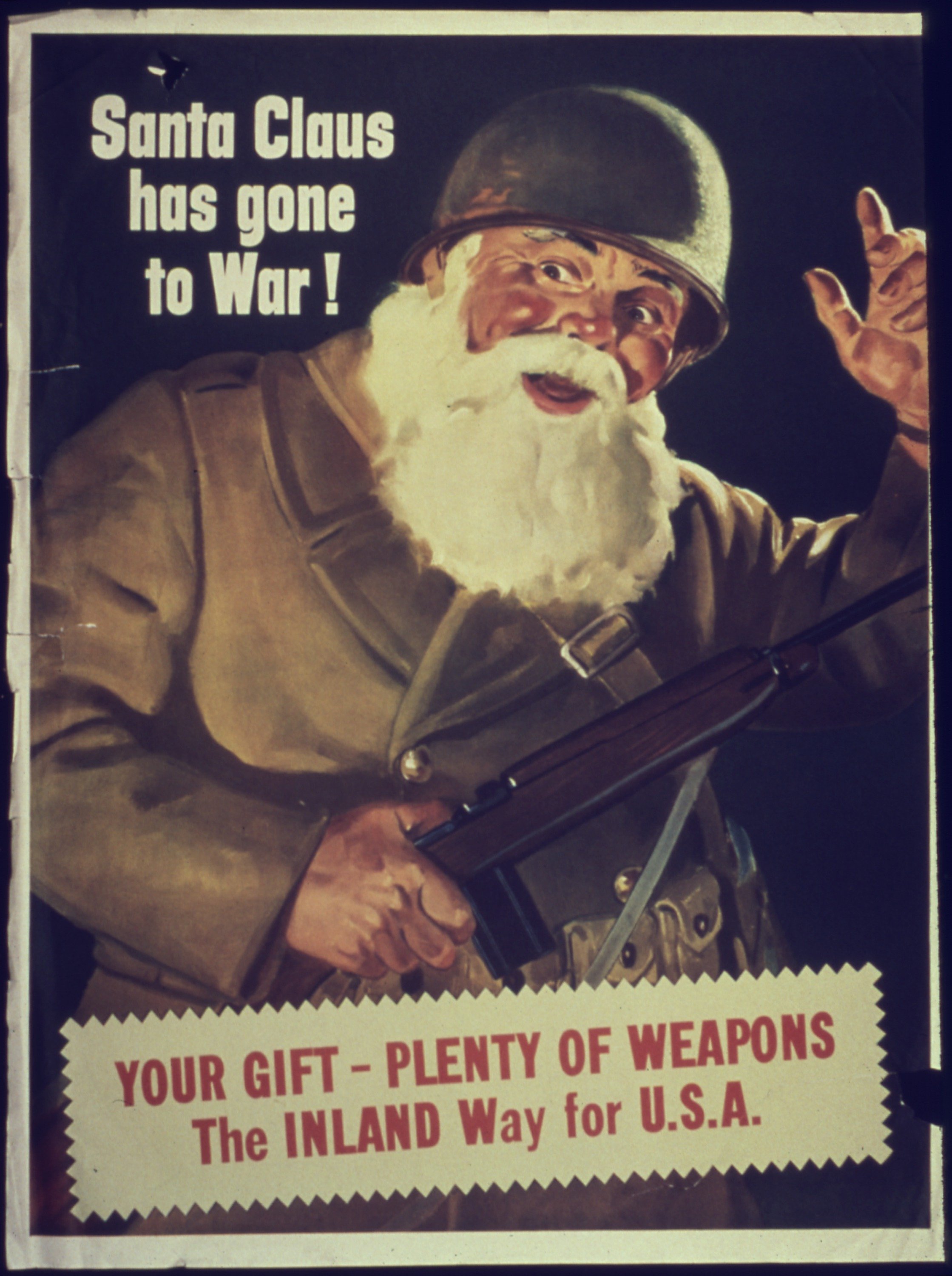 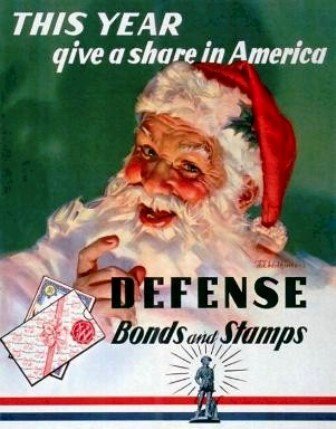 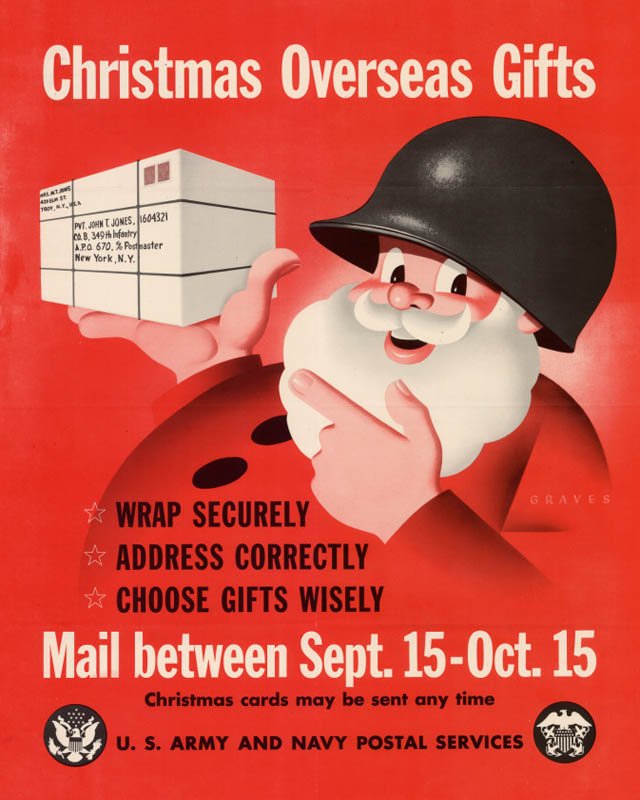 Santa Claus himself is an interesting case study in propaganda at Christmas. The North Pole dwelling man in red is a far cry from the 3rd century Saint Nicholas who dealt in more serious affairs such as saving “three poor sisters from being sold into slavery or prostitution by their father by providing them with a dowry so that they could be married,” rather than fulfilling children’s dreams of material consumption. As gift giving rose in prominence around Christmas time during the 19th century, Santa began to appear in store advertising encouraging people to shop. And “in 1841, thousands of children visited a Philadelphia shop to see a life-size Santa Claus model.” Arguably, it was an American company that shaped the image of what we think of as modern Santa Claus. Coca-Cola has used Santa in its Christmas advertising since the 1920s – and nothing is quite as propagandistic as advertising. 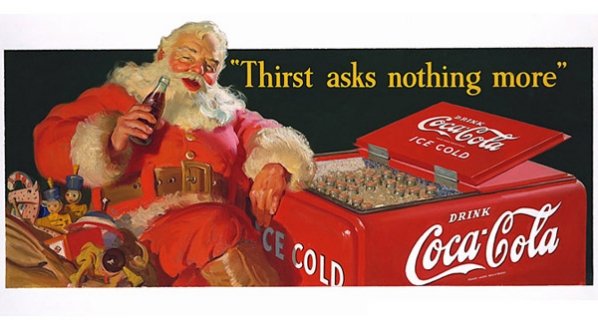 Christmas advertising often manipulates viewer emotion. Creating Christmas ads that go viral has become a competition among companies with the budgets to do so – and thanks to the rise of the internet. These commercials often provoke intense heartwarming reactions among the audience, depicting families reunited or the joy of unsuspecting customers having their desires fulfilled in real-time as WestJet likes to do. While these ads make audiences feel good, they also have an underlying purpose to promote the company behind the commercial, as well as their offerings, with the aim of encouraging target audiences to become loyal customers and consume (not to mention like and share that video online).

Of course, one man’s commercial Christmas propaganda is another man’s communist subversion. The FBI suspected the now classic Christmas movie “It’s a Wonderful Life” of being subversive communist propaganda, with its negative Scrooge-like portrayal of the capitalist boss, Mr. Potter, intentionally maligning “the upper class, attempting to show the people who had money were mean and despicable characters.” While it was the screenwriters behind the movie that were suspected of being “very close to known Communists,” the film’s director Frank Capra was a propagandist for the U.S. military during the Second World War – and the film adroitly plays at audience heartstrings as the protagonist learns what a world without him would be like.

The communist Soviets, for their part, turned from Christmas with all its religious trappings, to New Year’s to share propaganda aimed at encouraging patriotic fervor.  While earlier messaging reinforced the victory of the revolution, sending the first man into space afforded more celestial aspirations, featuring Father Frost in Soviet space age glory. 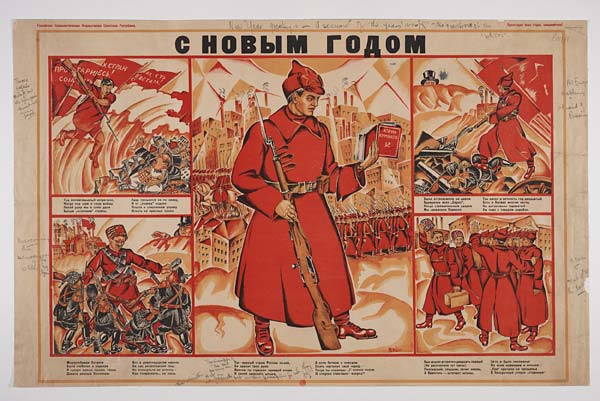 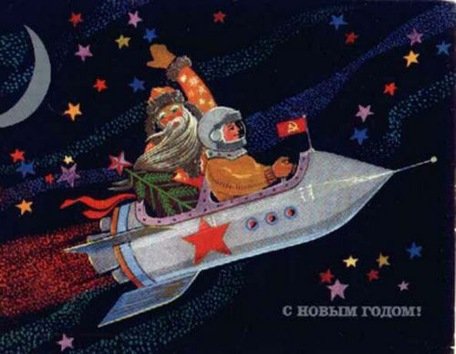 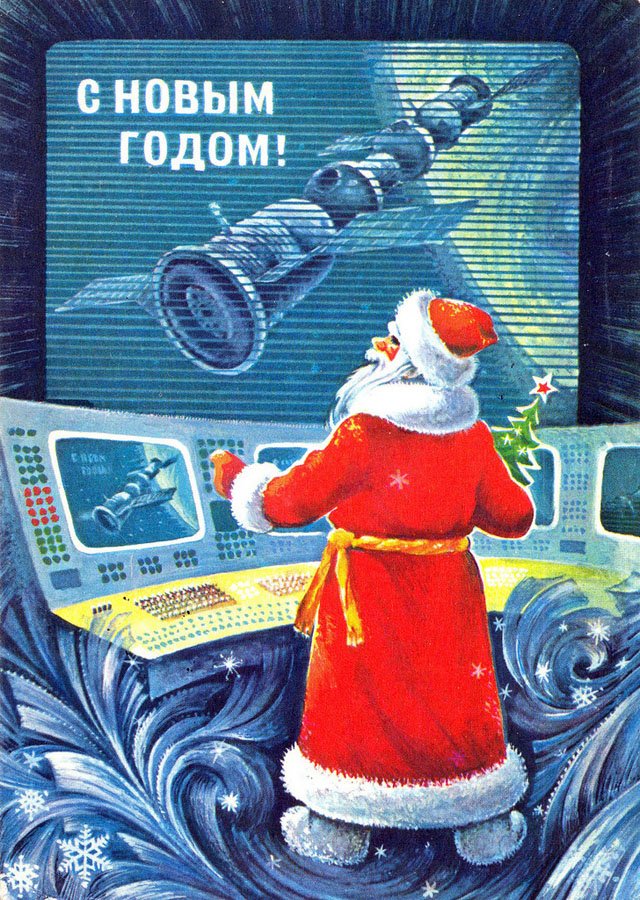 As long as Christmas sparks emotions, it will be used for propagandistic purposes. For every Christmas message you come across this holiday season – particularly those that make you feel something – stop and consider a few things: Who is behind this message? What feeling is it provoking? What is it the sender wants me to do as a result? Propaganda is all around – and if one isn’t paying attention, particularly at a time of year that’s fraught with emotion, being persuaded can happen much more easily.