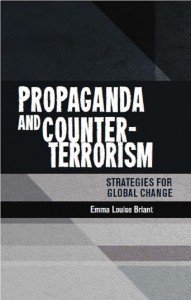 This book offers a unique account of British and United States Governments' attempts to adapt their propaganda strategies to global terrorist threats in a post-9/11 media environment. It discusses Anglo-American coordination and domestic struggles that brought in far-reaching changes to propaganda. Changes that had implications for the structures of legitimacy yet occurred largely in isolation from public debate. The fast-paced evolution of the global information sphere prompted rapid development of practices that raise questions regarding their governance. Dr. Briant argues that independent and public reexamination of continuing strategy development is essential for government accountability and the formation of systems and policies that both respect citizens and build constructive foreign relations. This book's themes will engage a wide readership including scholars, PR professionals and government personnel.

Dr. Emma Briant’s book Propaganda and Counter-Terrorism: Strategies for Global Change is a timely and must-read work, shining a rare light onto the mechanisms behind propaganda in the U.K and U.S.

Before delving too far into this book review, full-disclosure, your reviewer does know Emma Briant and thinks very highly of her as a person and researcher of propaganda. That being said, Briant’s Propaganda and Counter-Terrorism can stand on its own as a most necessary book, the undertaking of which should be applauded.

Propaganda and Counter-Terrorism is a scholarly work – and as such, it is not an easy read. (In that regard, Briant follows in good footsteps with the likes of Ellul.) Briant, however, writes in a refreshingly accessible style compared with most other academics, deftly bridging the 66 interviews she conducted with “Public Relations professionals, journalists, and foreign policy, defence and intelligence personnel.” Indeed, Briant’s book reads like a who’s who working in propaganda, information operations and public affairs during the Afghanistan and Iraq wars.

Beyond capturing the nature of cooperation between the U.K. and U.S. on propaganda during and immediately after the two conflicts, Briant puts these efforts into context within sociology, political science, and propaganda research. While on one hand that cooperation – and often the deficiencies around it – are explained in the words of those who were directly involved in that work, on the other hand, Briant contextualizes the dangers and wider social implications of such efforts:

“Regardless of whether he may feel ‘influencing people’ to be in the interests of mankind, Fallon’s ideas were clearly compartmentalized. According to Garratt most people ‘get into such a routine with their work’ that within a particular context they ‘view all problems in a similar way’ (1994: 42-43). Switching between contexts occurred with ease of habit and did not arouse observable conflict between Fallon’s values. It seemed important for Fallon to believe both in the importance of propaganda and in the importance of the existence of free debate, as represented in his comments above. It allowed him to define public interest in terms of the goals of the institution, and public service as what action served those goals. This potentially allows for much flexibility of action and initiative in ‘service’. As Ellul evocatively argued, propaganda “is comparable to radium and what happens to radiologists is well-known’ (11973: 242-243).”

Through first-person interviews and other research, Briant illustrates how the media was managed to gain public support for the war efforts, which ultimately had far reaching effects in the region, such as the rise of Daesh.

Likewise, Briant also pulls together a rare glimpse into the bureaucracy and different departments that, at times, cooperate to influence populations.

I particularly enjoyed the final chapter on Countering terror, denying dissent which seemed to be much more Briant’s own perspective and argument, cautioning against the use of propaganda and outlining the often disastrous impact such persuasion has both at home and abroad.

All in all, Propaganda and Counter-Terrorism should be read by anyone working in or researching the field. The picture painted through the practitioner interviews illustrates the on-going challenges of using propaganda for any “public good” purposes – and shines light on the very dangerous mentalities that can be developed in so doing. Perhaps the public should be thankful that cooperation between bureaucracies and countries isn’t better than what Briant has uncovered – if populations were persuaded with this level of dysfunction, there is no telling what an efficient effort might bring.

Propaganda and Counter-Terrorism is available for purchase at Amazon.