Polls of Persuasion: Beware of the Horse Race

What’s more important in a political race: Who wins the race or what the winner does after elected? Watching media coverage of elections might lead us to believe it is the former with a relentless focus on polls – but in a functioning democracy, shouldn’t we care more about the issues rather than the race itself?

Unfortunately, elections – the system by which we choose leaders – are reduced to a horse race in most media coverage. News stories are more likely to answer who leads in popularity, or who raised the most money, than anything of substance.

Polls and the Persuaded

And while journalists might remain idealistic believing they more often cover the issues than the polls, studies suggest otherwise. One report found that during the 2004 U.S. elections, for example, nearly 50 per cent of all news coverage featured ‘horse race’ angles, and less than 20 per cent “dealt with substantive matters.” This was echoed in the 2015 U.K. elections, where less than 50 per cent of news coverage was devoted to policy issues, dropping to even lower rates as voting day drew nearer. By the fifth week of campaigning, 22.7 per cent of all election news coverage focused on the ‘horse race’ alone. 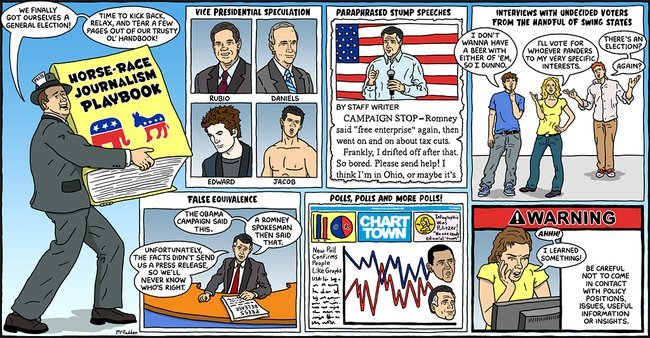 The lack of a policy debate also removes any questions about the candidate’s track record or ability to deliver on her promises. What’s more, polls have increasingly been inaccurate. While it is difficult to ascertain what exact effect polls have on the electorate, if voters are more frequently exposed to polling data than issues of substance their perceptions and decision-making will be affected. Indeed, polls (whether accurate or not) have been found to influence voters in the following ways:

Strategic Voting or a Tempering of Free Choice: Polls have been found to provoke strategic or tactical voting. In a first-past-the-post electoral system, people will opt to vote for a party that has a perceived better chance of winning, rather than their initial preference. This means people end up voting for whom they think stands a chance of winning, and not for whom they’d really like to.

Distorting Support/Dissent: If polls indicate that a candidate or cause has no chance, supporters are less likely to show up and demonstrate support. This skews the overall results in an election and dilutes the true scope of public sentiment on an issue. A dominant narrative in polls has led to self-censorship, for example, even among pollsters. One British polling firm that actually surveyed the electorate accurately in 2015, decided not to publish its own poll for fear of being an outlier – even though they were the only ones to be proven correct with the vote.

Fear-based Surges: Fear is frequently used to manipulate voters. In a tight race, trailing slightly behind the leading candidate can be a rather advantageous position. Polls have been found to encourage people to turn out to support the perceived underdog. This certainly seemed to work in 2015 for Benjamin Netanyahu and possibly David Cameron.

“One Conservative minister privately marvelled at how effective their party’s attack line was, asking voters to imagine a coalition between the SNP and Labour under Ed Miliband, joking that under Jeremy Corbyn, it’s a strategy that the party will be able to use again and again.”

Some have mused that the polls predicting a hung parliament in the British 2015 elections led to a last minute surge in Conservative support. Conservative messaging had suggested that a Labour win would lead to a coalition with the Scottish National Party, thus fuelling concern of what a Tory loss might mean – with polls to justify the fear mongering. These polls were later found to be faulty by the British Polling Council, failing to reach enough conservative respondents to make the survey accurate.

Of course, the polls were not the only questionable aspect about media coverage during that election. Other studies have found bias in news reporting on the parties, with the Conservatives gaining more airtime than others. Even in the one-on-one debates hosted by Channel 4/Sky bias was uncovered. Through linguistic analysis, one researcher showed that host Jeremy Paxman “allows Cameron to speak more and defers to his authority”, while ridiculing and undermining Miliband “more aggressively”. And this is to say nothing of the open attacks on Labour featured through the right-leaning U.K. newspapers. This leaves a lingering question of the role of media in elections – and not as impartial media performing a crucial role in democracy, but as an opinion shaper.

Focus on polls in media coverage isn’t restricted to poor quality of journalism either. Quite the opposite, in fact. Horse race coverage, according to another study, is “most frequent in polarized party systems with close electoral contents, and in large markets with professional journalists.” This focus on polls could lead to manipulation both of media and the electorate as a result. Consider the U.S. 2016 election, for example, in a highly polarised society split down a two-party line, polling could be used to sway voters – and the more the horse race is the focus of election coverage, the more likely this influence is to occur.

What Is To Be Done?

While the media and pollsters bear the brunt of responsibility for this distortion of election coverage, it is unlikely that either will cease to represent elections as horse races. Despite the media’s self-portrayal as a linchpin in democracy, business remains the bottom line – so long as covering polls or relaying unverified candidate quotes is cheaper to cover and, more importantly, readily consumed by the masses, the horse race will remain the focus of election coverage. For the voters, however, there are other options.

Ignore the Polls: If millions of Star Wars fans can bind together and not spoil the latest release for one another, surely society has the discipline to ignore polls. Instead of following polls, turn the TV off, or avoid news pages that have polls. Media is tracking your every click and view – vote with your eyeballs.

Focus on Facts, Not Sound Bites: One study showed that 60 per cent of journalistic tweets about candidates in an election were unverified, verbatim quotes. How much of the other coverage to which voters are exposed is similar? Instead of focusing on unfiltered sound bites, follow initiatives such as Politifact’s Truth-o-Meter to get a better sense for how accurate a candidate is.

Look Beyond Party Lines: We want to believe things that confirm our existing views of the world. This leaves us susceptible to messaging from parties and politicians that reflect what we believe. Avoid the lure of belonging to this or that party, and focus on key issues. While some systems, such as in the U.S., demand party membership in order to pre-select one of two main presidential candidates, consider only holding membership for that purpose – and look more broadly if your preferred candidate does not win the primaries. Of course, you could always campaign for an end to the party-based system too…

Vote With Your Conscience: Coverage of polls will sway how you vote, encouraging you to “vote strategically”. Don’t let polls belittle the importance of your vote – suggesting that your choice to vote for whom you want is just a throw-away should that candidate be projected to lose in the polls. Imagine if more people decided to vote how they truly wanted, rather than strategically as led by the media and polls. This isn’t the lottery – in fact, your outlier candidate probably stands a better chance of winning the elections, than you do on that ticket – and better yet, it won’t cost you a thing or party membership.

If you care about the future, foster an understanding of how polls and the media shift your attention away from serious debate to focus on trivialities. Betting on a horse race might give you a few thrills – and a loss might not seem critical – but in real life, elections are a rare opportunity for you to exert influence. Don’t squander your once-in-a-term voice on a silly bet.