Participatory Propaganda and the 2018 Ontario Election

Two “grassroots” political Facebook pages outstripped official party pages in follower engagement during the 2018 Ontario provincial election. While both Ontario Proud and North99 positioned themselves as being community-based pages, each were created and run by former political staffers, which raised questions about their independence and grassroots claims, especially given the former was able to run television ads and targeted SMS campaign in support of the Ontario Conservative Party’s platform.

Moving a step beyond our initial research on participatory propaganda, this study analysed how audiences engage with online propaganda in the political context. This case study analysed comments and shares on five political Facebook pages in the month (7 May to 6 June 2018) leading up to the 2018 Ontario election on 7 June 2018. These Pages included the three major official provincial party pages (Provincial Conservative – PC, Liberal, and New Democratic Party – NDP), as well as Ontario Proud (pro-Conservative) and North99 (pro-Liberal). The latter two pages were created by two former political staffers from the Conservative and Liberal parties, respectively, purporting to be grassroots-driven and among the most popular political Facebook pages in Canada . According to the social analytics tool, Social Insider, both Ontario Proud and North99 have double the following of the respective political parties they support (Fig 1) and garner significant audience engagement (Fig 2).

Ontario Proud was launched 24 February 2016 and purports to be “for the many, not the few” and is self-categorized as a non-profit, community organization and media page. In what appears to be a response to the success of Ontario Proud, North99 was launched on 6 August 2017 and claims to be “building a progressive Canada” and is self-categorized as a community page. Both pages post mostly political content, often in simplified form aimed at provoking a response from their audiences and criticizing their political opposition. Both pages also appear to be part of a wider network: Ontario Proud supports and engages with other similarly named pages (sometimes featuring those administrators as average citizens in videos – and also appeared in past research we conducted in Canada); and North99 launched another page called Together Against Hate and runs an eponymous Facebook group.

Both Ontario Proud and North99 engage their audiences. In the top 20 posts during the period analysed, 70% of Ontario Proud’s posts and 85% of North99’s asked followers to take a specific action, whereas the parties did so less frequently (NDP 55%, PC 35%, and Liberals 15%). (Note: Social Insider ranks posts by engagement levels, including comments, reactions and shares.)

In order to assess how audiences engaged, the top two posts with political messaging directly related to the election were selected for each of the five Facebook pages using Social Insider. Non-election related posts aimed at gaining new followers, such as Ontario Proud’s top overall performing post for the period, a patriotic boast about Canada’s oceans, lakes, coastline with pictures and a call to action of “Share if you are Canada proud” were ruled out (although the value of such ‘patriotic’ posts should not be underestimated since they both boost sharing, and thus page recognition, and make a subliminal association between Ontario Proud page and being a proud Canadian stronger). On one post the 50 most recent public comments were analysed, on the other post only shares were examined. The publicly available profiles for those users who commented or shared were also manually examined, totalling 500 Facebook accounts, respective comments or shares.

Screenshots of the posts analysed are below, with the post whose comments were analysed to the left, and the shares to the right. 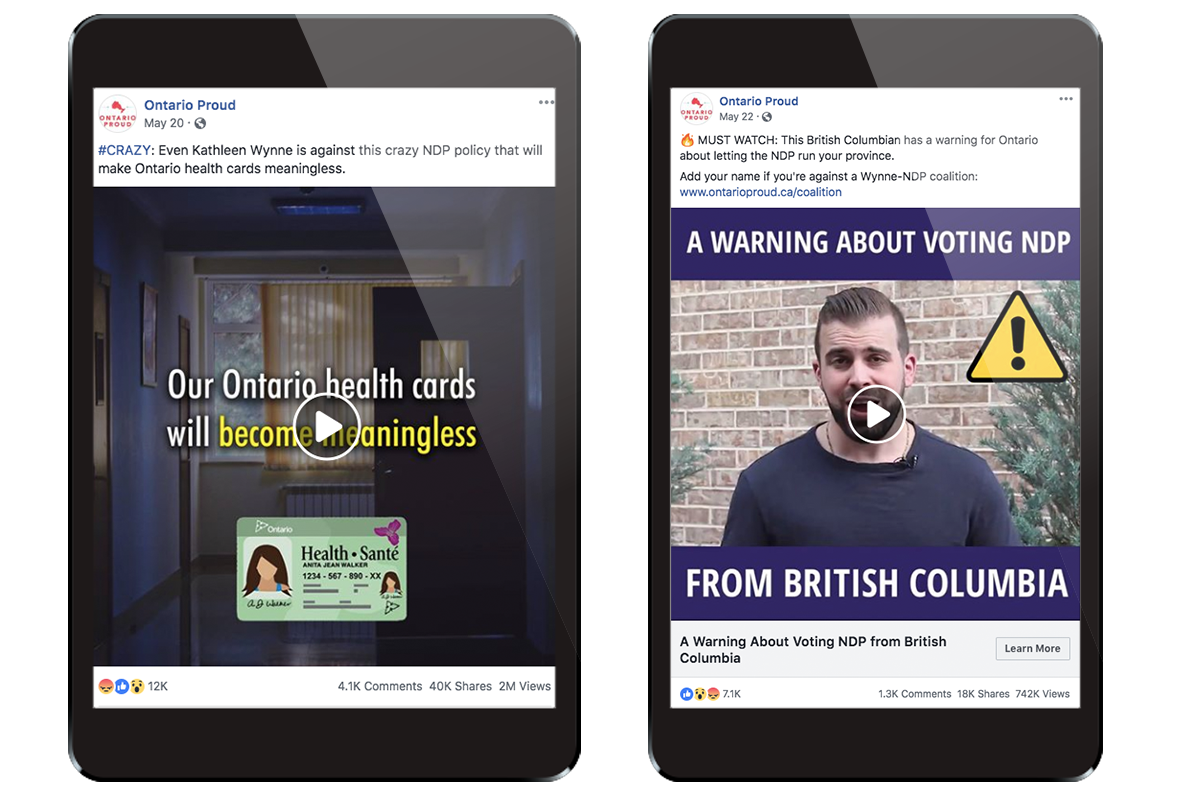 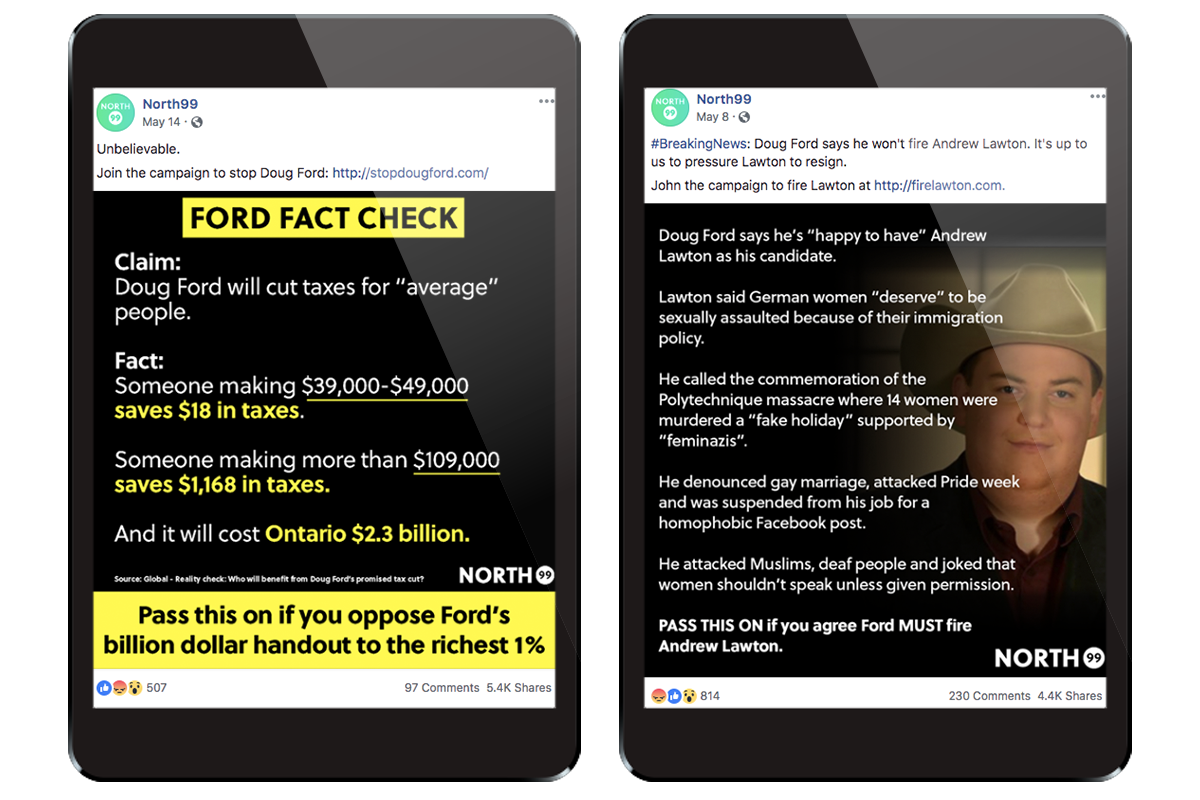 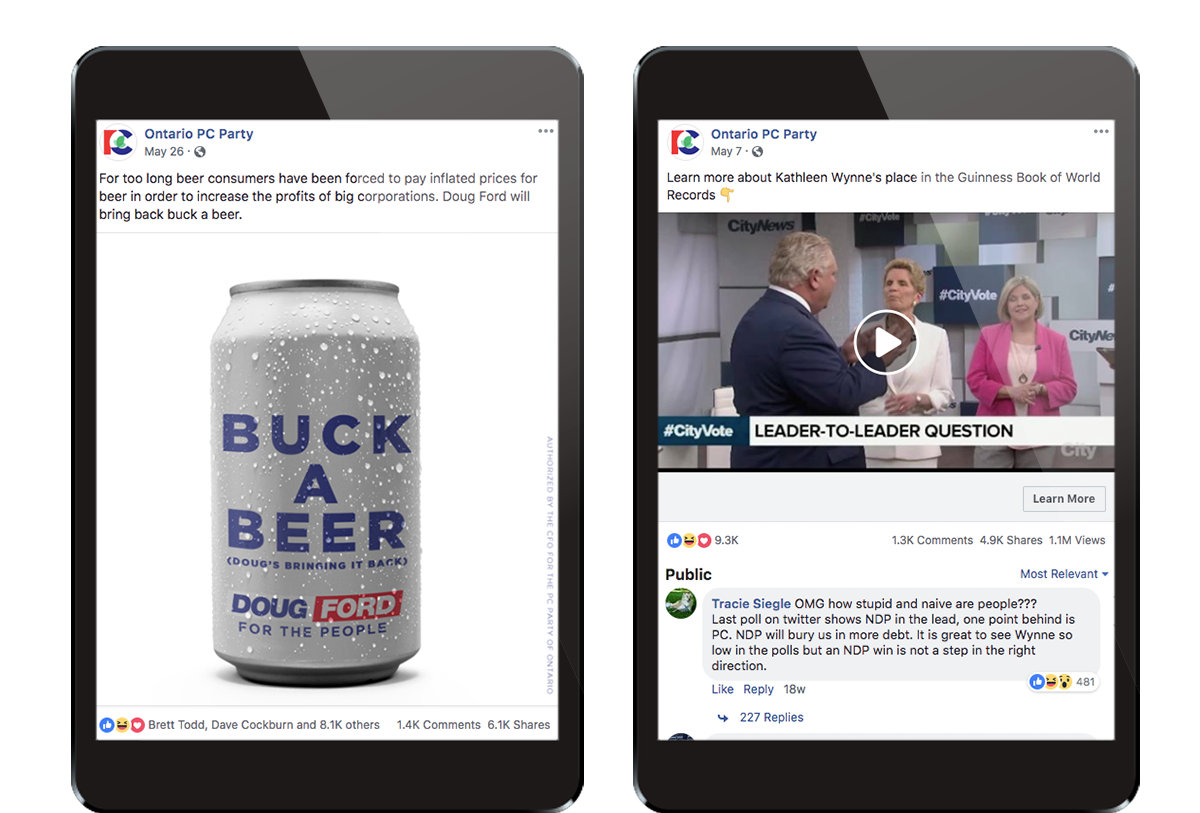 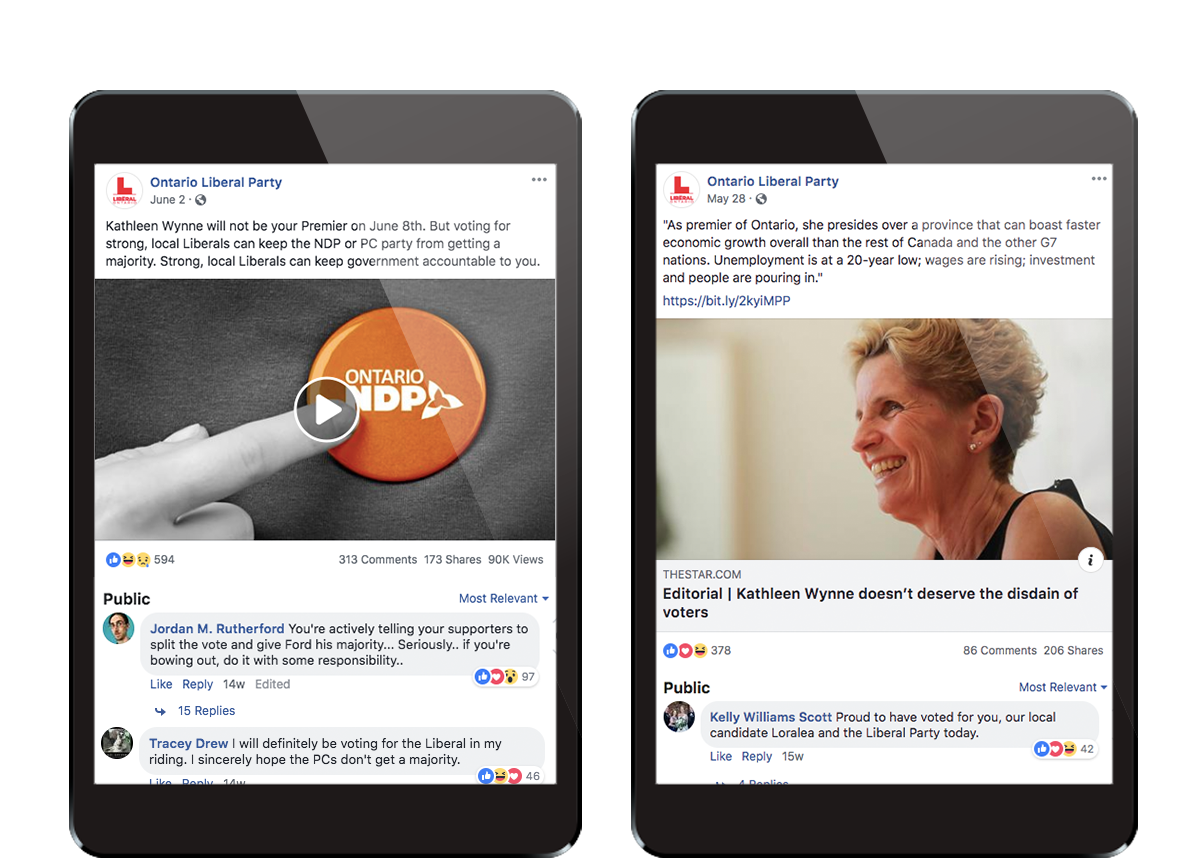 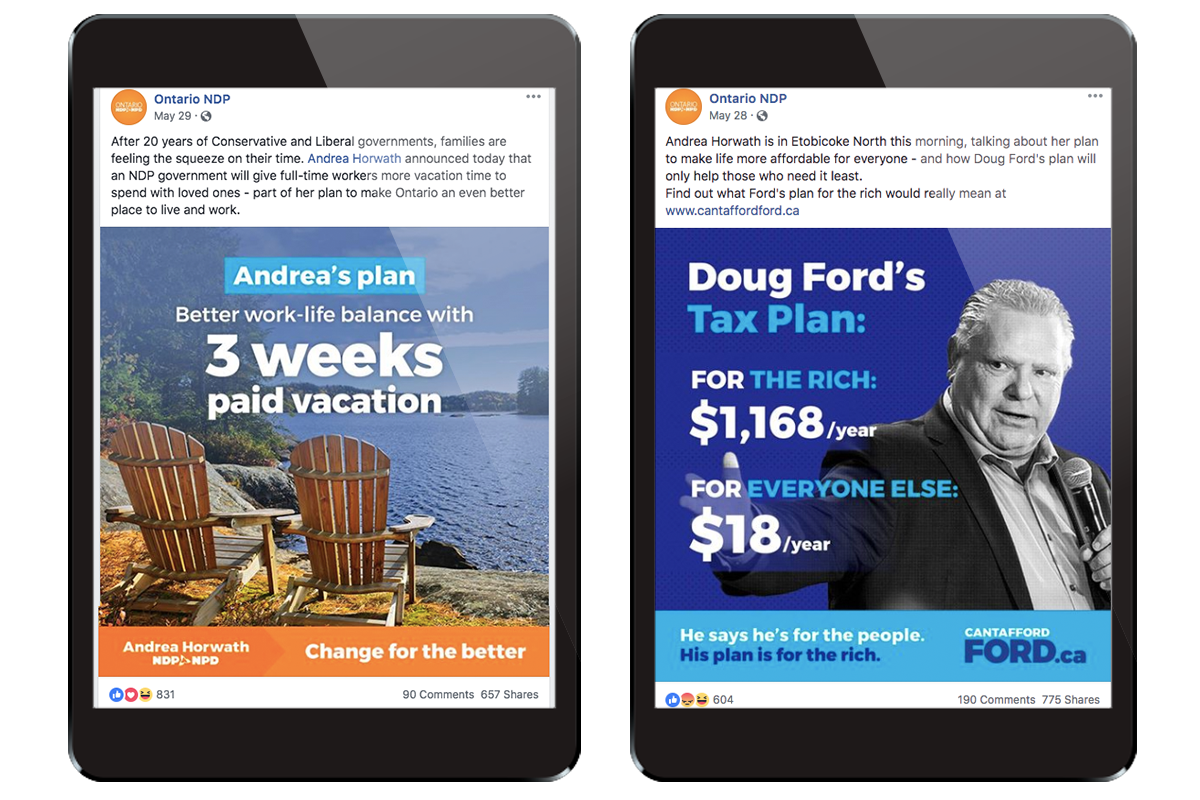 Each comment and share were reviewed and coded as being either supportive, rejecting or ambiguous in relation to the original Facebook page post. The user’s profile was examined for authenticity (based on interactions with other users and whether or not they had family within their network) and to ascertain if they were regularly posting or sharing other political content to their wall.

On average, across the five Facebook pages, the majority of users engaging with posts were authentic (67% of those who made comments and 97% of those who shared). Overall, users who posted comments were more likely to be supportive of posts made by Ontario Proud (63%) and North99 (65%), in comparison to comments on the political pages (PC 19%, NDP 13%, Liberals 17%), which may indicate a greater level of trust for pages that are perceived as grassroots rather than official party pages where more debate usually takes place. On average, 44% of all commenters and 68% of all sharers across all five Pages regularly posted other political content on their Facebook walls, suggesting that they are active in propagating their political views to friends online. Authentic users, who were politically engaged (Fig. 3), showed their support for the original post by sharing it to their network (64% of users in the study). This finding supports other academic research arguing that content that resonates with users will have higher chances to be promoted (Garrett & Weeks, 2013). Most of the sharing was done with little alteration of the original post, and only two to nine shares (4 to 18%) in each group had a user comment ‘introducing the post’ to their networks. The same, however, cannot be said about users who simply comment on posts as their level of ‘support’ was relatively low, at 14% only (Fig. 4). 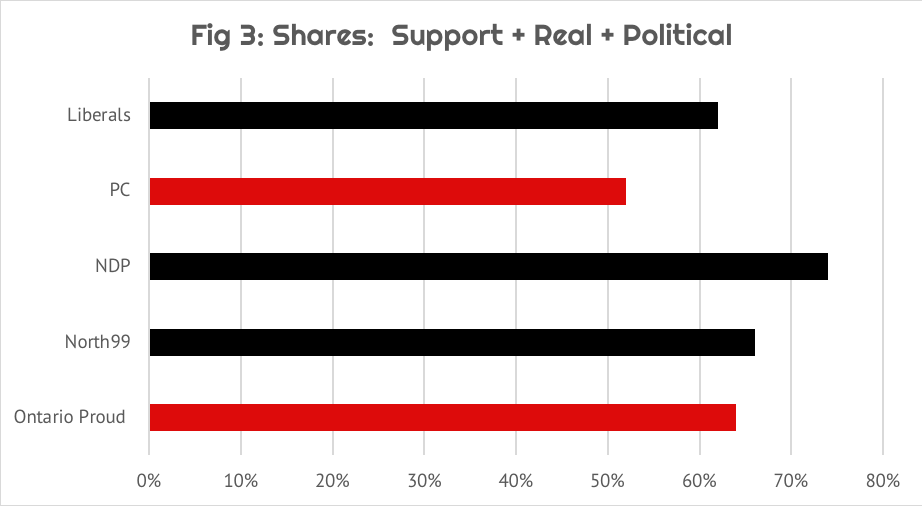 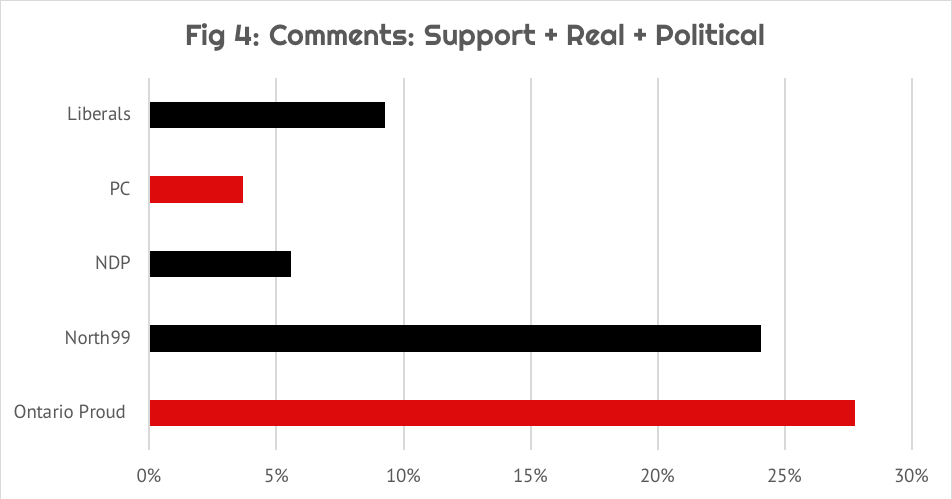 Since message amplification is another aim in participatory propaganda, we also examined how many secondary shares the original post received beyond the first group of 50 users who shared it (the 1st information wave). Table 1 below demonstrates the 2nd information wave that was achieved in each group as 10 to 52% of users chose to re-share the original group post to their own networks, in turn, increasing the message amplification. Depending on the group, content appeal and, likely, communications and behavioural profiles of users, the 2nd information waves added anywhere between 14 to 80% amplification to the first round of shares. Since many Facebook users’ settings do not allow viewing their profiles and activities unless they are ‘Friends’, we were not able to pursue the analysis further beyond this point to gauge the existence of possible 3rd or even the 4th waves. However, the amplification percentages observed even in this small sample suggest the importance of engaging audience participation in furthering the propagandist’s objectives (Fig. 5).

This preliminary analysis illustrated that authentic audience members are engaging with persuasive content, and moreover, propagating views that resonate with their own political perspective on their personal Facebook walls. Elements of the Participatory Propaganda model such as hyper targeted audience analysis and targeting of echo chambers (followers of perceived “grassroots” Pages in this study), are instrumental in achieving higher rates of engagement as knowing user profiles and interests enables the creation of customisable content that appeals to target audiences. If monitoring of user activities and reactions to content on social media channels can be further automated through technological means, the spread of original posts could be followed and adjusted in line with campaign goals. 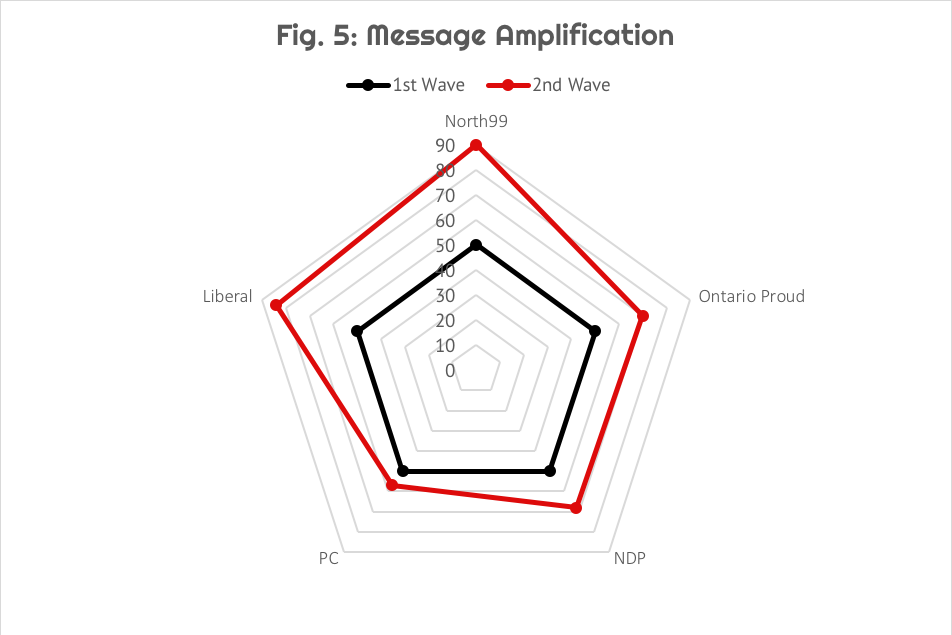 The study also raises questions around how political propaganda is presented to voters online. As noted above, while both Ontario Proud and North99 position themselves as grassroots, the men who launched these pages are former political staffers – one for the federal conservative party and the other for the provincial Liberal party in Ontario, blurring the line between what is authentically “of the people” and what is driven by bigger political agendas. Indeed, how “grassroots” an organization is that can afford to run TV ads (Ontario Proud, 2018) and send direct SMS messages to voters during an election (Hauen, 2018), as Ontario Proud was able to do?

As the use of social media in political campaigns occupy a more significant role in elections, the provincial Election Commissions might have to start looking closer at the grey areas around political advertising and fundraising, and how the self-proclaimed “grassroots” activities online are conducted. Considering the widespread use of social media platforms as sources of news content and the influence they may exert on the public, more organized efforts at educating the public about various pitfalls is required. Moreover, further analysis is needed of how online behaviours by malicious actors, both internal and external to Canada, may be harming the electoral process through the shaping of the information environment.

This piece is part of a longer chapter called “The Audience is the Amplifier: Participatory Propaganda” in The Sage Handbook of Propaganda written with Michael Berk.

Cover image: A Propaganda poster issued by the Director of Public Information under authority of Hon. J.T. Thorson, Minister of National War Services, Ottawa during the Second World War