Upon downgrading my LinkedIn account, I found myself with 15 unused inMails and a burning desire to use them up. The problem was, I didn’t know whom to contact.

Then Maurice Little took the time to send a note simply remarking on a comment I had left on an Influencer post. His compliments gave rise to an idea: why not contact people who had inspired me?

With 15 inMails and a few days to use them, I suddenly felt pressured.  Who had inspired me? 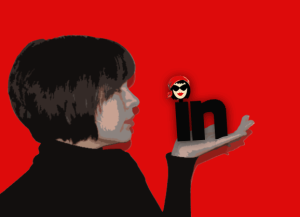 I immediately thought of people like Edward Bernays and Robert McNamara, both talented men in the dark art of propaganda. Just one problem, they, like many of the authors who have inspired me, are dead.

OK, what about other things I have recently read that left an impression? Looking up at the bookshelf I spy Trust Me, I’m Lying, by Ryan Holiday.  Chris Brogan also influenced me early on. And Philippe Dubost inspired me to create a series of strange resumes.  Of course, there too was a catch: I am in contact with all of these gentlemen on one social network or another.

Conan O’Brien came to mind, but given how unresponsive he was to my impulsive LinkedIn invitation, I figured an inMail would just be a bit too stalker-ish.

Then I recalled Terry O’Reilly. He was the first recipient of my inMails of compliments.

The interesting thing about inMails is that a recipient must accept it, before it is marked as used on a Premium Account. If the recipient refuses to accept the message, the inMail is accredited to your account anew, and accrued. I like the idea of this because despite the connectivity the internet has afforded us, there is still no guarantee that a person will engage.

Terry O’Reilly is a prime example. Like Conan, I have reached out to Terry in the past, but have only been met with radio silence. Of course, he must be a busy man and this is not to suggest that my messages are so compelling that he would respond to it before the other throngs of fans. However, I find his lack of response curious in an age where most authors and professionals have been responsive – especially to compliments.

With two celebrities topping the list, my approach seemed headed for a derailment. Perhaps the problem was that I was only thinking of the famous. Are they truly inspiring? Or are they merely so visible that they immediately come to mind?

Thus, I began to think about projects that stood out. The Old Spice Guy campaign and Airbnb came to mind. This took care of two more (as of yet unclaimed) inMails to Craig Allen and Brian Chesky, respectively.

Then I remembered one of my favourite commercials – a joke which I repeat to this day: Berlitz & The German Coast Guard:

A quick Google search revealed its maker as Thorbjørn Naug. As luck would have it, Thorbjørn was on LinkedIn. I sent heartfelt compliments to the Norwegian creator, who responded with thanks before the close of business that day.

At this point, with but 5 people on my inspiration list, I took to Twitter and Facebook, asking who inspires them? In a twist of fate, Philippe Dubost retweeted my inquiry. Asking Twitter was like contacting Terry O’Reilly, however, nothing but crickets could be heard – if, in fact, crickets dwelt in the Twitterverse.

Facebook was a bit more helpful. My friends, though, experienced the same dilemmas as I did. Most of those who inspired them were also dead. Or, like Sara Blakely, were not on LinkedIn. One proposed candidate I had even met in the past.

Then Sandra McKenna posted a video and comment on DJ Edgerton’s wall noting how he inspires her. With interest did I watch DJ’s interview on Bloomberg:

As it turns out, DJ is one of the brains behind the Anchorman 2 media blitz, which uses the lead character as a marketing vehicle. Beyond DJ’s creativity and leadership, his interview indicates that he is also humble. Happily inspired by his work and his behaviour, I sent him my compliments too.

DJ sent his thanks, adding that it was “One of the nicest comments I had today.”

In four days seeking inspiration, both past and present, I managed to send just 5 inMails before my Premium account expired.  On one hand, I felt grateful that so many inspiring people were engaging. On there other hand, the question nagged, was I so jaded that very little today inspired me?  Or had everything become fleeting in an always-on digital world, rendering little memorable amidst the constant onslaught of information?

It all left me wanting something odd for the holidays – inspiration.

This experiment in reaching out was worth it, if for no other reason than a couple of people could be reminded of the impact of their work. I just wish there were more I could have reached… or thought of, for that matter.

Who inspires you? If you tried these same experiment how many people would you be able to contact?