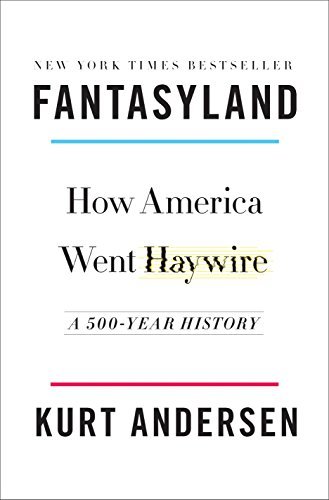 In this sweeping, eloquent history of America, Kurt Andersen shows that what’s happening in our country today—this post-factual, “fake news” moment we’re all living through—is not something new, but rather the ultimate expression of our national character. America was founded by wishful dreamers, magical thinkers, and true believers, by hucksters and their suckers. Fantasy is deeply embedded in our DNA.

Over the course of five centuries—from the Salem witch trials to Scientology to the Satanic Panic of the 1980s, from P. T. Barnum to Hollywood and the anything-goes, wild-and-crazy sixties, from conspiracy theories to our fetish for guns and obsession with extraterrestrials—our love of the fantastic has made America exceptional in a way that we've never fully acknowledged. From the start, our ultra-individualism was attached to epic dreams and epic fantasies—every citizen was free to believe absolutely anything, or to pretend to be absolutely anybody. With the gleeful erudition and tell-it-like-it-is ferocity of a Christopher Hitchens, Andersen explores whether the great American experiment in liberty has gone off the rails.

While the results of the 2016 U.S. presidential election weren’t as surprising around here, if they came as a shock to you, be sure and add Fantasyland: How America Went Haywire: A 500-Year History by Kurt Andersen to your reading list.

While Andersen’s book might not be an academic work, it is well researched and immensely enjoyable. The author’s background as a fiction writer and radio show host has likely helped make this book the easy read it is, but it is the wealth of information packed into this book that really makes it worth the while. (For a bigger treat, try the audio version which is narrated by Andersen himself.)

The overall thesis of this book is that Americans have long held some curious, if not fantastical, beliefs that have shaped national narratives since the Puritans arrived on the land’s eastern shores. From the promises of gold deposits encouraging financing for the first European settlers to growing fears of child abductions in the late 20th century, Andersen presents a long list of misguided beliefs with examples spanning hundreds of years, and from across the political spectrum. Despite the vast time frame and variety of case studies, Andersen stays true to his main thesis and brings it all together nicely. Throughout it all, the author paints an informative and entertaining picture of how fantasy and reality have long intersected in American thought, not just shaping perspectives, but also affecting decision-making sometimes at the highest level of government.

Fantasyland: How America Went Haywire: A 500-Year History is available on Amazon and Audible.

Cover Image: In a blend of fantasy and reality, the cover image for this post draws from Second World War replica propaganda posters created and featured in Marvel’s Captain America: The First Avenger launched as available pieces in 2012.