Bernie Sanders proudly describes himself as a “socialist” (or a “democratic socialist”). His Facebook Page is a reflection of his revolutionary manifesto; the posts are all about the collective “we”. No other candidate uses the first person plural voice as much as Sanders, with 78% of his Facebook posts including pronouns such as we, our, and us. When speaking in the first person singular, Sanders still manages to invoke the collective. Even his modest use of hashtags (in 12 per cent of posts) features similar terms such as #VoteTogether and #NotMeUs. This inclusive voice helps Sanders “express solidarity with the group” and position himself as a man of the people. ( See Figure 1 Pronoun Usage) 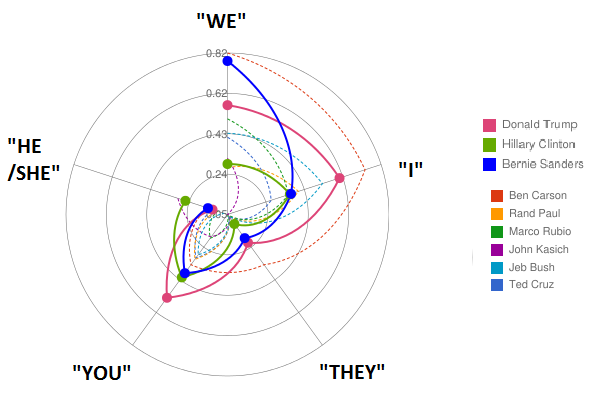 Figure 1: A Radar or Spider Chart showing how often each candidate used personal pronouns. It is often used to find outliers. For example, Sanders uses the collective “We” in his Facebook posts more often than the other four candidates. 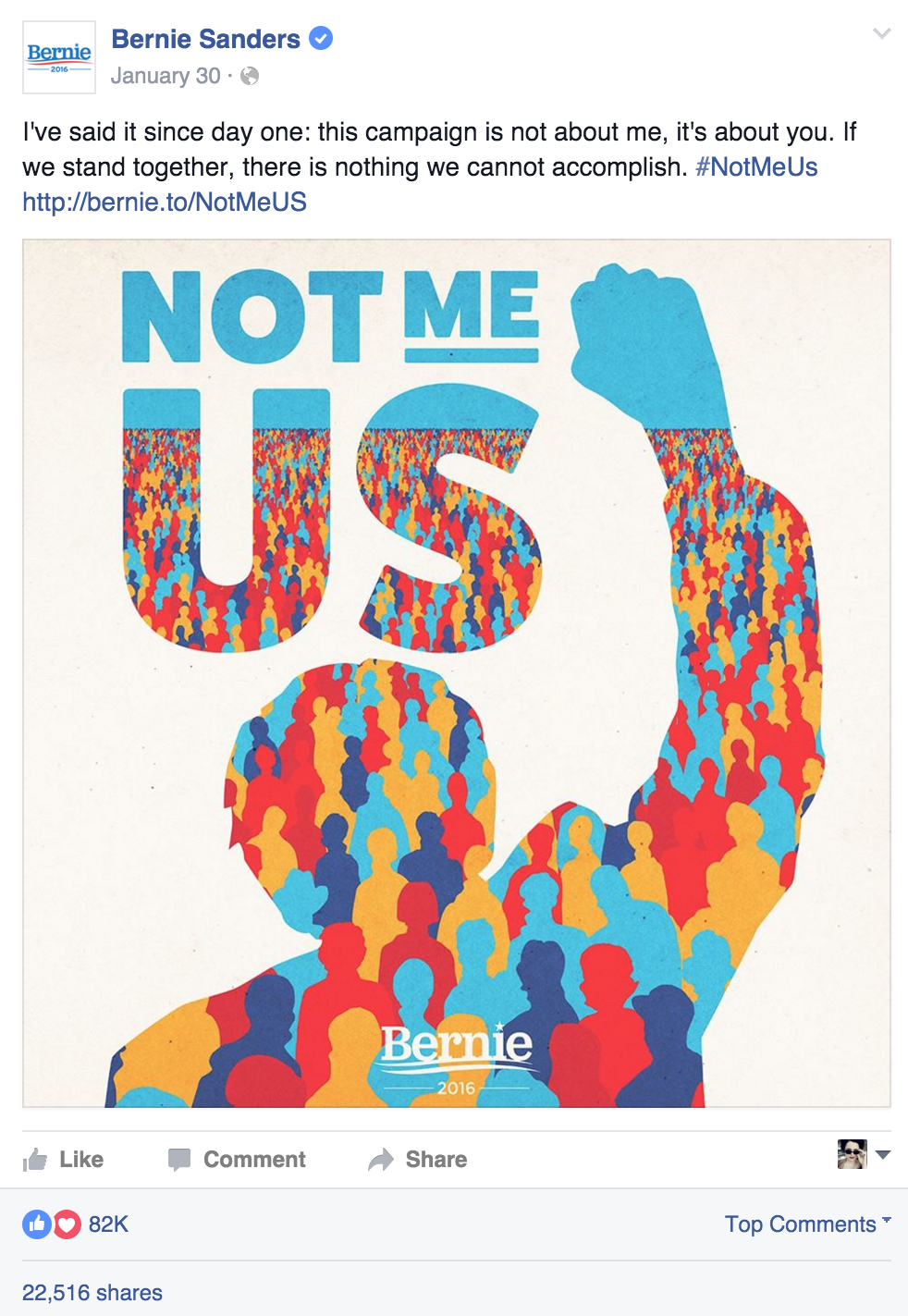 This is not to say that Sanders’ Facebook page isn’t managed – it most certainly is. As noted in the section on Trump, Sanders’ Page makes use of Facebook hacks, such as adding historic events to the Timeline, and posting pictures that make for a better collage in the featured Photos section. (See Example 1 – Use of Facebook Hacks)

Sanders quotes are more often posted inside of images, rather than as coming from his own first person singular voice – as Trump does. And campaign videos aimed at helping supporters caucus in specific states are clearly created by the campaign, featuring volunteers and supposed regular people on the street. Sanders is not likely to have created, much less posted, any of this content himself.

Example 1: The timeline on the Sanders Facebook Page has been updated to include historic events, feature Pages to highlight a network, and apps for donations

However, given that Sanders (along with Rubio) made the fewest posts to Facebook during the period studied, his campaign resources for social media outreach could be significantly more modest than say that of Clinton. Campaign funding seems to support this, with Clinton having raised nearly twice as much and spending $15.9 million more to date.

Sanders’ posts stay on message, with keywords from his campaign slogan “A political revolution is coming.” appearing in the most used words as identified by Netlytic. ( See Example 2 and Figure 2) 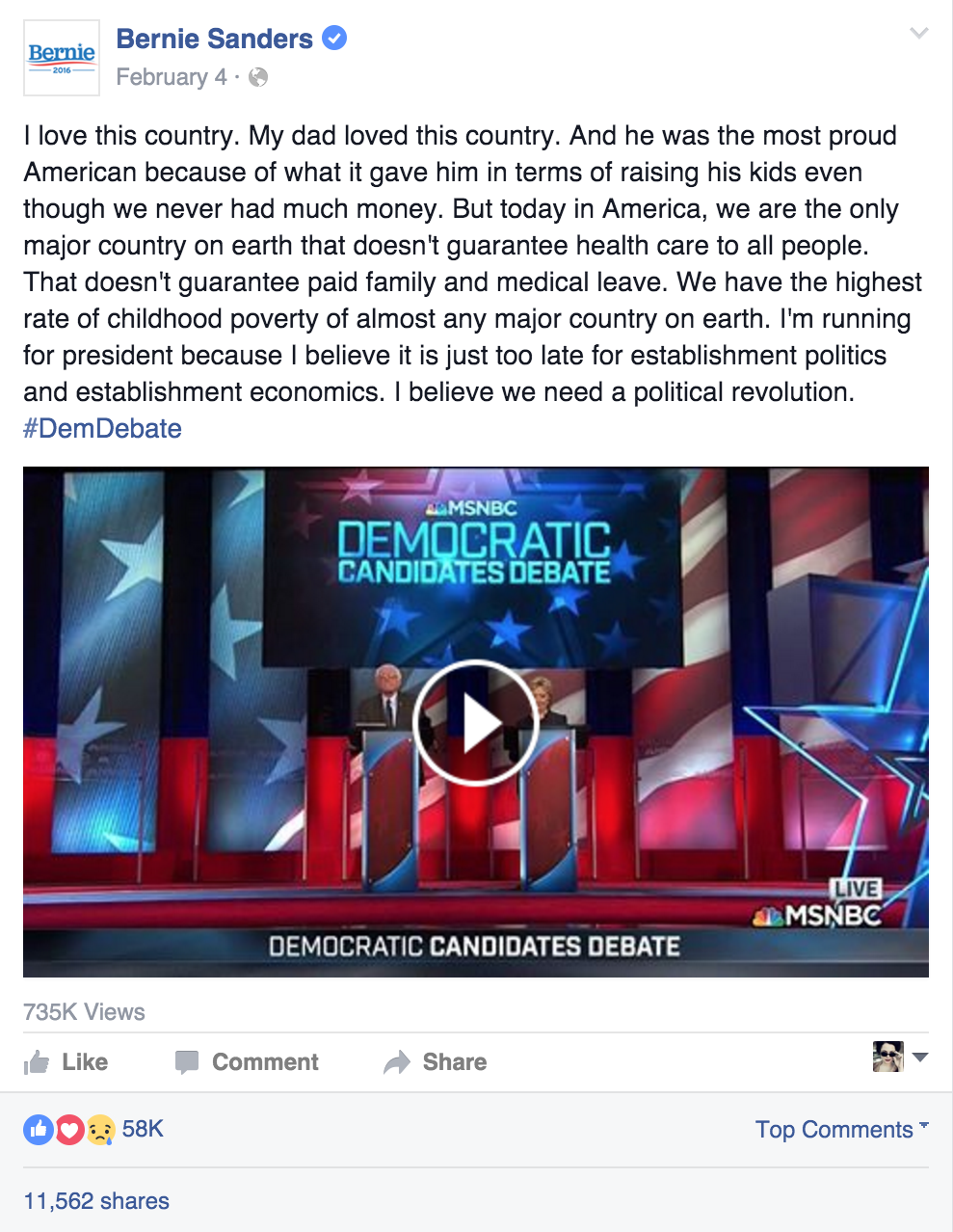 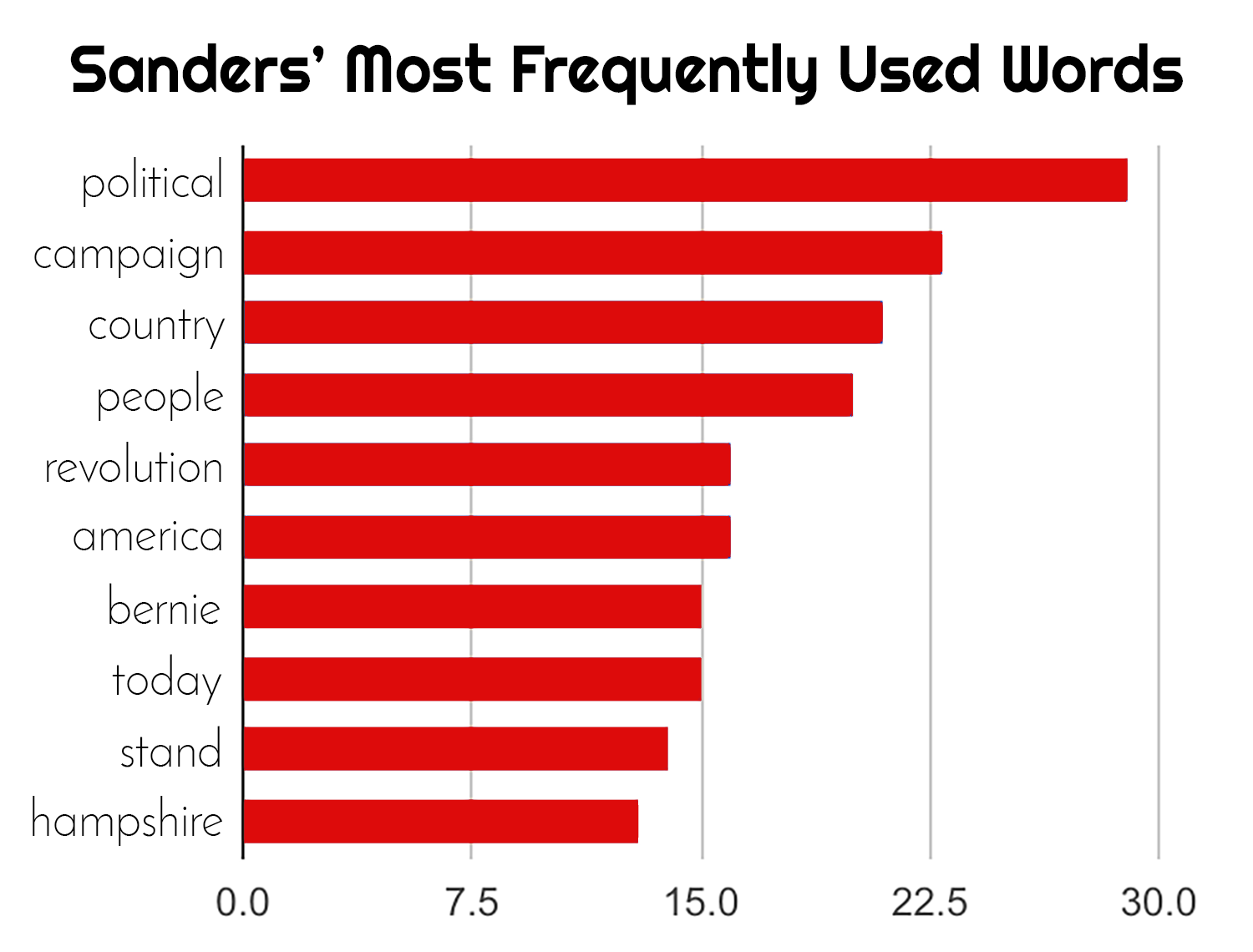 And while Sanders obviously discusses the campaign, as indicated by his most used words, manual review of his top 25 most liked Facebook posts during the week February 2-19, 2016 suggested that he made more mention on key issues than any other candidate. Perhaps less surprisingly, the economy was mentioned in 44% of Sanders’ most liked posts. ( See Ex. 3 and Fig. 3) 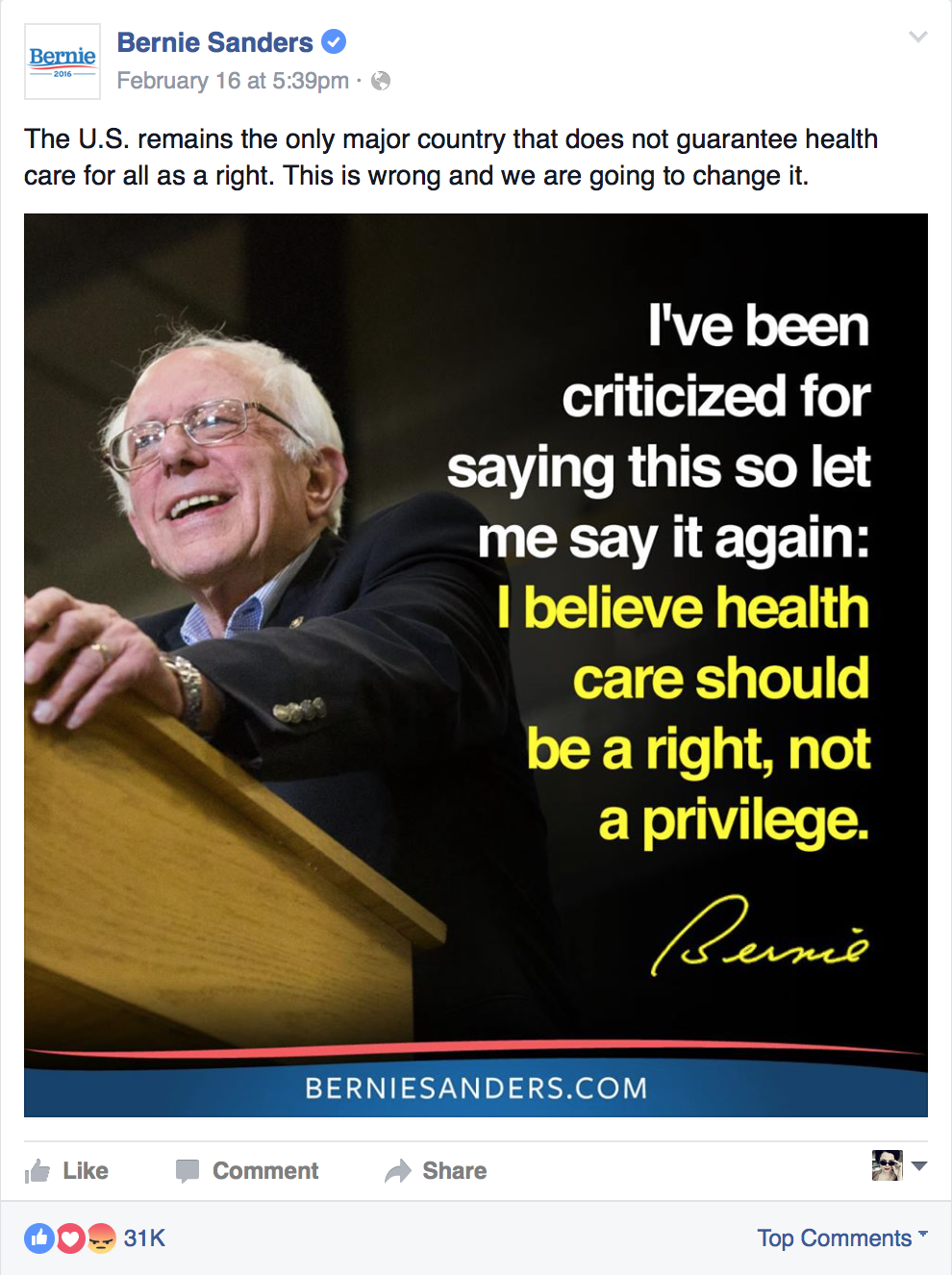 Despite posting less frequently than Clinton, Sanders enjoys more Page likes and comparable rates of being talked about on Facebook. This might explain why Clinton’s messaging has begun to sound quite familiar to that espoused by Sanders (note the time stamp on the posts below, as first uncovered by a dedicated Sanders Facebook support group.) (See Examples 4 and 5; Figures 4 and 5) 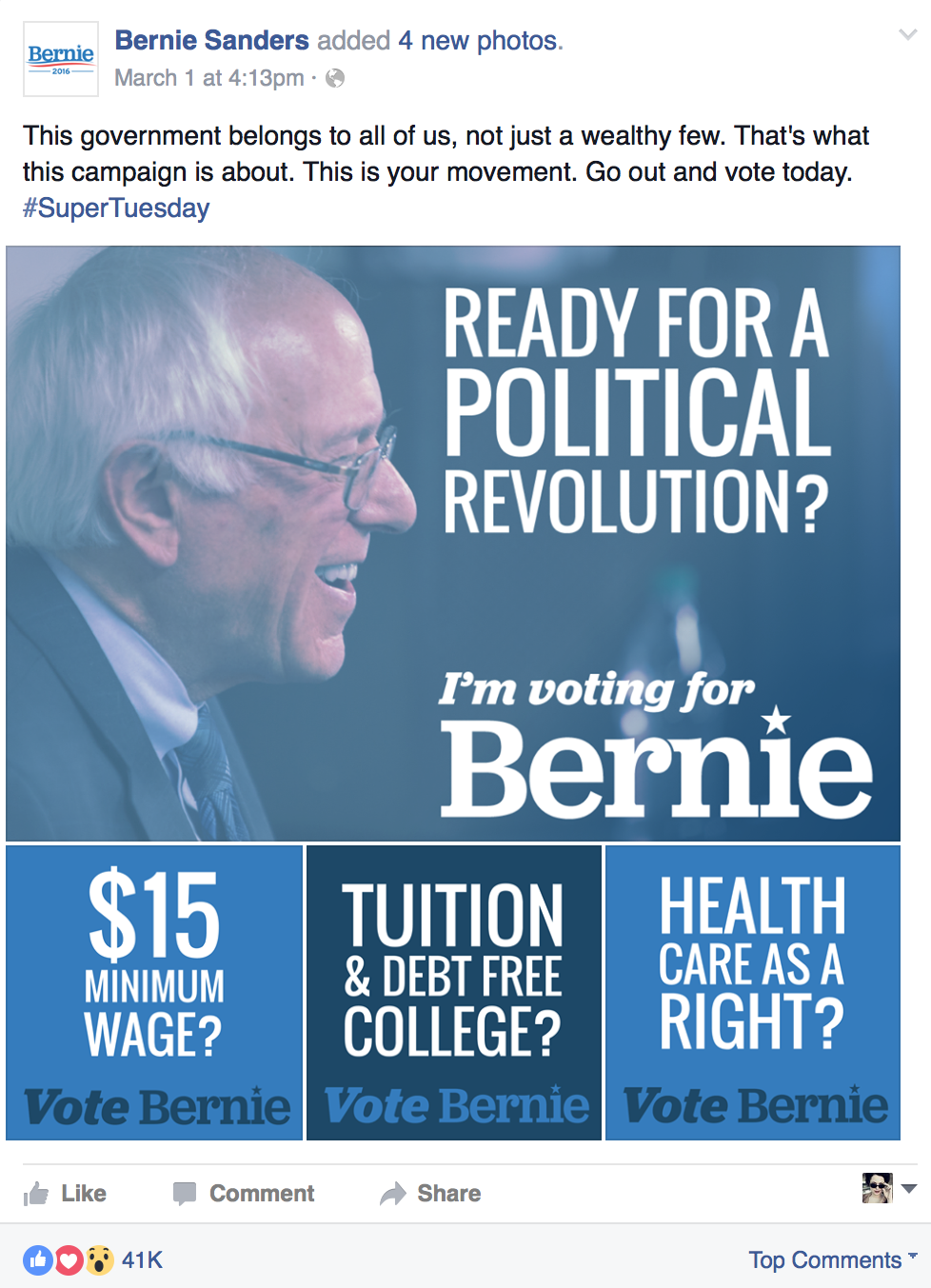 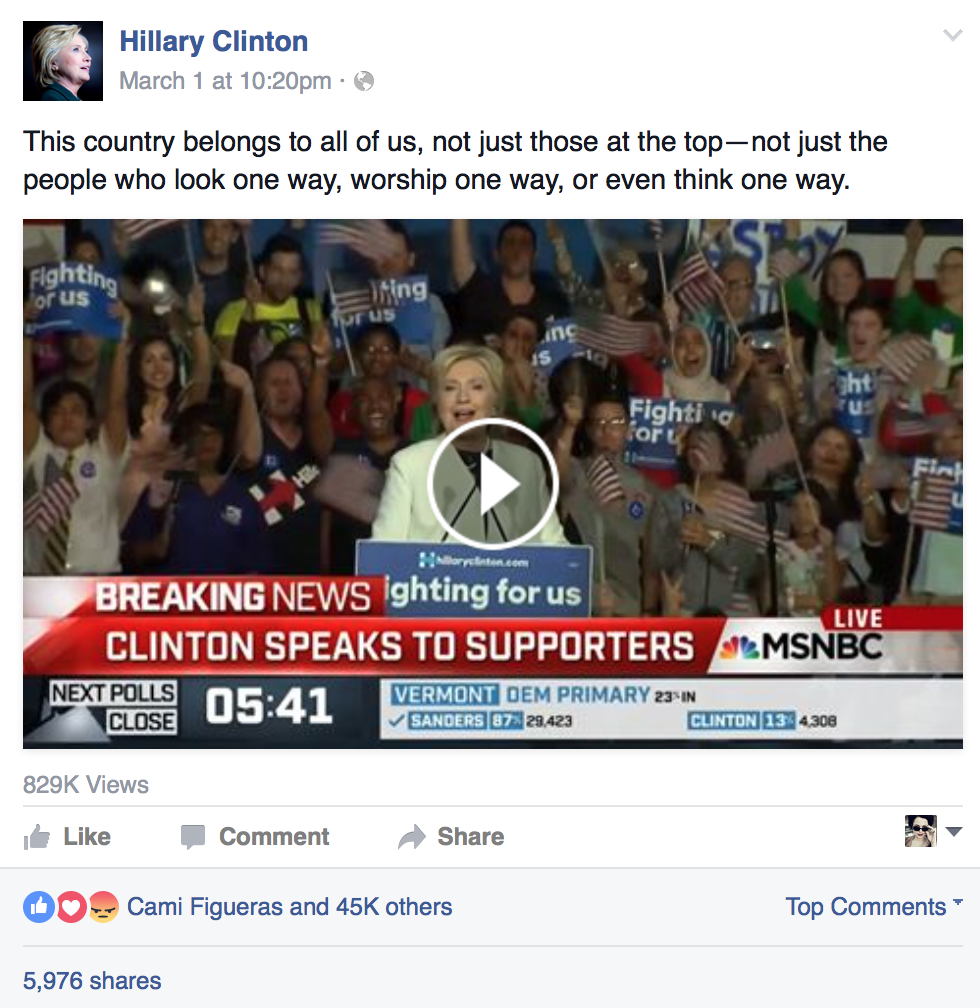 Sanders’s Facebook posts reflect a serious politician concerned about key issues.  The use of “we” positions Sanders as a man of the people, pursuing the presidency solely on their behalf. The Sanders campaign is more traditional, and those managing his social media are not attempting to create an illusion that Bernie himself is posting. The Facebook posts stay on message, repeating Sanders’ call for a political revolution. The Sanders campaign includes a modest, but steady use of Facebook, reinforcing the image that Bernie is a humble man from simple origins. Indeed, most references to other people – such as the Pope – are used as a means to introduce an issue, rather than a personal endorsement. And while legions of online supporters fuel groups such as Bernie Sanders’ Dank Meme Stash with its nearly 400,000 members, if Sanders is unable to translate his popular following into hard votes, his campaign risks being another example of slackativism.

Read More in this Series