At this point in the campaign, you might be wondering what more could be said about Donald Trump? The candidate, who last year was reported to have enjoyed “more nightly news coverage than the entire Democratic field combined”, has certainly demonstrated a knack for capturing media attention. The fact that his social media following is the largest of all candidate Pages reviewed should come as no surprise. As of the week February 13-20, 2016, according to Facebook Page insights, Trump had more than twice as many followers (See Fig. 1) and was talked about at similarly higher rates than any of the other candidates (See Fig. 2). However, it isn’t so much the size of his following, so much as how he uses Facebook to foster his image as an independent, “straight talker” that is of interest. 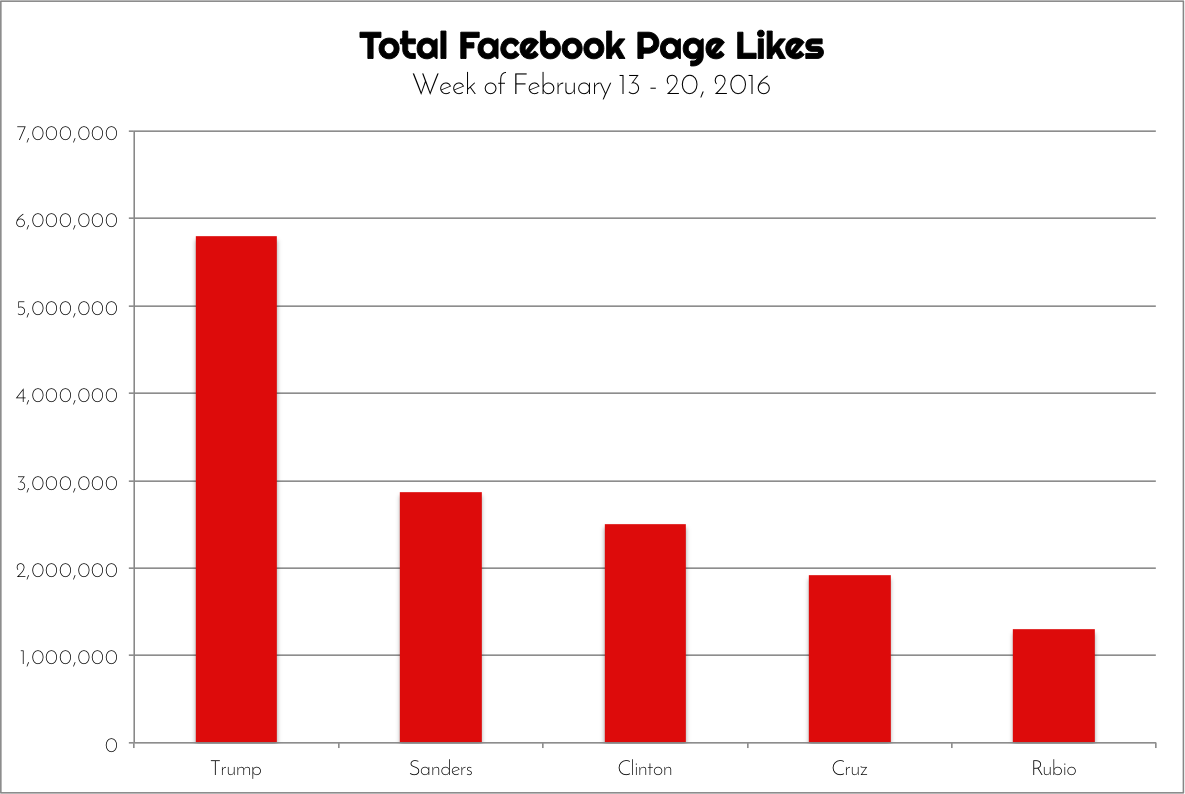 Trump has been on social media for some time, long before this election cycle. Drawing from his reality TV stardom, Trump has fostered an Internet following for years, having had an active presence on both Twitter and Facebook since 2009. Just as he speaks and behaves differently from the other candidates, Trump also uses Facebook in a rather unique way compared to his presidential competition.

For a candidate who is widely touted as being angry, Trump’s Facebook posts might be a surprise.  Of the five leading candidates which we examined, including Donald Trump, Hillary Clinton, Bernie Sander, Ted Cruz and Marco Rubio, Trump stood apart in how often he professes gratitude to his followers with 29 per cent of his 197 posts from January 21 – February 22, 2016 mentioning the word “thank” (See Ex. 1, Fig. 3). 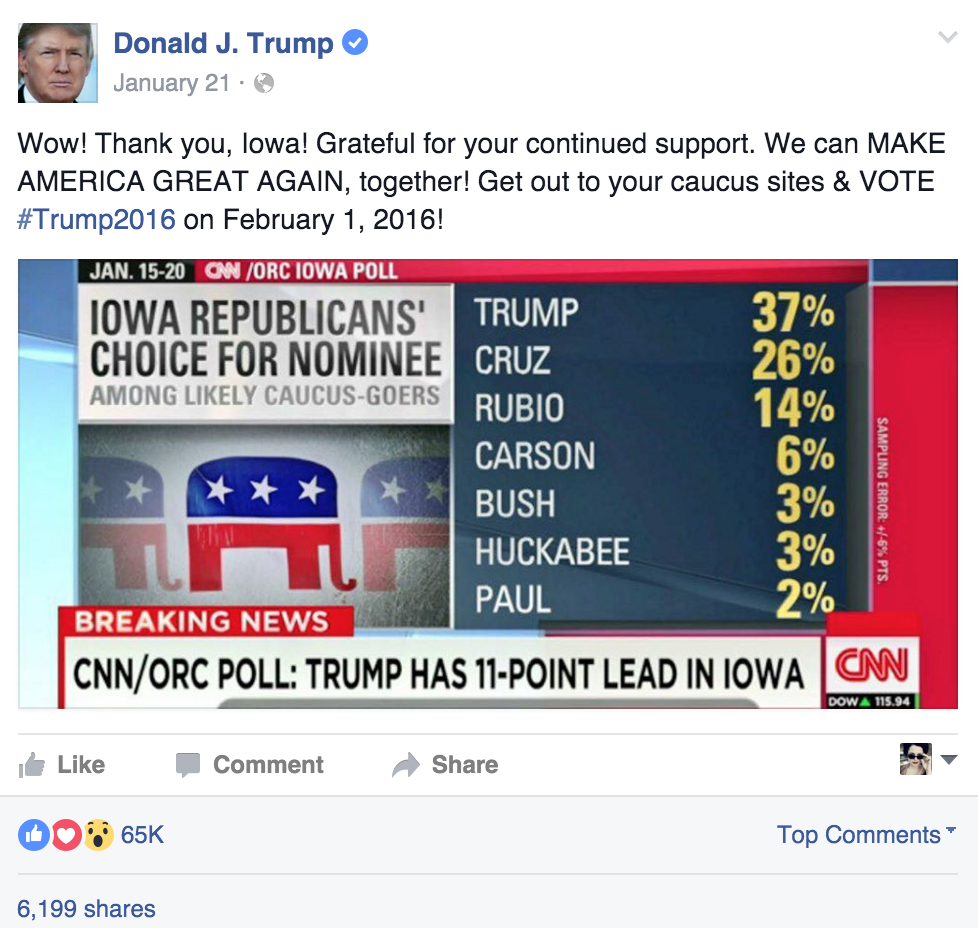 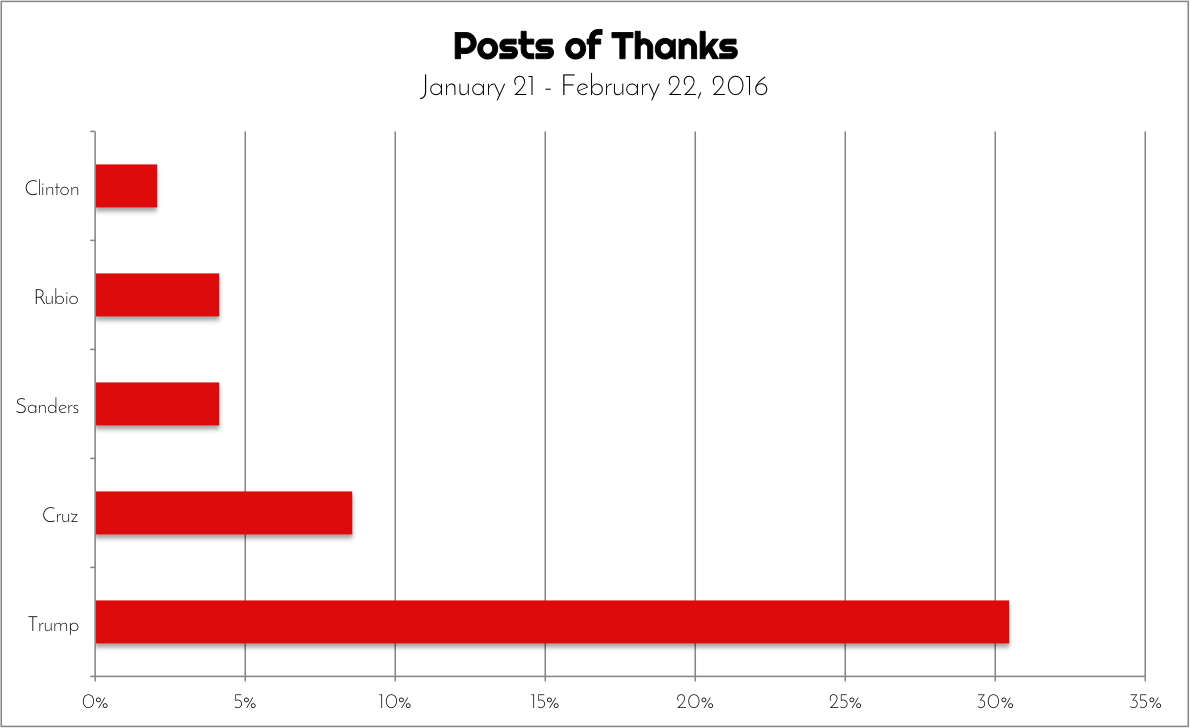 While other candidates favor types of Facebook posts that enjoy higher rates of engagement (such as sharing photos or videos), Trump’s Facebook posts, like the candidate, break with Facebook’s conventional suggested best practice for maximizing shares. 26 per cent of Trump’s Facebook status posts are plain text-only statements (See Ex. 2), and Trump uses the simple status post 6.5 times more than the next nearest candidate (See Fig. 4).

Trump might feel more comfortable using the simple status post given his experience with Twitter, (and indeed, all his status posts were made with a mobile device) but this type of post also helps foster his self-projection as a “straight shooter”, a candidate telling it like it is. Many of these mobile status posts also seem to reflect Trump’s own voice, speaking in the first-person and attacking other candidates (See Example 3).

Professional communicators tend to shy away from using upper case text or CAPS LOCK in a post – but not The Donald. One reason for this is because the use of all upper case letters in written communications takes longer for the reader to process.  Trump’s frequent usage of upper case letters in Facebook posts is unique: With 47 per cent of those posts analysed containing entirely capitalized words, Trump uses upper case letters 5 times more than the next candidate, Ted Cruz (See Fig. 5).

Besides being perceived by some as yelling, based upon our analysis Trump capitalizes words more for positive emphasis, such as “WOW!”, “THANK YOU!”, and “MAKE AMERICA GREAT AGAIN!” than to denote anger or yelling. Indeed, of the 92 posts that contained capitalization of entire words, 82 were positive and mentioned thanks, Trump’s own name, campaign slogan, or reference to voting. (See Ex. 4; Fig. 5). 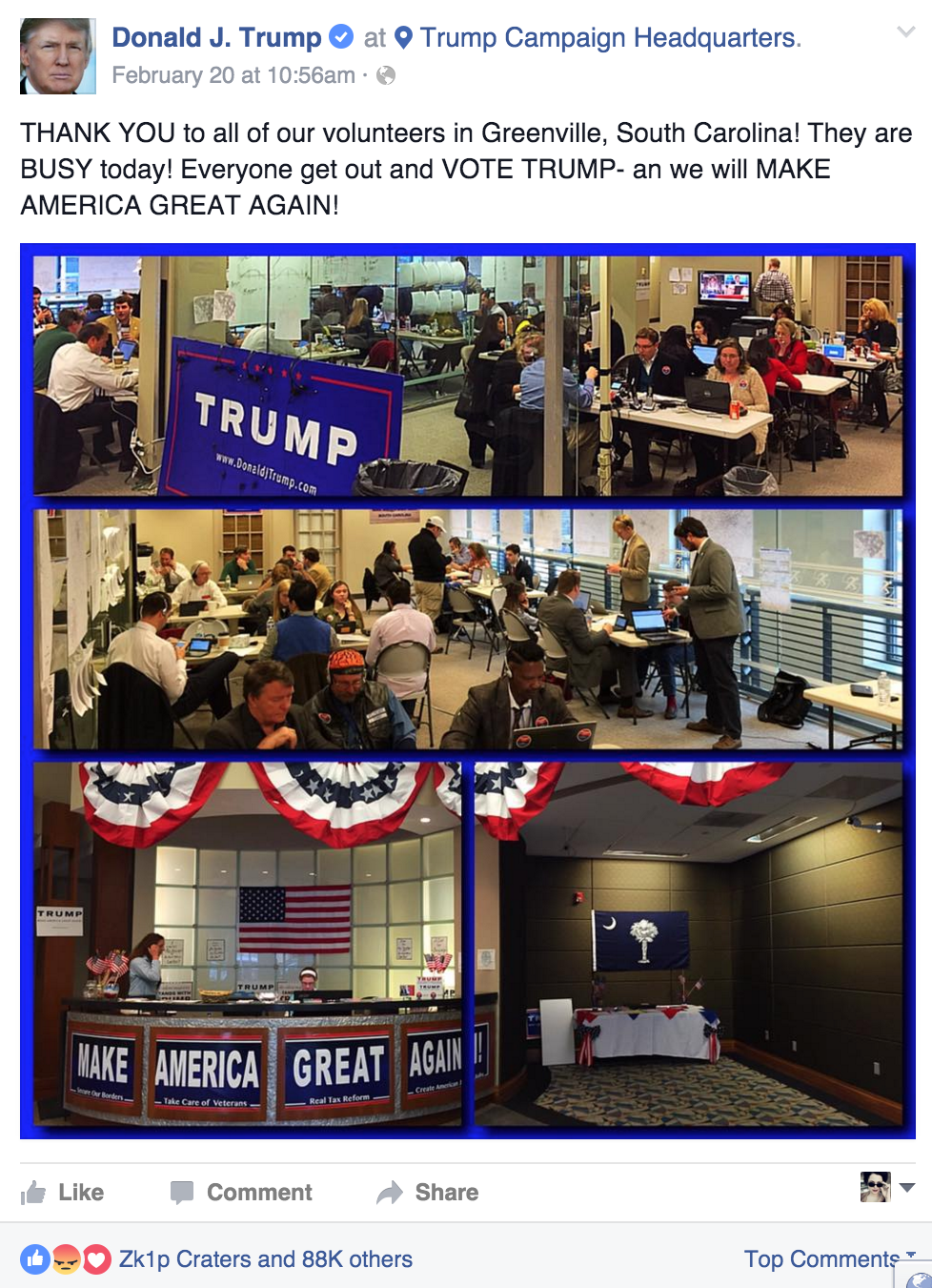 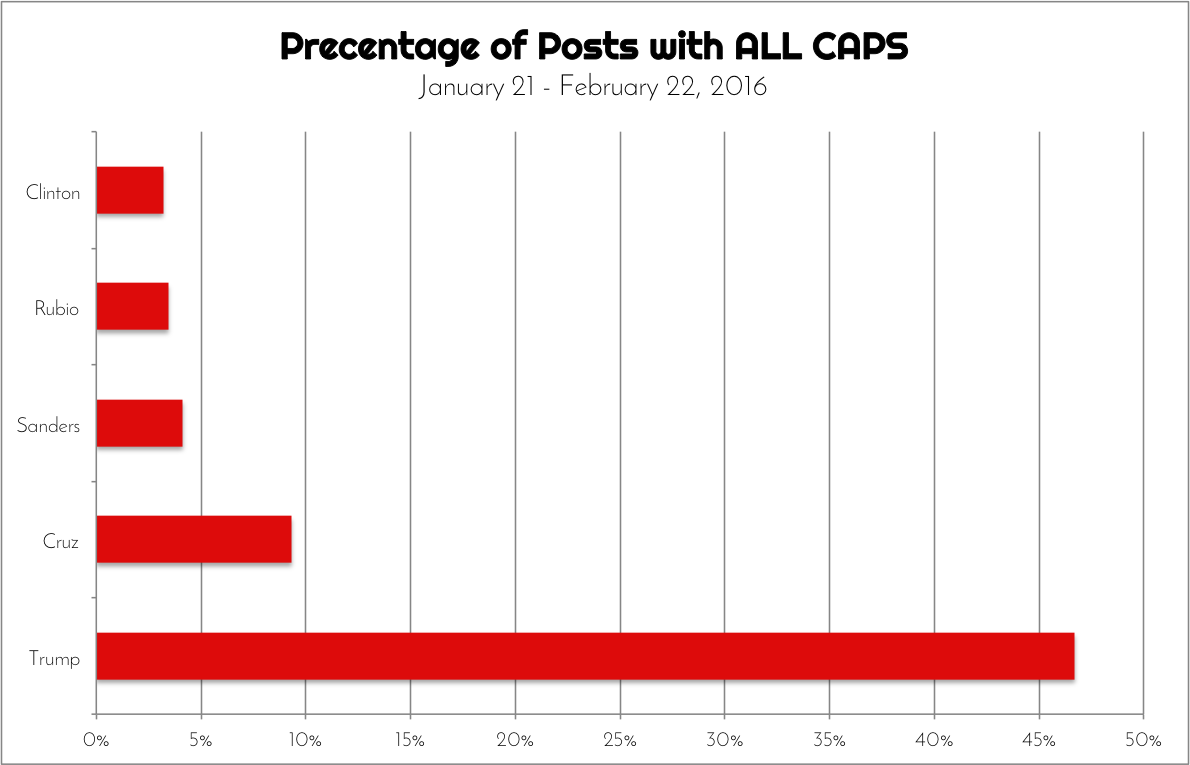 It also appears that compared to the other four top contenders in the race, Trump is better at staying on message using the words comprising his campaign slogan – “Make America Great Again!”, which were among the most frequently used during the analysed period. However, as with most of the other top candidates, Trump’s posts more often reference the campaign rather than key issues (as identified by a PEW Research poll). This is apparent in Trump’s most frequently used words as analysed by Netlytic below, but also in the manual coding of the 25 most liked Facebook posts, of which 48 per cent referenced key issues whereas 72 per cent mentioned the campaign (both could appear in a single post). 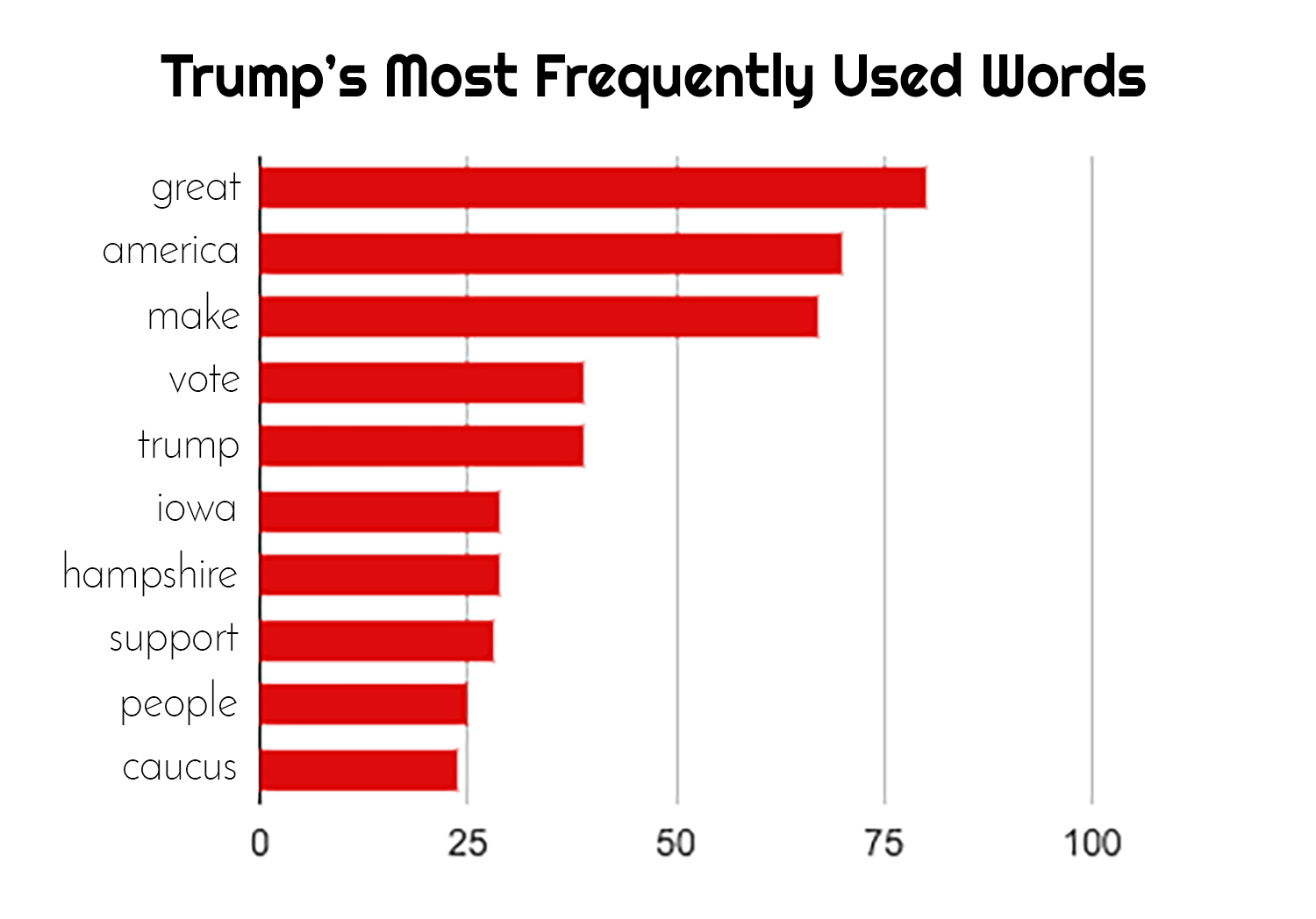 Unlike other candidates (such as Clinton and Cruz), Trump has not taken advantage of the Facebook Timeline feature. No historic dates have been added to Trump’s timeline beyond the posts.  Trump’s Facebook Page begins with his first post on April 16, 2009 (which it should be noted is a distant sounding third person status update much more like a managed Page would post, rather than his bombastic first person posts we found in February 2016).

The Trump Page has not discovered the featured Photos hack, that Clinton, Sanders, and Rubio have. In selecting larger square images, with careful text placement, these other campaigns have created collages of photos on their Facebook Page that may have a higher impact, than ad hoc picture posts.

In opting to not use these very deliberate enhancements, Trump’s Page projects a less managed image, feeding into his persona as an independent candidate going it alone.

While Trump uses more first-person pronouns (in 61 per cent of his posts), he also speaks as a collective “we” (57 per cent), and to his audience “you” (54 per cent), as shown in the table below. Trumps use of pronouns is certainly more varied than the competition. This presents a natural speech pattern, but it could also be quite calculated.

73 per cent of Trump’s posts referencing the pronoun “you” were “thank you”. In addition to his posts of gratitude, Trump has a pattern of using the “we” inclusive for posts mentioning his brand (“Let’s make America great again”), in that way he makes his campaign inclusive; and when Trump attacks he refers to himself as “I”, as in what he would do, versus what the third party opponent does. The diversity in posts is a far cry from how Trump began posting in 2009, which appeared more managed and in the third person singular voice (“From Donald Trump”), (See Ex. 6):

Trump’s use of Facebook is skillful – if nothing else, his rate of followers and Likes support this. His Facebook posts reflect his campaign style, which for some are short on issues and tend to appeal to popular desires and prejudices. In forgoing the polished Facebook hacks, such as posting images that create a featured photos collage or adding historic references points to his Timeline, Trump makes his Page seem less managed, supporting his claim of being an independent candidate. However, given that his earlier posts are in the third person voice about Trump, it isn’t likely he is managing this Page all by himself.

Trump’s Facebook postings furthers his image as a “straight shooter” by posting in the first person voice, using informal language (CAPS LOCK), and commenting in a manner reflecting how he speaks.  Taken together, Trumps Facebook posts make it seem as though Trump himself is speaking, particularly the mobile status updates, – and this is what social media was hoped to deliver, direct access and engagement with public figures.

Read More in this Series