No other candidate uses hashtags quite like Ted Cruz and his campaign– and not in a good way. It’s but one of several Facebook posting habits that indicate the Cruz campaign is not as social media savvy as the other candidates in the race – nor is the campaign really aimed at uniting the political right as the slogan once claimed.

Hashtags featured in more than half of all Cruz’ posts from January 21 to February 22, 2016. Such a high rate of tagging on Facebook is a bit peculiar unto itself. The social network only added the hashtag function in 2013 and the feature is more widely associated with Facebook’s rival, Twitter, which might explain why other candidates are not using the hashtag on Facebook as often as Ted Cruz is. (Figure 1 #Hashtags Usage) 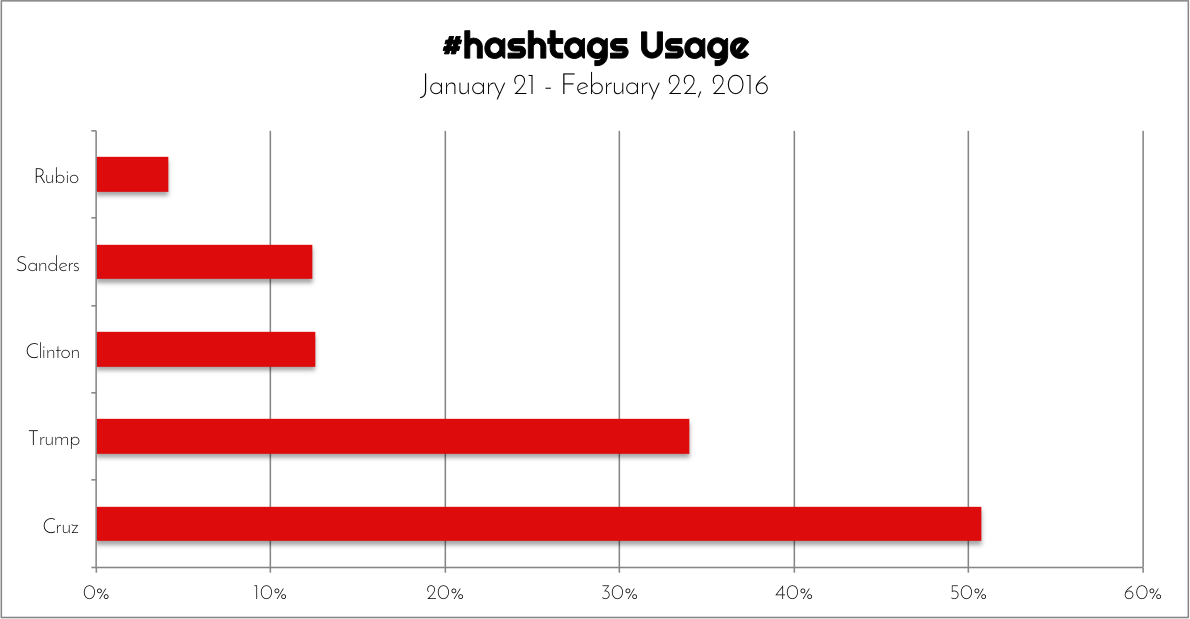 However, it isn’t just the rate of hashtag usage that stands out; Cruz is mostly using hashtags to talk about himself, as indicated by the most used terms as identified by Netlytic. While Cruz does attempt to use more common ones, such as #GOPDebate, he just loves to hashtag his name in cutesy phrases such as #ChooseCruz and #CruzCrew. Given that hashtags are more about joining in on a conversation, rather than self-love, this isn’t really an effective social media strategy. In fact, talking mostly about yourself goes against social media marketing strategies in general. 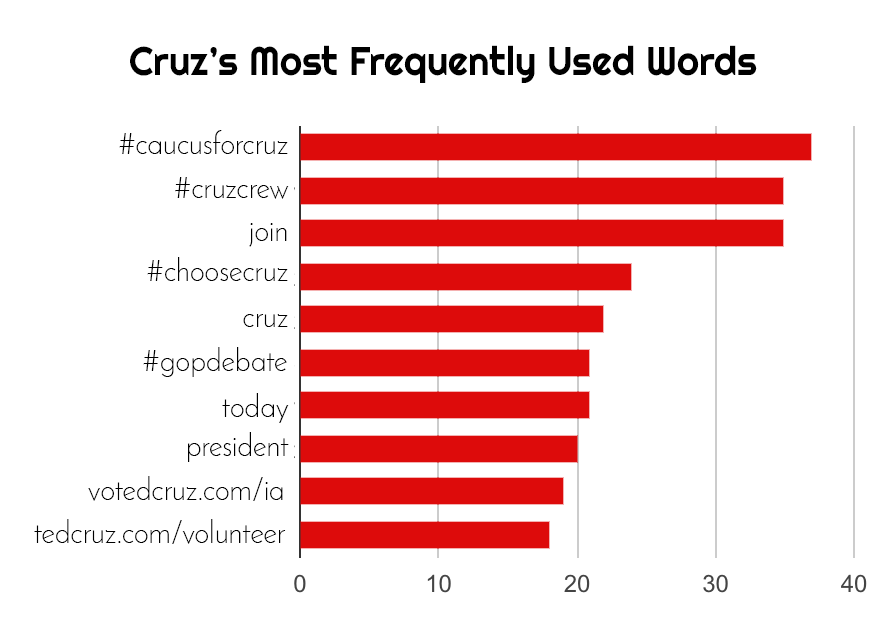 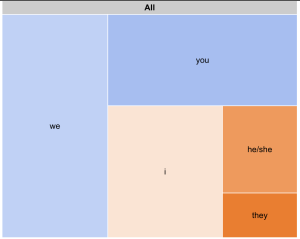 Despite a high rate of using the first person plural voice, Cruz’ high use of vanity hashtags detracts from his attempts to appear more inclusive. Indeed, if his campaign still promises that “Conservatives are uniting. This is our time.”, Cruz might consider taking a different tack in his use of hashtags, opting to pick up more on topics other people are discussing, not just tagging himself. (Figure #3 Cruz’s Use of Pronouns)

However, Cruz’ penchant for personally attacking his opponents – and tagging them in his posts – suggests that the style and content of his Facebook do not always match his campaign rhetoric of wanting to unite conservatives. Quite the opposite, through his Facebook posts, Cruz comes across as aggressive and antagonistic, attempting to draw other candidates into a social media brawl.

This aggressive approach is also reflected in many of the videos created by the campaign that attack other contenders. These videos – such as those attacking Trump by having children pretend to be him, or mocking Clinton over her private mail servers – are sleek and attempt to reflect the culture of snark that seems so ever-present on the Internet.  However, the polish and production of such content highlight the efforts of a coordinated campaign, rather than volunteer user-generated content. (Figure 4) 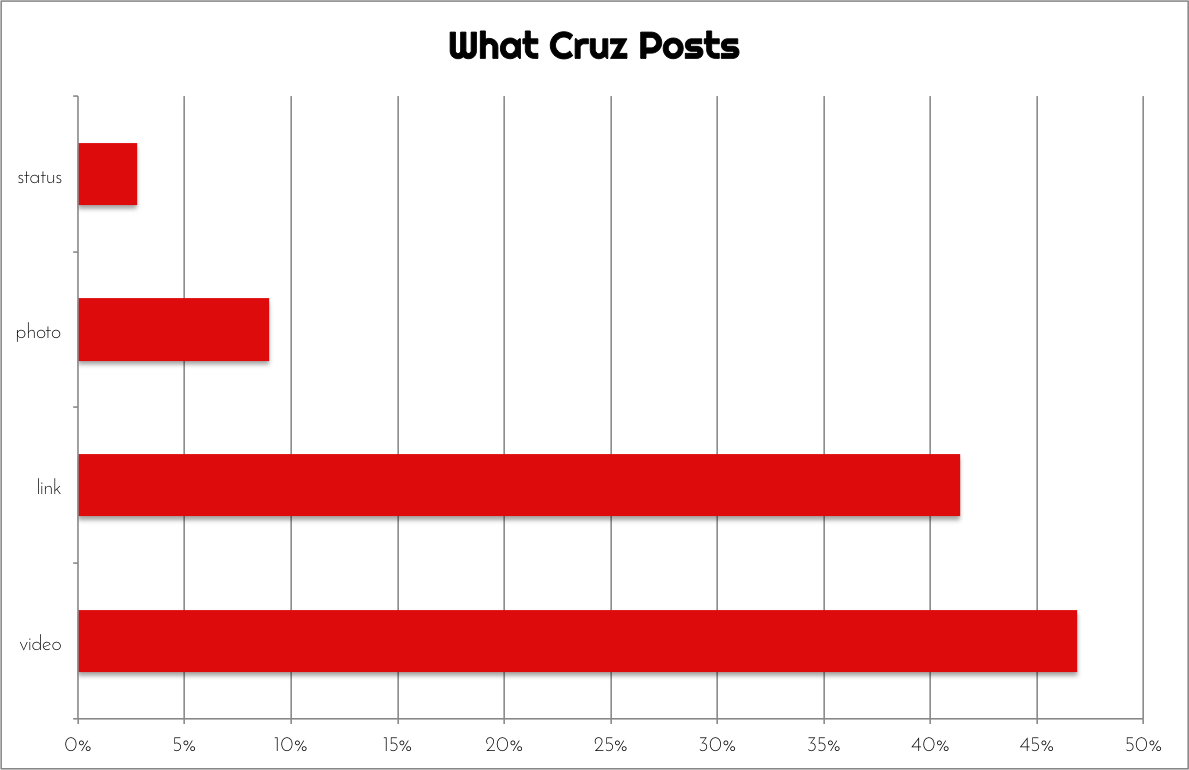 And yet, despite Cruz’ attempts to be cool online, his Facebook campaign suggests a lack of familiarity with the social network and the web. Beyond his rampant use of vanity hashtags, Cruz also included links to his website in the text of a post, even when a link had already been embedded. Cruz did this so frequently, his website address is one of the most used terms during the period studied.

The Facebook savvy know that if your webpage is structured properly with a featured image, when a link is pasted into the status update field, the social network automatically pulls up the picture and information from that web page.  If the aim is to drive traffic to a website, there is no need to include the URL within the text of the post. In fact, once Facebook has pulled up the relevant information, the link can be deleted. Leaving the link in the text of a post only detracts from the rest of the message, particularly any call to action, which would arguably be more important than a superfluous URL. However, in the #DuckingDonald post featured above, Cruz leaves the link in the post itself even after the website page has been embedded. This is a subtle difference in posting style, but one that any seasoned social media professional would catch.

However, Cruz doesn’t just include his own URLs, and thus 51% of his posts contained web domains. Of those, 19% were redundant links, meaning the link pulled up an embedded post but was left unnecessarily in the text of the post itself. For example in this Eventbrite post below:

In 4 per cent of Cruz’ posts that contain links, he opts for a basic status post, including a URL but not embedding the website.

More commonly, Cruz would upload videos or photos, or embed news stories, adding his own website as a URL in the text of the post. (Figure 5) 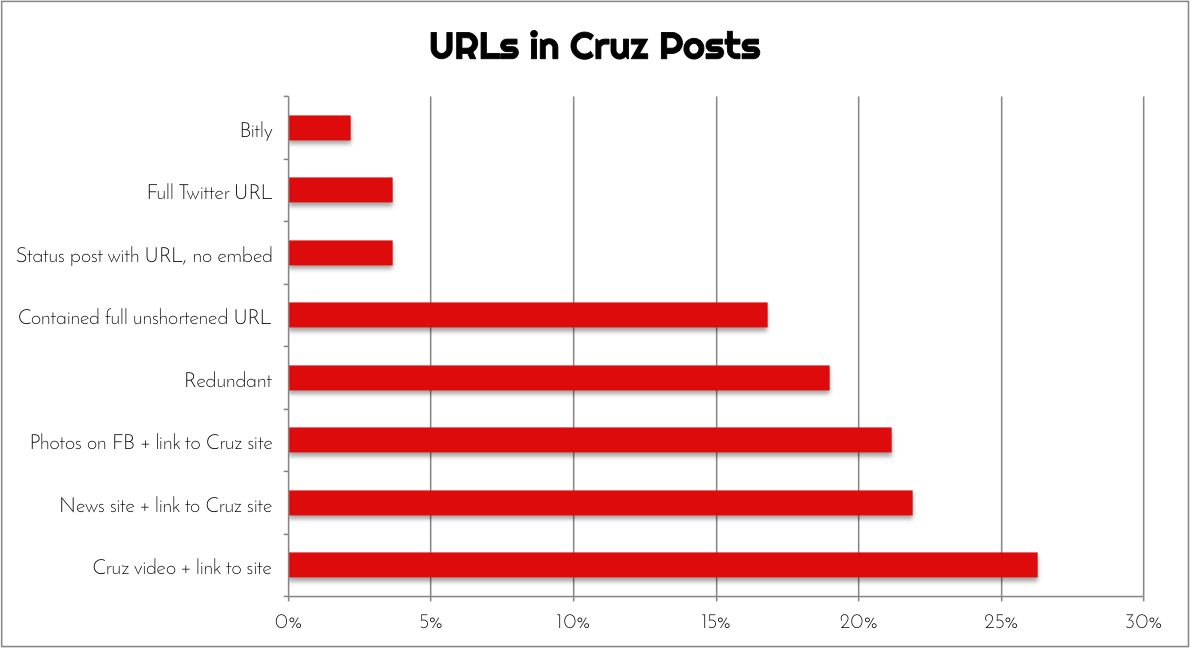 Sometimes Cruz would add multiple URLs to a single post, as shown in the example below which was also a rare instance of using a generic link shrinker (note, Clinton has a customized service with hrc.io).

Below Cruz has uploaded someone else’s photos of an event, giving credit by posting two fill Twitter URLs plus his own website.

Cruz really seems to miss the concept of a single call to action. In the example below, he distracts the follower with three types of desired engagement: First, Cruz asks followers to like the post; second, he includes a website which it is hoped people will visit; and third, a video is embedded presumably to be watched.

As with Trump, Cruz has not discovered the featured image collage hack, although he has added past moments to his Facebook Timeline and a featured Video. (Example Cruz 1 Featured Images)

The Pages Cruz has Liked on Facebook suggest he might be courting favour with the popular kids in the Party, rather than using it to project an image of a strong national network of support. (Example 2 Cruz’s Facebook Likes)

Over the course of the month studied, Cruz made 1.3 times as many posts to Facebook as did Trump – and yet enjoyed significantly lower rates of overall Page Likes and people talking about him on the network. This is partly a numbers game – Trump does have more than 3 times as many followers than Cruz. However, the Cruz campaign – while it does appear to reflect the first person singular voice of Ted Cruz – is not very social media savvy.  (Case in point, the custom Page URL even has a redundant word – https://www.facebook.com/tedcruzpage – likely because there are no fewer than three Facebook pages dedicated to Cruz.) Given the campaign’s use of vanity hashtags, inclusion of redundant links in posts, and failure to make use of all the features available, it is clear those running the Page are not innovators in the social media marketing field.  Yet that is surprising, given that Cruz has raised the second greatest amount in campaign funding to date after Clinton and has spent nearly twice as much as Trump – one would expect this would be reflected in his online campaign.