More difficult to discern are those mistruths that are fed from positions of power. Even in established democracies, there is pressure on media to carry information as provided by the government. And in a fair and free society, why shouldn’t you be able to trust what the government claims? Mix in a good dose of fear, and few will resist the urge to run with a juicy story.

It a well-known fact that humans react to fear. It is an arousing emotion, causing agitation in individuals and forcing many to seek protection whether in a large group of likeminded people or authority. Arousing emotions motivate us to do or feel something – which is similar to the aim of propaganda.

In one study on the use of fear to induce behavioural changes it was found that “regardless of what the threatened event was or how noxious it was, or how likely it was to occur, the stronger the belief that a coping response could avert danger, the more strongly people intended to adopt the communicator’s recommendation.” Put another way, it doesn’t matter how real or awful the danger, so long as we believe that something can be done to prevent it, we will likely opt for that course rather than any other. Given our propensity to spread wishful rumours, journalists will find it difficult to refuse sharing messages of some hope, where an alternative course might be taken to avert catastrophe.

Fear can be a powerful driver to encourage us to do things we ordinarily would not – such as publish a lie as fact. If we are not vigilant, especially during uncertain times, we can easily be coerced into supporting disastrous decisions. The 2003 invasion of Iraq comes to mind. 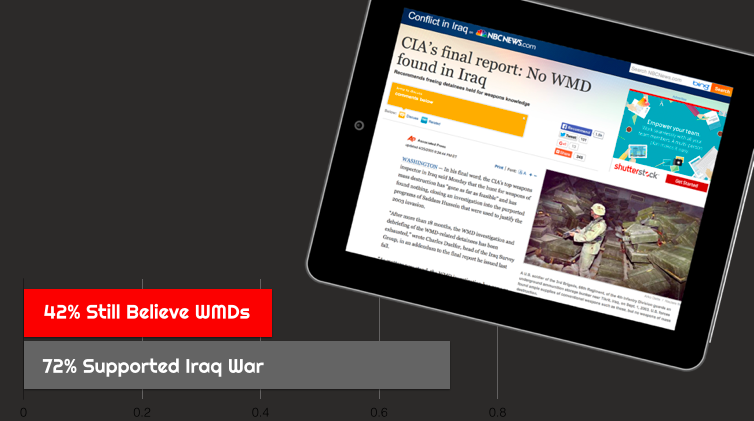 Just two years following the 9/11 attacks, the invasion of Iraq was sold to the public on tenacious links to Al Qaeda and a threat of weapons of mass destruction (WMD). Neither has subsequently been proven to be true. Quite the opposite, no WMDs were ever found in Iraq post-invasion. And it would appear that the Iraqi-bred Islamic terrorism, in the form of Daesh, has emerged only in the destabilizing wake of the war. Yet 72% of Americans supported the “War Against Iraq”. What’s more, a more recent study showed 42% of Americans still believed in 2015 that WMDs were found in Iraq.

Fear is an extremely effective measures for spreading (dis)information, especially among one’s own population.