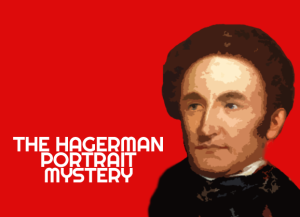 It’s been one of those winters. The kind Canadians compare to some distant snowy past from the nether reaches of childhood or beyond. Storm stranding and cabin confining, it’s the perfect season for a mystery.

Private Conservator David Legris is the man for the challenge. He’d been raised on the CSI (Cultural Scene Investigation) beat.

Like his brother, David works with the family at Legris Conservation Inc, specialising in fine art restoration.

The tools of their craft have changed considerably since his father opened up shop over 30 years ago. Worthy of a television drama, the Legris family now uses x-ray and infrared technologies to peak behind the many layers on old paintings.

When the City of Kingston called about the Hagerman portrait, David was keen. This was a painting with a past – albeit it one cloaked in mystery betraying few hard facts and details.

Neither the date nor the artist is known.

Like its subject’s personality, prominent Kingston resident Christopher Alexander Hagerman, the portrait is big, making it a rarity among early Canadian paintings. 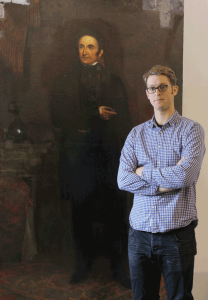 David Legris and the Hagerman Portrait

“There are not a lot of Canadians depicted in portraits this big,” says David. “The size of the portrait suggests that he was an important figure at the time.”

And indeed, Christopher Alexander Hagerman was nothing if not larger than life. The Kingston resident was known as both “Handsome Kit” and “the Thunderer of Kingston.”

Born in Adolphustown, Upper Canada in 1792, Hagerman “grew up outside the charmed circle of pupils educated by John Strachan”, notes The Canadian Encyclopaedia. And yet he rose to considerable national prominence.

Enlisting as an officer during the War of 1812, Hagerman advanced quickly acting as Lieutenant-Colonel Joseph Wanton Morrison’s aide-de-camp at the Battle of Crysler’s Farm on November 11, 1813, before being promoted to the same rank himself.

Hagerman also held the “lucrative collectorship of customs at Kingston.”

He went on to become a King’s Counsel in 1815 and established a successful law practice in Kingston. Hagerman was noted to be a talented lawyer and passionate speaker – which furthered his later achievements as “an assemblyman and leading conservative spokesman in 4 parliaments.”

As the Kingston Chronicle described Hagerman in 1826: “We have heard those who could, perhaps, reason more closely than Mr. Hagerman but very few indeed whose eloquence…is more powerful.”

Hagerman was known to be impulsive and rough around the edges. As The Canadian Encyclopaedia also explains, “a large, powerfully built man, he was bumptious and aggressive: on one occasion, he horsewhipped Robert Gourlay [a proponent of political reforms in the country].”

In 1820, Hagerman became Kingston’s first member of the Upper Canada Assembly. He was appointed as Solicitor General in 1829, Attorney General in 1837, and as a judge in 1841.

Unfortunately, nothing in his known biography refers to Hagerman sitting for this portrait.

It’s all in the clothes.

The painting was donated to the City of Kingston in 1848, leading some to believe this was when it was created.

The style of clothing suggests a different date. 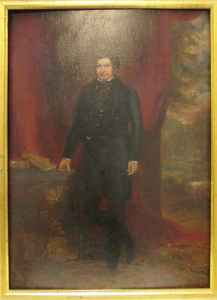 A similar sketch, housed at the Agnes Etherington Art Gallery in Kingston and also by an unknown artist, bears a striking similarity to the larger portrait. The approximate date of that sketch is 1833.

Ohio-based clothing historian Betsy Bashore estimates that the founding image for the portrait – be it the sketch or otherwise – was completed between 1826 and 1829. This estimate is based on the attire and artefacts in the painting as well as biographical information about Hagerman.

Beyond not knowing the artist, the painting itself is also of limited help in determining its date of creation. Having been largely restored twice, few original details can be gleaned.

While portraits can often indicate something about the subject’s character, David, is sceptical that much can be revealed with the Hagerman example. “In this case,” says Legris, “the landscape has been heavily over-painted and changed quite a bit. The landscape in the earlier sketch that relates to the painting is quite different.”

While on loan to the Hagerman family for a reunion in the 1890s, the portrait was significantly damaged in a house fire. This led to the first known round of restorations.

Sadly, restoration as we know it today was not always the practice of taking something back to its original state. As David explains, “instead of trying to keep everything original, the easiest way was to basically over-paint everything. It’s fairly common.” 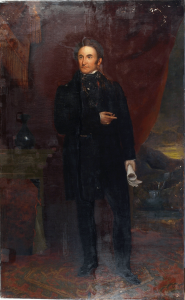 David and his CSI team in Ottawa have begun the painstaking task of uncovering what lies beneath layers of newer paint, revealing blistering from fire and water damage as well as painting details hidden for nearly 90 years.

There remains the faintest possibility that a signature could also be uncovered. “The back of the painting is a canvas glued onto the original,” shares David, “it’s possible that a signature might be on the back.”

It is an exhilarating – if lengthy – process. With a team of six, the restoration will take approximately 4 months.

Circumstances conspired to have the portrait properly restored. With the painting’s home, Memorial Hall, itself under repairs from water damage, the City decided to have the portrait serviced too. As Sarah Forsyth, the city’s Civic Collections Technician, explains, “Given the complexity and risks involved in removing the painting, the decision was made to undertake restoration at the same time.”

A public unveiling of the fully restored portrait is expected to take place this spring.