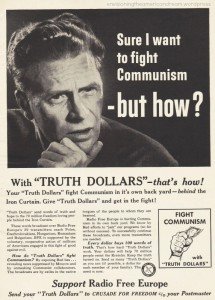 A magazine ad that ran during the Cold War.

It would seem as though talk of a Cold War between East and West has returned with the emergence of conflict in Ukraine. The ease with which old animosity and blame returned might suggest that Cold War mentalities never really disappeared, but were merely festering beneath the surface of a strained diplomatic politesse.

Such a thin veneer of acceptance between Russia and the United States shouldn’t be that surprising. After all, decades were spent convincing their respective populations that the other was wrong, if not outright evil. Indeed, if popular suspicion were to have suddenly dissolved with the fall of the Soviet Union it would have been a major failure for the considerable propaganda machinery on both sides of the Cold War.

Mutual suspicion between Americans and Russians is increasing.

Responding in kind, 73% of Russians answering a poll in December 2014 said that the U.S. has the “most hostile and tense relations” with their country. 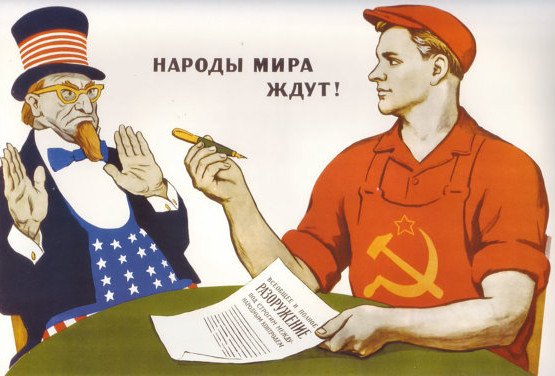 And while their opinions of each other continue to degrade, perspectives on a variety of matters increasingly diverge as well. On the MH17 tragedy, for example, 46% of Americans believe that the Russian government or military was in some way involved. Conversely, 82% of Russians believe that either a Ukrainian army anti-air missile or jet caused the MH17 disaster.

Perhaps what is more interesting is on how little such mutual distrust must be based. After all, how many Americans have actually spent time in Russia – and vice versa? At a high point in American tourism to Russia, some 0.06% of U.S. citizens travelled there in 2013. Russian travel to the U.S. is only marginally higher with around 0.23% of the total population visiting in 2013. With such minimal cross-visitation, what can regular Americans and Russians really know of each other through first-hand accounts?

Likewise, coming to any conclusions on what is happening in a distant conflict can only be based on third-party information sources, such as media, or through experiences shared by émigrés whose own perspectives grow more distant with time and space. 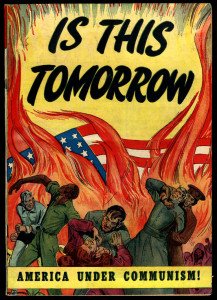 For example, even fewer Americans travel to Ukraine (some 0.04% of the total U.S. population visited in 2013) And only 16% of Americans in one study could accurately identify where Ukraine was on a world map.

While Russians have visited Ukraine in greater numbers (7.17% of the total Russian population went in 2013), many in the West argue that Russian media sources are restricted to state-owned or affiliated outlets, such that if 90% of Russians turn to television as their main source for international news, their perspective could end up coloured.

With such little personal experience on Ukraine and each other from which to draw, it would appear the increasingly divergent opinions on both sides of the U.S.-Russia divide are fed entirely through mass media or third-party sources. And in reading coverage from both Western and Russian sources, it is apparent that the viewpoints could hardly be more opposed.

There was a brief interlude of friendly relations. On the Russian side, from 1991 to 1998 the perspective on the U.S. was increasingly positive, until the disastrous financial crash – for which many Russians blamed the West. Opinions improved again until the Russian-Georgian conflict in 2008, on which the U.S. quickly took the side of Georgia.  As for American opinions of Russia, perspectives improved in fits and starts, peaking in 2006, followed by a steady decline until 2013 and the events in Ukraine, which corresponds with a plummet in American sentiments of Russia.

The conflict in Ukraine has been held as the catalyst for disintegrating East-West relationship, but the suddenness and severity of the rupture ought to suggest an underlying issue – a deep mistrust of each other well-indoctrinated into both populations over decades of Cold War propaganda. Sides were quickly taken as to who was victim and who was aggressor in the Ukrainian conflict. (Indeed, sides seem to be quickly taken whenever there is geo-political turmoil involving Russia, seldom in each other’s favour.) The ease with which both Russia and the West blamed each other, and their respective populations accepted that the other was guilty, is not indicative of a warm and trusting relationship. Indeed, more plausibly it suggests a deeply held mutual suspicion fed by systematic propaganda, a distrust now re-emerging from a brief thaw. 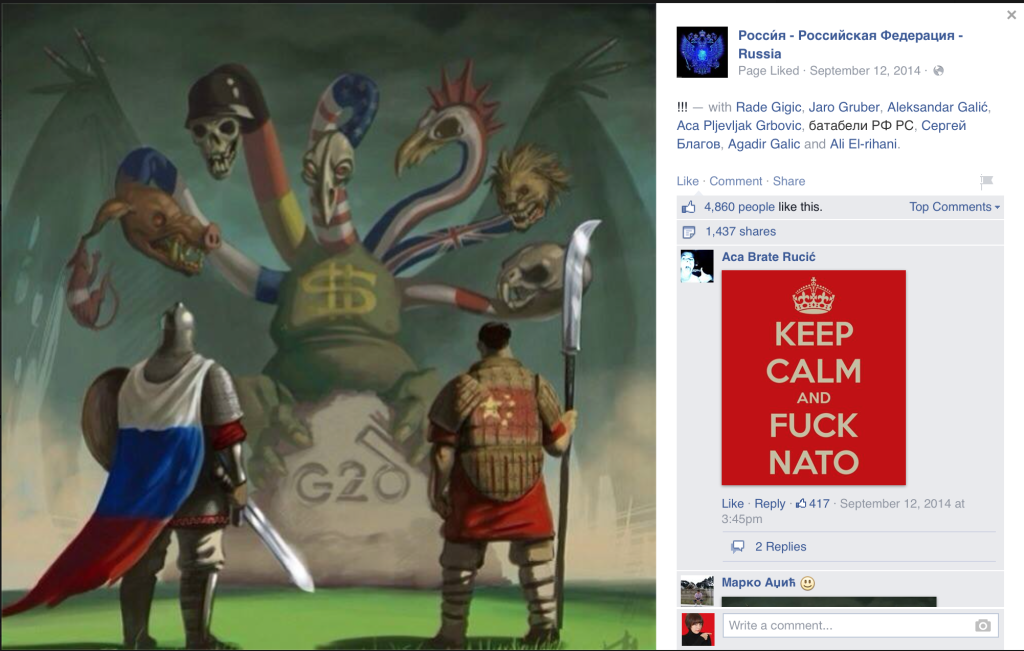 This is not to say that one side is right or wrong. I cannot pretend to know what is happening or has happened in Ukraine. My sources are the same third-party coverage that feeds both East and West. Somewhere in the middle a truth must lie and will eventually emerge.

Alas, while this clash of societies and opinions might indicate success for a sustained information campaigns that spanned decades of Cold War, it means disaster for everyone caught in the midst of the conflict and ever-more susceptible to the lure of nationalism, inter-ethnic hatred and violence. As sides continue to be taken and the conflict heats up, regular people in Ukraine will suffer, and propaganda that seeks to foment war will only find a more receptive audience.

Header image based on Toonstyle.com/Shutterstock.com graphics