Understandably, much of the world is trying to make sense of Donald Trump’s presidential victory on November 8, 2016. Much of this reckoning takes the form of finger pointing and blame: it’s the media’s fault; the social networks let people create distorting echo chambers; of course, it was the FBI; no, Trump soared on a “global white backlash”. Others pointed out that it was “Clinton’s loss, not Trump’s win” – and there appears to be some truth to that.

The 2016 U.S. Presidential Election was one I watched closely.

As a researcher and analyst of propaganda, I had been keenly tracking the 2016 U.S. presidential campaigns in terms of persuasion – particularly after democratic action led to a Brexit win and a rejection of a FARC peace deal in Colombia. It seemed to me that, at least in these examples, populist campaigns were gaining traction in an interconnected Digital Age where people feel uncertain about their future, but also have easy access to information supporting their existing views. Thus, early on, I recognized Trump’s potential for tapping into public malcontent and popular American narratives and maintained there was a strong chance he could beat Clinton in an election. In an article published in January, I outlined how Trump was using Sociological Propaganda to gain support.

As part of a research team at Ryerson University’s Social Media Lab, I also worked on a study analysing campaign Facebook posts published between February 1 and July 28, 2016. The paper, Unpredictably Trump: Predicting Likes on Candidate’s Facebook Posts During the 2016 U.S. Primary Election, involved looking at campaign posts both qualitatively and quantitatively, while also using regression analysis to identify Like predictors. This research led me to some observations about the Clinton campaign, particularly vis-à-vis Trump’s, that raised doubts in my mind of her ability to win the Presidential Election in November. By March, after an initial review of Clinton campaign Facebook posts I had begun to speculate that the overly professional, formulaic approach taken by her team could very well cost Hillary the election.

Much of the reason why the election results were not surprising came down to the different styles of campaigns. One was clearly more inspiring and polarising than the other. Take the campaign slogans and displays of gratitude, as two examples.

One would have to have been living under a rock without any connectivity this past year to not know Donald Trump’s campaign slogan – but was Hillary Clinton’s as memorable?

As early as October 26, 2015, Donald Trump had staked claim to “Make America Great Again”, when news broke of his purchasing the trademark rights from a disc jockey. Trump’s campaign remained steadfastly committed to this slogan throughout the Primary and Presidential elections. Indeed, in a Word Cloud featuring the most used words posted to Facebook by the Trump campaign during the Primary Election period, the slogan clearly stands out. 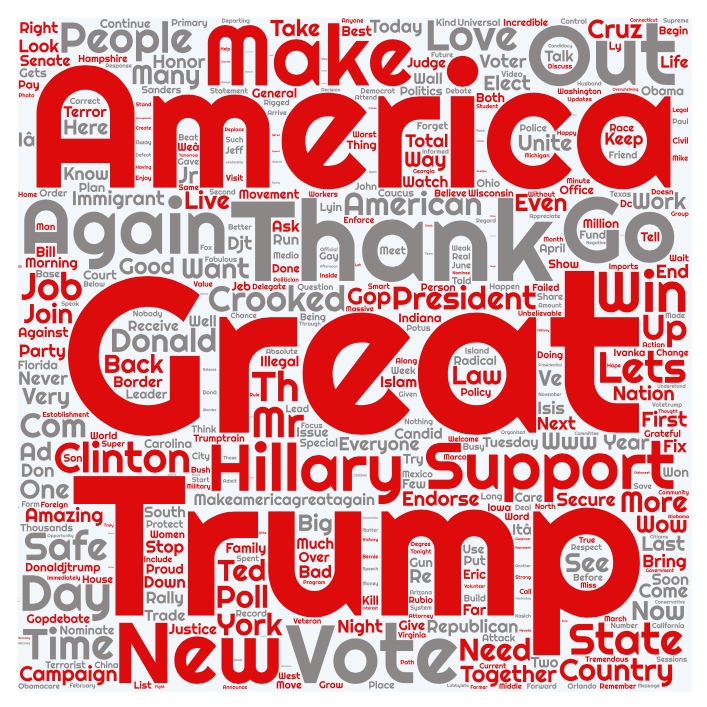 Hillary Clinton’s campaign, on the other hand, cycled through slogans like a pop star does wardrobe changes in a live concert. When we began our Facebook study back in February, Clinton’s campaign slogan had been “Hillary for America”. Before the November 8th vote, Clinton would try “Breaking down barriers”, “Fighting for us”, and “I’m With Her,” before finally settling on “Stronger Together”. (And if these were not uninspiring enough, the campaign tested 84 other slogans according to an August 8, 2015 email leaked by Wikileaks, some as cringeworthy as “Real Fairness; Real Solutions”.) Clinton’s Word Cloud of Primary Election Facebook post content, as a result, is utterly devoid of a campaign slogan. 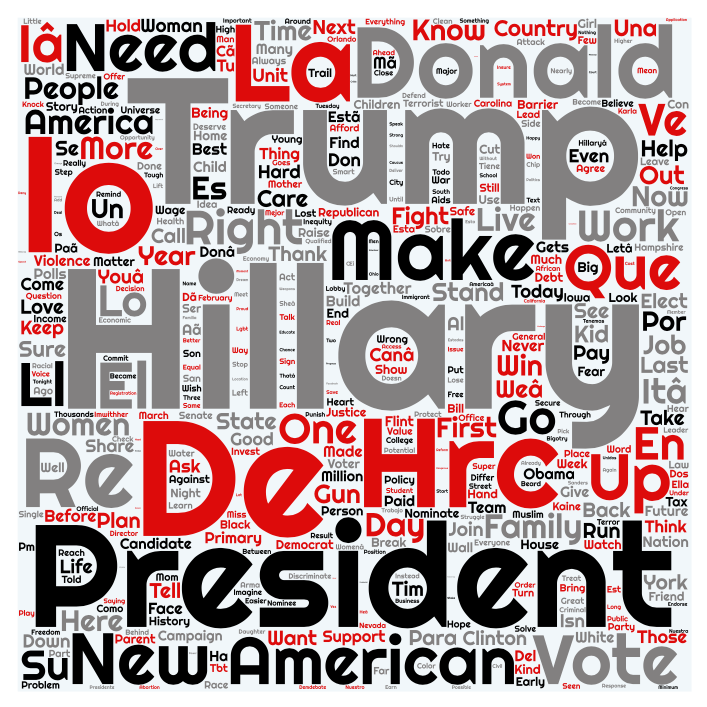 A campaign slogan, however, is a lot like a brand – the aim is to impress upon a target market a memorable concept that easily and readily comes to mind when voters think of that candidate. To achieve this, a campaign slogan must be fixed and immutable for the duration of that election period. Moreover, the more something is repeated, the more believable it becomes – as a result of the faulty heuristic known as the availability cascade. Thus, repeating a single campaign slogan over and over again is in the best interest of the candidate – whereas switching slogans is detrimental.

Nothing More Than Feelings

Beyond being consistent, a successful campaign slogan will be more than just memorable, but inspiring and galvanising, inciting voters to action. A good campaign slogan will resonate with the target audience, reflecting their current emotional state in such a way that they feel compelled to participate in the elections. Ideally, a campaign slogan will also allow voters to feel part of something greater than themselves, inspiring individuals to become part of a movement to support that candidate.

In all of this, Trump’s campaign succeeded in just four words. With “Make America Great Again” Trump:

It really didn’t matter whether America was still great or would be again, Trump’s campaign slogan struck deeply at what many Americans had been feeling – while also promising a hope that things would be better. The constant repetition of this slogan – both by media and Trump – only helped to reinforce this idea as a strong possibility in the minds of those who believed.

I Bet You Think This Song Is About You 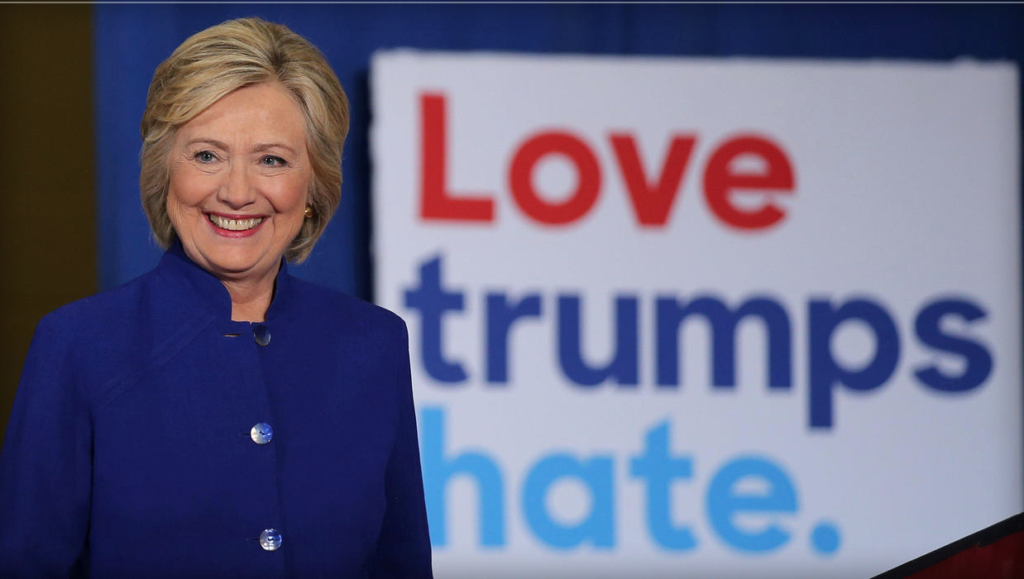 Conversely, Clinton’s slogans were mostly about her: “Hillary for America”, “Fighting for us”, and “I’m With Her”. By the time the campaign settled on “Stronger Together”, Clinton’s message had turned to focus so much on defeating Trump, that in many ways her campaign was only providing her competitor with more airtime. As if the cycle of uninspiring slogans wasn’t confusing enough, Clinton’s campaign began playing on words in an attempt to belittle Trump, and in some ways further associate him with “hate”.

And that’s just it. As much as Clinton’s campaign was about herself, it was also about not voting for Trump – neither of which was focused on the wants and desires of her target audience, the American electorate. In other words, Clinton failed to offer an inspiring message that could encourage Americans to collective action. Instead, as her Word Cloud above indicates, she talked more about Trump than what a future with Hillary would entail.

There were many differences between Trump and Clinton’s campaign Facebook posts – many of the singularities of Trump’s are covered in our initial qualitative analysis published back in March.

In Trump’s Primary Election Facebook posts, his campaign mentioned the “Make America Great Again” slogan by itself or as a hashtag in 25.13% of his posts. Clinton, on the other hand, mentioned her slogan or its hashtag (which at that point appeared to be “I’m With Her”), in just 2.61% of her posts. A greater effort was clearly made by the Trump campaign to use and remain consistent with its slogan, than was done by Clinton’s.

However, something else stood out – and it first appeared in the initial qualitative analysis, again in the Word Cloud, and then also in a simple count comparison of Primary Election Facebook posts: Trump showed gratitude considerably more than Clinton did. In 30.15% of his Primary Election campaign Facebook posts, Trump used the word “Thank”, whereas Clinton did the same in just 4.75% of her campaign posts. Not only did Clinton fail to provide a consistent and inspiring message that reflected her audience’s current emotional state, her campaign also failed to show gratitude to her following in her posts.

It might seem like a trivial thing, but a little thanks can go a long way. According to one study, showing gratitude to supporters or employees increases their output by 50% – and in an election that was this close, every bit of support counted. For Trump, showing thanks might have given him that much more of a boost over Clinton.

Clinton’s lack of an inspiring, repeated message and fewer displays of gratitude for her following, might help account for her lower rates of being talked about on Facebook and gaining Likes on posts.

Some of Trump’s increased Facebook love might be accounted for in his greater number of page followers. During the Primary Election, for example, Trump enjoyed an average of 2.3 times the total number followers Clinton did. However, on average Trump’s posts garnered 3.9 times the number of likes Clinton’s posts did. What’s more likely, then, is that the content posted by the Trump campaign resonated better with his audience more than did the content Clinton’s campaign posted to her following.

Obviously, there are many factors that go into winning an election – and all of this analysis is not to discount the roles of economic instability, political correctness, misogyny and more in shaping the popular vote. To this communications professional, however, the absence of a consistent and inspiring message, coupled with a lack of gratitude, suggest that the Clinton campaign very much struggled with understanding its target audience. This inability to make the campaign truly about the people surely had an impact on Clinton’s ability to win the election – and future candidates should take note.