This article is part of a series called Facestumping? Presidential Campaigning on Facebook

A Charge(!), in military terms, is a battle manoeuvre whereby combatants rush at each other at top speeds to engage in close fighting. Online, in the hotly contested American election, Facebook is shaping up to be a place where this classic military manoeuvre is playing out for all to see. Passionate supporters are charging onto the social networking site, egged by their favorite candidates and inflamed political rhetoric, posting across candidates’ Facebook walls, showing their support – but increasingly also their disdain.

The fact that social media is playing an active role in the 2016 US Presidential primaries is far from surprising.  After all, Barack Obama’s unexpected surge to victory in 2008 has been widely attributed to his campaign’s ability to “rally the troops” both online and off. As part of the Ryerson Social Media Lab’s ongoing research on how social media is changing the ways in which people communicate, we collected publicly available posts made to the official Facebook Pages of Clinton and Sanders, to examine how supporters (aka the ‘troops’) of both behave on the social network. Specifically, we wanted to know whether these followers only defended the home front (posting messages of support to their preferred candidate’s page) or whether they also charge into enemy territory (attacking the opponent on the competition’s own page).

For the purpose of this exploratory analysis, we used Netlytic, a cloud-based social media analytics platform developed by the Social Media Lab. We collected a dataset containing Facebook messages posted on the official Clinton and Sanders Facebook Pages by their followers between February 7 and March 27, 2016. In total, we collected over 26,126 posts (16,201 from Clinton’s page and 9,925 from Sanders’).

We then isolated the content of those 354 people who posted to both Clinton’s and Sanders’ Pages. We took a random sample comprising 30% (or 105) of those users and manually coded their posts into the following four categories:

Of the 105 people who had commented on both Hillary Clinton’s and Bernie Sanders’ Facebook Pages, 72 posted negative statements against Clinton, whereas only 23 attacked Sanders. Out of those same 105 users, 60 expressed support for Sanders, whereas just 19 did so for Clinton.

WHY SANDER’S SUPPORTERS ARE PLAYING OFFENSE?

While attacks were made to both candidates’ Facebook Pages, more were made against Clinton and in support of Sanders. At first glance, this seems quite odd when comparing total Facebook Page “likes” – as of March 26, 2016, the two candidates had comparable followings: Sanders with 3,561,288 likes, to Clinton’s 3,015,789. However, other publicly available Facebook metrics suggests Sanders is dominating in a numbers game elsewhere.

Since we began aggregating data in February, Sanders has consistently enjoyed higher rates of being “talked about” on Facebook.  The “talking about” statistic on Facebook can be found in the “Likes” section of a Page, and is an amalgamated measure of engagements including a shares, posts, RSVPs to events, and recommendations.

We also reviewed the potential reach of both candidates through Facebook’s Ad Manager. To do this, we set the ad criteria to include all users aged 13 years and older located within the United States, who had an interest in each candidate. (Facebook defines “interest” as “People who have expressed an interest in or like pages related to a topic” or in this case, a presidential candidate.) Surprisingly, Clinton had the lowest potential reach of any of the leading candidates with 1,500,000. Sanders, on the other hand, was projected to have a potential reach of 9,700,000, along with Donald Trump. 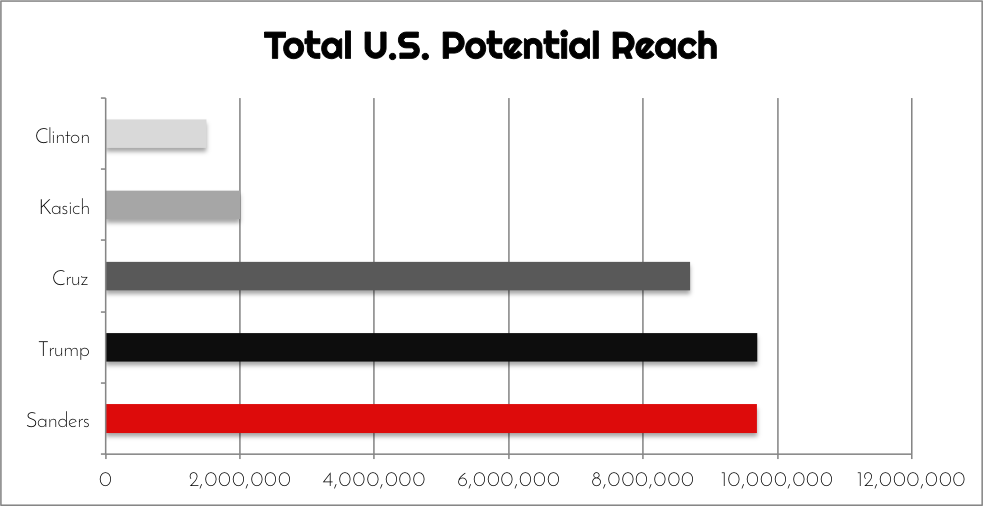 Thus, despite comparable Page Like statistics, according to Facebook Ads, Sanders enjoys a potential reach over 6 times greater than that of Clinton. Moreover, half of Sanders’ potential reach (55% or an estimated 5.1 million) on Facebook are to Millenials (which Facebook defines as “people who were born between 1982 and 2004”), arguably the most connected and tech savvy generation to date. See the chart below. Millenials are also twice as likely as those aged 55 years and older to engage in trolling behaviour online, according to a 2014 survey by YouGov. Clinton’s potential reach to Millenials on Facebook is a paltry 36% (or just 550,000 users). Thus, it is not surprising that Sanders supporters are more likely to be attacking Clinton on her page than Hillary’s supporters attacking Sander on his page.

According to Facebook Ads, Sanders’ Facebook army could be substantial –the potential reach that was interested in both Sanders and Clinton totalled 450,000. If our initial findings hold in a wider data set, and 57% of those users displayed similar tendencies to those in our random sample, the Sanders supportive army could number 256,500.