Oh, LinkedIn Influencers, why do I read thee? Obviously, it’s because we’re told the key to using the social media platform successfully is through participation, but  finding something worthy of comment is often a chore. At least today’s reading, on Martha Stewart no less, has led to the following 7 Social Media Sins.

Picking on poor Ms. Stewart for a little while longer. If you haven’t heard, first, congratulations, surely your world is a rich one, and second, forgive me for lowering your standards. Martha broke her iPad and then had a bit of a Twitter hissy fit. Some might say more colourfully, her cheese done slide off the cracker. I digress, see the twitrade here.

The silly affair has me thinking about basic behaviour on social media. Perhaps we can agree on the following sins, best to be avoided when networking. 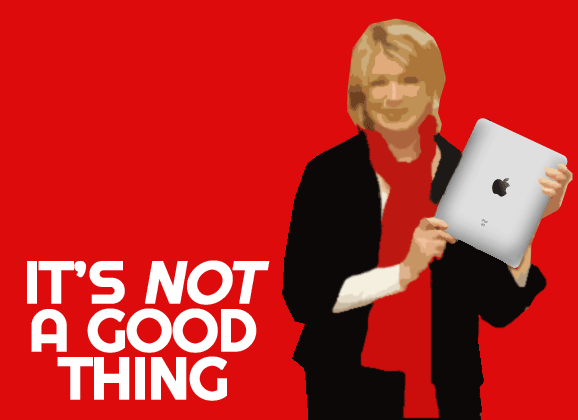 Lazequiry: Ask not what can be Googled easily. Ms. Stewart committed this sin in her first tweet asking what to do with her broken iPad. It would have taken her just as much time to search her query as it would for someone else to respond to it. Clearly prison has taught her nothing in humility or self-dependency.

Oversharing: Just because you can share, doesn’t mean you should. If Apple did agree to pick up the delicate Martha’s iPad, they were offering her service beyond what mere mortals enjoy. Martha ought to have been grateful at her preferential treatment and bit her tongue. I can imagine the direct messages from Apple on that one… Of course, the sin of oversharing can just as readily be applied to bodily functions, food consumption, exercise levels, and embarrassing tales of offspring.

Monotony: Saying something once is often more than enough. Ms. Stewart spewed 7 more topical tweets beyond the first two referenced above, unnecessarily polluting the Twitterverse. This is to say nothing of the 2895 retweets received as a result. That kind of tweeting is right up there with reposting the same link to your website – over and over again. (And seriously, as much as I want to post my resume on Twitter or LinkedIn again, it would just be wrong.)

Exclamexcess: Two punctuation marks are not better than one. Adding extra question marks does not make your inquiry more urgent. Multiple exclamation points only lends a touch of crazy.

Grammarcide: Communicating over social media does not give you a pass to kill proper grammar. Capitalize your sentences. Spell and use words correctly. Punctuate, sanely. Learn how to use personal pronouns. For the sake of humankind, review your posts before clicking send! (Note the single exclamation point.)

Vanity: It’s not all about you. (Some sins remain constant between the real world and the digital realm.) As the universe does not hold you at its centre, put not yourself first in social media channels. Connect, then share. Are all your posts simply about you? Have you reviewed your LinkedIn profile lately – do all the paragraphs begin with “I”? In just 9 tweets, Martha uses the first person singular pronoun (I, me or my) 22 times.

Proflinkation: Stop spreading your unwanted links via direct message. While Ms. Stewart didn’t commit this during her twitrade, it must be included in the 7 Social Media sins. Just because someone followed you on Twitter, does not mean they want to befriend you on Facebook or visit your website. Couching your request in friendly terms masks not your spam.

We’re all sinners and so I throw not a stone here. That doesn’t preclude us from trying to communicate better.

Committing these sins, it’s not a good thing.